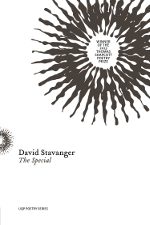 The Special by David Stavanger
UQP, 2014

David Stavanger won the 2013 Thomas Shapcott Poetry Prize. The resulting book, The Special, is his first full-length collection of poetry, and is dedicated to ‘the dead/ who are bravely living/ (and to those who wake wild-eyed in the dark)‘, a salute to people who suffer the acute distress of mental illness. Stavanger draws on his personal and professional experience as a psychologist to explore, communicate and transcend disjunctive states. He begins with a list of definitions for the word ‘special’, including the Latin ‘individual, particular’, the colloquial for sale-item, the euphemism for disability, and his own invention, the verb ‘to special’ meaning to observe patients on suicide-watch. The implication is clear: people with mental health issues are marginalised, ignored and discarded.

The Special is divided into six sections, Axis I to V, and an Appendix. Each section deals with an aspect of loss or disassociation, and generally contains a mix of verse and shorthand, staccato prose pieces.

‘Optimism’, the first poem of Axis I, quotes Oscar Wilde: ‘The basis of optimism is sheer terror.’ In other words, optimism is hope beyond reason, a step into fear. The tone of ‘when the plane crashes into the sea/ the sea is the least of your worries// the pilot announces/ I have nothing in front of me’ may appear cynical, but is actually a wide-eyed statement of fact, the utterance of which we usually keep to ourselves.

The title poem ‘the Special’ begins with a quote from Albert Camus’s The Myth of Sisyphus – ‘What is called a reason for living is also an excellent reason for dying’ – and charts a prosaic journey through fitful nights. The writing does not mimic the repetitions of Sisyphus’s pointless task, but implies that nights like this are endlessly repetitive. The existentialist notion of living despite the absurdity of life is encapsulated in the character of the out-patient who grates soap into a cup instead of grinding coffee.

Embracing the absurd is as feasible a survival technique as any other, and often more effective than the Freudian ‘talking cure’. The self-revelation encouraged by psychotherapists can potentially lead to self-disintegration, as the narrator of ‘the moth’s song’ well knows. His questions remain unasked because the therapist has no answers, but he does leave bits of himself behind: ‘chafed lips, baby teeth, the bruise of hind sight’. Like a jolly Frankenstein, the therapist will reconstruct a better person from the bits, at least that is usually the aim: ‘soon she will have enough flesh/ to form her own opinion’.

Stavanger expands on themes of dismemberment and devouring identity in ‘in-laws’. He subverts the clichés of the zombie genre to describe the imminent arrival of the dreaded parents: ‘you got up and your arm fell to the floor/ I knew the signal well ready to be eaten/ flies buzzing as I pulled off your red dress’. By the sixth act of ‘sleep, hit me (Frank’s song)’, anatomy has become murderous:

‘Pessimism’ is a counterpoint to the earlier, ironic ‘optimism’. This is the real thing: not toying with notions of dying but truly anticipating death, a step over the edge. ‘Survey’, a darkly humorous version of ludicrous questionnaires and personality tests, tells the reader what it means to be human, even to the point of disappearing. The multiple choice options to the fifteen questions are not weighted in favour of any particular sense of normalcy:

‘In the palace of broken men’ describes what I term social arrhythmia, and reminds me of Alberto Giacometti’s The Palace at 4 a.m. (1932), a skeletal structure, where the memories that cause night terrors reside. The ‘palace’ smells of neglect and decay, and provides shelter only for the dispossessed. It emerges later in ‘the inheritance triptych’, Stavanger’s most successful prose piece, that the broken man might be the author’s father, or himself, both ghosts wondering where to hide.

Needless to say, ‘the future’ is not optimistic – the author’s son ‘wants to live next door to the dying place/ so he can be there when the sadness happens’ – and yet people do connect with each other, and find respite. The author may not be optimistic but he is prepared to keep going. The last poem, ‘sky whale’, gives us a surprisingly apt farewell line: ‘I wake up living’.

It is difficult not to be seduced by the dark themes running through The Special. Not all the poems are equally startling, but they are easily accessible. There is no obfuscation. Except for a few surreal images there are no elliptic allusions. Perhaps The Special is too transparent. Some of Stavanger’s poetry seems soft and sparing of the reader’s feelings. Despair is leavened by humour. Some of the sentiments expressed seem prosaic, the juxtapositions obvious. But others rise above the mediocre and slam right into the solar plexus. These are the pages that will make you gasp.

This entry was posted in BOOK REVIEWS and tagged David Stavanger, Francesca Sasnaitis. Bookmark the permalink.
Francesca Sasnaitis is a writer and artist. Originally from Melbourne, she now lives in Perth where she is a doctoral candidate in Creative Writing at the University of Western Australia. Her poetry, short fiction and reviews have been published online and in various print journals and anthologies.