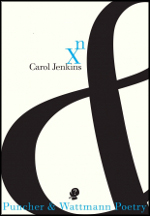 Xn has been described as a ‘mathematical metaphor for poetry’ and Carol Jenkins as a science-poet, but these are misleading claims. Jenkins’s vocabulary may derive from the sciences, but her themes are firmly grounded in the domestic. From the cosmic to the most mundane, nothing is beneath her scrutiny:

In her second collection, even the overtly science themed poems – ‘Einstein’s Overcoat’, ‘Co-evolution’, ‘Sky Given’ and ‘Evolution by Engulfment’ – serve to remind us that the results of scientific experiment and invention, though integral to our daily existence, have been absorbed ‘like English engulfing foreign words.’ By re-introducing specialist language to quotidian enquiry, Jenkins expands the poetic vocabulary with which she is able to illuminate previously neglected concepts. Unfamiliar phonemes and unusual rhythms exercise the reader’s imagination and provoke speculation: ‘we too shape shift by phagocytosis/ imbibing and embedding/ a welterweight of virus […] Why, then I ponder, when plants/ got chloroplasts, did we stop/ at mitochondria?’ I indulge the idea that partial comprehension leads to unexpected reverberations: I am reminded of childhood museum visits, and old-fashioned natural history displays with Latin names inscribed on yellowed cards; a time when everything, from the microscopic and to the astronomic, excited my curiosity, before my attention was diverted by the myriad demands of adulthood. My point is that rolling these unfamiliar words around on the tongue for the way they sound and taste offsets the minor inconvenience of opening a dictionary app.

Spring might pass unnoticed without Jenkins’s fresh observations of ‘[t]ree petticoats, false lingerie, winged flotsam.’ We might otherwise miss the ‘glory, gobsmack, gregal, descending grace-note’ of falling blossom. Jenkins’s giddy alliteration sends us tripping and billowing in imitation of spring breezes, and spinning with delight at her unexpected finale: ‘play petal mist for me’ conjures the Clint Eastwood film Play Misty for Me, and its ironic theme song of hopeless enthrallment. Jenkins’s oblique reference to popular culture provokes a chuckle of recognition, but also a twinge of uncertainly. The paean to the ‘Perianthetical Apple, Cherry, Plum’ has darker undertones than expected: ‘disperse, deceive, stay on, lie down;/ maybe your fall perturbs me?’

In the world of algebra, geometry and statistics, all is not light and joy. Jenkins deploys mathematical metaphors in poems like ‘Exit Speed’, Set Pieces’ and ‘Unit of Measurement’ to represent disintegrating relationships, damage and survival, and sets up dichotomies to expose the subtle differences between expectation and reality. ‘Zero –vs– Nothing’ attempts to balance the positive and negative aspects of the man in the equation. Zero is space, or the spaciousness before the man enters the picture. Nothing is the void remaining after he has left, ‘a cold space that nothing can illuminate’. ‘Climate is what you expect; weather is what you get’ charts the challenges and changing meteorology of a marriage: he knows only sunshine; she has raincoat years; arguments are ‘a squall of words.’ By the time we arrive at ‘orographic ascent’ it is impossible to decide whether ‘[a] marriage is what you expect,/ a husband is what you get’ is a lament or a relief.

No matter how carefully the poet unravels the tangle of knots in ‘Skeined’, ‘[i]t’s gridlocked, a dreadlock of entwined falling in,/ around & over.’ ‘The nub of disarray’ at the heart of the relationship remains. In the vignettes collected under the headings ‘Conversations in My Bedroom’, ‘A History of Toast’, ‘Museum of Butter’ and ‘Egg Opus’ Jenkins addresses anthropomorphic objects in another form of unravelling: an attempt to understand the complexities of people and existence:

In ‘Surrender comes with twenty different speeds’ the poet acknowledges that winning an argument ‘is merely another form of losing.’ Concessions have to be made and compromises arrived at. Some relationships survive the demands of domesticity; others do not. In hindsight, we are left wondering if reality was not so bad.

Jenkins constructs a narrative of emotional evolution with poems rich in puns and wordplay. From the excitement of beginnings, through travails and disappointments to reassessment, reinvention and finally resignation, she gives us many choices but only one last chance: ‘No Learners—the graveyard gate says./ This must be true, there is no learning/ to be dead.’ From her vantage above the clouds, the poet looks down through the ruddy stain of sunset to the earth below, and sums up Xn:

This entry was posted in BOOK REVIEWS and tagged Carol Jenkins, Francesca Sasnaitis. Bookmark the permalink.
Francesca Sasnaitis is a writer and artist. Originally from Melbourne, she now lives in Perth where she is a doctoral candidate in Creative Writing at the University of Western Australia. Her poetry, short fiction and reviews have been published online and in various print journals and anthologies.