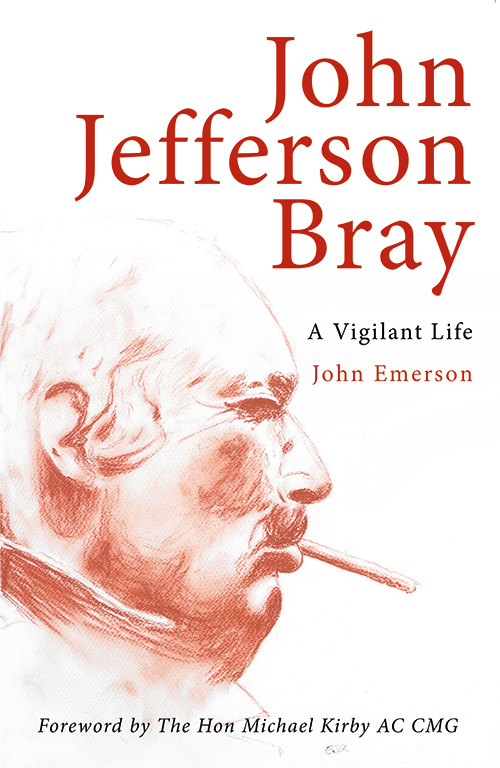 Former High Court Justice Michael Kirby writes this book’s forward. In it, he praises Bray’s unorthodox brilliance and judicial logic. The Law Lords of the Privy Council relied upon them.

DPP v Lynch is about whether a man forced at gun point to drive IRA killers to murder a police man could rely upon the defence of duress. Lord Morris approves Chief Justice Bray’s dissenting judgment in a South Australian murder case: ‘In a closely reasoned judgment the persuasive power of which appeals to me he held that it was wrong to say that no type of duress can ever afford a defence to any type of complicity in murder…’

Bray was a non-conformist child of the Adelaide establishment. He wanted to study arts. His family pushed him into law. As a leader of the Adelaide Bar he appeared in all sorts of cases about wills, divorces, defamation, insurance claims, and murders. In 1958 he relied upon the defence of excessive self-defence to reduce a murder to manslaughter. Crown Solicitor Joe Chamberlain publicly expressed outrage but Bray won all the way to the High Court. Emerson believes Chamberlain was then Bray’s enemy for life.

When in 1960 Murdoch’s Adelaide News was charged with seditious libel in relation to stories on the Royal Commission into the murder conviction of the Aboriginal man, Max Stuart, Bray acted for the editor, Rohan Rivett. The jury acquitted Rivett of eight out of nine charges. They were unable to agree on the other charge. It was later dropped. The ramifications for Bray were that police put him under Special Branch surveillance for years. Police reports would later be used to try and destroy his reputation.

In April 1962, A D Hope reviewed Bray’s first collection of poetry for the Australian Book Review. Hope unfairly writes ‘it is very plainly the sort of poetry that falls into the hobby class … no poem … has the quite professional touch throughout.’

But Bray’s version of Sappho is as fine as any:

He has an epigrammatic wit: From ‘A Diatribe Against Diminutives’:

And from ‘Initiation Nineteen Thirties Style’:

While a friend of Max Harris, Bray was no ‘Angry Penguin’. He was a classicist and anti-modernist who, when he read The Waste Land, was scandalised by what seemed to me to be outrageous violations of the laws of prosody. He also wrote plays in blank verse. Papinian featured the Roman lawyer who faced death rather than legally justify the assassination by Emperor Caracalla of his brother and rival, Geta.

In 1964 Bray achieved his greatest triumph as an advocate when Giovanni Carbone was acquitted of murder and manslaughter because of self-defence. Carbone had stabbed one of a group of drunks who confronted and punched him in Rundle Street. Bray exposed the racial prejudice of the Adelaide police to an Anglo Saxon jury.

In 1967 Premier Don Dunstan wanted to appoint Bray as Chief Justice of South Australia. The Police Commissioner gave the Cabinet an adverse briefing on Bray’s ‘undesirable associates’. Joe Chamberlain, by then a Supreme Court Justice seeking the appointment himself, apparently urged the Police Commissioner to do this.

The allegations were that years ago police saw Bray in a car with a man, that on another occasion police saw him and another man behind a hedge near Bray’s house, that the vice squad attended a flat owned by Bray’s family when Bray was not present and observed gays and transvestites, and that Bray was to be seen drinking in city hotels most evenings with ‘his types’.

The Attorney-General informed Bray of the allegations. Bray set down a detailed response saying:

I can only conclude from this lamentable episode that either the police keep a dossier on everyone, or everyone of any degree of prominence, or else I have been singled out for special attention. As the charges seem to centre around a period during which I was professionally engaged in litigation which was likely to be displeasing to the government of the day I am inclined to prefer the latter supposition. If that is correct it can hardly be thought that the police would have had me watched and my activities noted on their own initiative. Equally I find it almost impossible to believe that the Commissioner of Police would have approached the Chief Secretary spontaneously … I have decided however to pursue the matter no further unless and until subsequent events should make it necessary to do so. I have thought it wise however to record the matter because of the fallibility of human memory and in order that it should, if I still think fit, be preserved for history after the present generation is dead as a reminder of the brazenness, the meanness and malignancy of men and that the price of liberty is eternal vigilance …

Dunstan persisted with Bray’s appointment. When in accordance with tradition, the previous Chief Justice nominated Bray for the Adelaide Club, Bray was black-balled.

He refused an Attorney-General’s application for an injunction to restrain the performance of Oh Calcutta in Adelaide after a Melbourne Judge had granted one. He upheld an appeal against a conviction for failing to cease to loiter by a woman demonstrating against the war in Vietnam. He allowed an appeal by a man convicted of sending grossly offensive words, namely fuck and cunt, in a letter to a magistrate about divorce law reform. Some 67 of his 600 judgments are still cited with approval today.

After he retired, Bray published a book about the 3rd century AD Roman Emperor Gallienus. He had been working on it for most of his life. Early historians disparage Gallienus, who spent his reign fighting to defend the empire from external threats. Gallienus was a reformer who forbade senators from military command, thus promoting meritocratic leadership. He stopped the persecution of Christians. However, the elite regarded him as a fop. On the tenth anniversary of his reign, Gallienus had 1200 gladiators parade in golden dresses. He had coins minted depicting him wearing the headdress of the Goddess Demeter with his name expressed in the feminine as Gallienae Augustae. Bray comments:

Once again he displayed in public, attitudes and tastes which it would have been wiser to suppress altogether, or, if that was impossible, to reserve for private manifestation. Once again the self-expression of the human being tarnishes the image of the ruler.

Of the poetry of Gallienus, only one verse remains, celebrating the wedding of his nephew. Bray translates:

This is a fine book about a fine man.

This entry was posted in BOOK REVIEWS and tagged Campbell Thomson, John Bray, John Emerson, Michael Kirby. Bookmark the permalink.
Campbell Thomson is a Melbourne writer, artist, and barrister. He acted for the Wimmera mob in their successful native title claim. He acted for five of the 'Gunns 20' environmental activists, sued by the Tasmanian timber company. He prosecutes and defends alleged murderers. In 2009 he produced & performed in Othello at 45downstairs. He is a judicial officer for Super 15 Rugby, helps coach the Melbourne Uni Colts, & plays touch rugby in Edinburgh Gardens with other has beens.