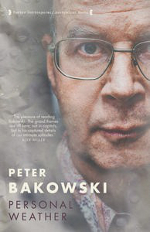 Bakowski looks into the lens in the photograph by Nick Walton-Healey on the cover of Personal Weather. The poems are also direct. They eschew simile, ambiguity, and the abstract. Were he an etcher, Bakowski’s work would be figurative with clear outlines and orderly perspective. There is no hesitation in his lines. His skies might be cloudy but there would be no obscuring storms of angst, only fugitive rays spotlighting the quirky in the mundane.

The preface to his 1995 prize winning book, In the Human Night, states that he was ‘Born with a hole in the heart to Polish-German parents in Melbourne on 15 October 1954 … On 21 January 1993 he survived an eight hour heart operation.‘

In this volume birds fluttered through the verses with unabashed lyrical abandon. Natural imagery abounded:

This is Bakowski’s credo. The poems presented as found objects the poet picks up on his daily walk:

In Bakowski’s last collection, Beneath our Armour (Hunter 2009) he says ‘My aim as a poet is to write clear and accessible poems, to use ordinary words to say extraordinary things. No matter how many books I write in my life time they will all be about what it’s like to be a human being.’

The poems displayed international ambition. There were vignettes of writers such as ‘Portrait of Cyril Connolly’ and in another he had Sylvia Plath writing about Ted’s new lover.

Not all these life studies entranced but they reflect a working method:

There are five portraits of other writers, including Plath. Maybe there should be a century embargo on Plath poems. There is ‘A Melbourne letter poem to Ken Bolton’ and ‘A letter from Rebecca Cartello in Scarborough, England, to her sister Carla in Longreach, Queensland, 15 December 1955’. There are four poems about letters, including:

There is a sextet of epigrams, including:

There is a foreword by Barry Humphries, set out like blank verse. It could be taking the mickey. It reads, in part:

A Spanish proverb prefaces the poems: ‘Tomorrow is often the busiest day of the week.’ A man with a serious heart condition may have a special relationship with tomorrow.

The poems in Personal Weather look similar: left justified, un-rhyming views through a 50mm normal lens with straightforward syntax. They have no interest in their own concreteness. They aim to mean. They aim beyond the delectation of other poets.

The book’s first poem is ‘City workers during morning rush hour, Collins Street’, alludes to John Brack’s painting of 5pm in the same street. The second stanza is:

This has the yearning of Whitman without his music. It relies on lists and the close observation of a Cartier-Bresson.

Bakowski blogs poems and musings on poetry and his influences. He pays homage online in ‘One for Charles Bukowski’:

Online he discusses pruning and sifting his poetry: ‘I’ve realized in my twenty years of writing poetry I’ve now used the words ‘sparrow’ and ‘sofa’ enough.’

He talks about being inspired by crime fiction and biography. He describes writing poetry as ‘ambling with your thoughts on a long leash in the park of your skull.’

Do the words he finds in this park excite? His corner of the playground may not entice all players but there is a whittled, sly serenity in his best lines. From the book’s last poem, ‘Some observations and a wish, for Ron Padgett’ come:

One hundred years of games in literature do not trouble this work but there should be some quiet in our hubbub for Bakowski to be heard.

This entry was posted in BOOK REVIEWS and tagged Campbell Thomson, Peter Bakowski. Bookmark the permalink.
Campbell Thomson is a Melbourne writer, artist, and barrister. He acted for the Wimmera mob in their successful native title claim. He acted for five of the 'Gunns 20' environmental activists, sued by the Tasmanian timber company. He prosecutes and defends alleged murderers. In 2009 he produced & performed in Othello at 45downstairs. He is a judicial officer for Super 15 Rugby, helps coach the Melbourne Uni Colts, & plays touch rugby in Edinburgh Gardens with other has beens.