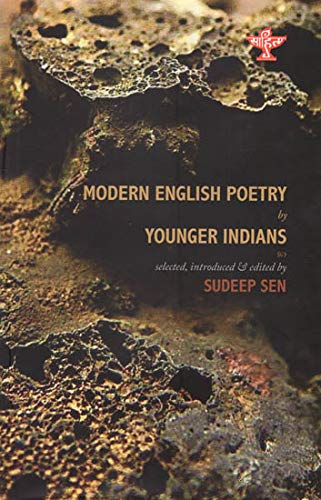 
Postcolonial poetry has always lagged behind postcolonial fiction on the world market. Yet in most cases, this is attributable to poetry generally lagging behind fiction in sales and publicity. In Australia, for instance, the profiles of Tim Winton and of John Kinsella, internationally known Australian writers of comparable achievement, are about what one would expect given the different profiles of the genres they are best known for writing in.

The disparity between Indian and Indian-diaspora fiction and poetry, though, seems even greater. Every even barely conversant reader can reel off ten or so prominent novelists of Indian background that are part of the world literary conversation on its most basic level, but few could come up with any Indian poet. And those that would be mentioned—Nissim Ezekiel, Meena Alexander, Dom Moraes, A. K. Ramanujan—are no longer on the scene.

Sen’s anthology is an adept guide to an emerging body of work not as known, in a literary world that thinks itself multicultural and cosmopolitan, as it should be. It does not favor or prescribe one sort of poem or one poetic modality. There are some formal poems (sonnets, ghazals, rhymed quatrains) but also many free-verse poems bound together by imagery and insight, and a generous amount of prose poems, which comprise some of the most stimulating aspects of the book. The formal aspect is well-represented by Uttaran Das Gupta’s “Iron In The Rain”:

This poem bears effective witness to environmental damage, delves into the apparent consciousness of the nonhuman, and also is very urbane in its sense of panache and style. Just as the formal verse is vitally contemporary and does not smell of the lamp, so are the prose poems engaged with life and not stuck in the avant-garde miasma which so often afflicts the genre. Umit Singh Dhuga also is an absolute master of form:

Dhuga is arguably one of the best poets of his generation in English today, and certainly the one whose formal achievement seems the most effortless. Other poets shadow classic forms, as Hinali Singh Soin does in ending “Invisible Poetry”, her seventeen-line poem: “Sonnet like wandering and wondering. Sonnet like all fourteen lines. like one.” (192) Navkirat Soodhi’s micro-poems, though not rhymed, are so concise to be exquisite in form, as in “Act Three”:

Rohan Chhetri’s “Everything For Me Is Something Else” is both observational and surreal, sensitive to feeling but also holding back some level of awareness, or stretching at communicating something ineffable:

Rochelle Potkar’s “Transmogrified,” about the love between a he-snake who first loves a she-snake but then, as he changes species, has different encounters with lovers bound to the one species, was my favorite poem in the book. Its vision of interspecies samsara is both catchy and droll, and evocative of traditional Hindu metaphysics, Darwinian evolution, and the dangers of the Anthropocene all at once. The poem’s closing line, “Sometimes evolution and progress is so fast, blessings and curses are all mixed up, and One” (192) would be apophthegmatic inverse but as a prose poem it is pleasingly grave, arch, and dry at the same time.

Modal diversity is accompanied by diversity in tone. Though most of the poems stay in a high, ceremonial register, some, such as Nawaid Anjum’s “A Poem”, are refreshingly colloquial and conversational:

The conversational energy here is between the lines of the clichés, in the rapport and critical attention of the dialogue. The poets included here operate as much by the ear as the eye, and this is especially important in conveying to non-Indian readers the sound and the beat of contemporary poetry from the subcontinent. The Canada-based Priscilla Uppal, who sadly died of cancer in 2018, is engaging in her first-person honesty, as when she says, of her own body, “I am no/longer the love of your life” (251).

Pages: 1 2
This entry was posted in BOOK REVIEWS and tagged Nicholas Birns, Sudeep Sen. Bookmark the permalink.
Nicholas Birns teaches at the New School; his books include Understanding Anthony Powell (2004), Theory After Theory: An Intellectual History of Literary Theory Since 1950 (2010) and Barbarian Memory (2013).