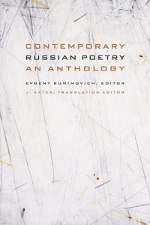 Dalkey Archive Press has long been known as a premier publisher of cutting-edge international fiction; here the Illinois-based firm continues its venture into poetry. This massive book, including forty-four poets, all with English translations facing their Russian originals, and supervised by both an ‘editor’ and a ‘translation editor’, is an anthology of Russian poetry written by living poets, or those born late enough to still be plausibly alive today. It is not, in other words, just inclusive of the latest generation, or those explicitly linked to postmodern or experimental practices; or those coming to prominence only after the dissolution of the Soviet Union in 1991. (That the volume is, at the date I write this, nearly six years into print – when Vladimir Putin was still in his first stint as President and before the war with Georgia had occurred, may explain some of these factors). Despite Dalkey’s reputation, a traditional lyricism reigns here as much as anything more fractured or fragmented. If anything, there is in the roster a slight bias against the experimental; neither the late Arkadii Dragomoshchenko nor some poets in their prime, such as Inna Kabysh, are included when they might likely be. Some very senior poets, such as Inna Lisnianskaia, are also omitted. Diaspora voices – poets living in, say, the US but still writing to some extent in Russian – such as Ilya Bernstein and Philip Nikolayev are also absent, although poets not ethnically Russian but writing in the language, or those culturally Russian but living in other ex-Soviet states than Russia itself, are included.

Moreover, the collection’s focus is as much thematic and topical as formal and experimental. This collection may go, in the words of Irina Ermakova, to ‘tradition’s border with the avant-garde’ (99) but certainly never strays across that border. Given that, for over a century, there has, from the time of Andrey Bely and the early Russian Formalists, been a non-representational, self-aware aspect to Russian writing, the materiality and approachability of this collection is striking, and the note of surrealism sounded, for example, by Yuri Gugolev and the jazzy informality of Alexei Tsvetkov atypical. The first poem included in the book, by Yuri Kublanovsky, speaks to issues of personal and national identity, ‘For a long time I’ve been a guest at home, not in foreign parts/as if I am waiting for a ferryboat besides the sparkling water.’ (3) The inversion of the exotic and the familiar in the poem, perhaps hearkening back to Formalist ideas of ostranenie, is nicely captured in the translation by Galina Datinko and Judith Hemschemayer,‘sparkling water’ of course referring in English to an indoor drink as well as an outdoor littoral. But the point is that, albeit playfully, national, referential themes are sounded, as also occurs when Maksim Amelin says, ‘I was chosen by calmer times’ (339) rather than those of Stalin or the Czars. Calmer, though, does not mean uneventful, and such recent trends as the reemergence – and political aggressiveness – of the long-persecuted Russian orthodox Church is seen in Marianne Geide’s poem on the betrothal of Saint Catherine of Alexandria, or editor Bunimovich’s statement that ‘it’s no longer awful knowing why they go on about God’ (159) or Vladimir Salimon’s crisp rendition of Edenic themes in ‘Jam From Paradise Apples’ or Yuri Arabov elevating prayers over money and women in ‘Aporia’. Some poems visibly reach back to the classics of Russian literature, as Sandzhar Yanyshev’s ‘A Soldier’s Death’ reminds one of the Tolstoy of ‘The Cossacks’ or ‘Hadji Murad’, or Salimon’s ‘Although The War of Frogs and Mice’, which begins on a Krylovian, beast-fable note, and ends with a Tolstoyan invocation of ‘war and peace’ (141), rendered in Russian the same way as the great novel’s title, voina e mir. Some, though, are very much one-of-a-kind performances where the unmediated poet’s voice reigns paramount, as in Dimitry Tonkonogov’s haiku-esque ‘Moving Into Winter’:

Nicholas Birns teaches at the New School; his books include Understanding Anthony Powell (2004), Theory After Theory: An Intellectual History of Literary Theory Since 1950 (2010) and Barbarian Memory (2013).

View all posts by Nicholas Birns on Cordite →