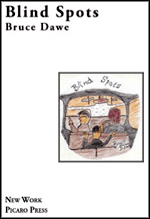 Some poets are sublime and ridiculous at the same time. James Kenneth Stephen was only being felicitously expressive of what oft was thought of Wordsworth when he wrote:

And, Bruce Dawe, both are thine. Of course, Dawe has nothing like the thunder of Wordsworth, but he is not without his depths, his music, his murmured convictions, colloquial but eloquent, his flashes of lyrical daring, his capacity to thrill and charm and surprise. When he is considered and concentrated, when he does not dissipate himself in imitating a world of banalities, or trying to capture a folksy, fatuous speech, then indeed there is the ‘form and pressure of high thoughts’, and his zeal for ‘ordinariness’ yields to an elevating metaphysics, the transcendent mundane, unpretentious and articulated with deceptive simplicity. Here is the last stanza from his much admired ‘The Rock-Throwers’:

It’s those pedal points – ‘glazier’s benefactor’, ‘everlasting evangel’ – those self-conscious pauses for just the right – the different – phrase, the sudden moonbeam, the revelation, that give this brief poem breath enough, or drama enough, to rise to its epiphany. This is Dawe’s voice from the deep. And it is this inwardness that gives purpose and coherence to its meandering prelude, with its evocation of the subdivided world, full of train tickets, cut lunches and footprints on the lawn. Such renderings of the real are always precisely done, but they have an automatic quality – Dawe as a random object generator – which gives cover to the creeping sentimentalism to which his poetry is always on the verge of succumbing.

It is when he is most self-conscious, most introspective, that Dawe is actually at his best, and his poetry at its most striking:

That is from ‘Interviewing the Poet’, and in it the poet interviews himself: it is an inward view, a suspended moment in the gloom of his interiority, in the latent shadow of his need for expression and his sense of its difficulty, and the necessity to ride in a language, alien but meaningful, which has mystery and falls on us with the impact of stones on a tin roof, hurled from who knows where.

And then there is that other voice, the voice of everyday life and all its clichés of manners, its extraverted sentiment, the voice which demands identification at the expense of meaningful communication, a voice that makes authenticity its only point. This is the voice that relaxes into competency, the one with the easy gift for capturing the commonplace thing or thought in a commonplace way, rehearsing and embellishing the opinions and habits, ambitions and weaknesses, of ordinary middle-class Australians. This is the Bruce Dawe who contentedly denotes his place and time, whose books are albums filled with snapshots of suburban streets and characters and rituals, a world of cornflakes and commuters, football and failed marriage, each one ‘a graceful monument to the obvious’, as Orwell would have it.

And this is the voice, more often than not, that we find in his satires. The lake is damp and war is bad, and so is Joh Bjelke-Petersen; but what’s to be done? Memento, homo, quia umor es, et in umorem reverteris. Remember: damp thou art and into damp shalt thou return. He is never more obvious, more pleased with common sense, more extrinsic and superficial, than when he is playing the gloomy, long-suffering Christian satirist, the ordinary bloke who pulls faces at the high and mighty.

These two latest volumes are both satires, both of them verse plays in some sort of pattering music-hall tradition, and both are damp to the point of being wet. The first, Blind Spots, describes the sudden rise and equally abrupt fall of Julia Gillard, while the second, Kevin Almighty, follows the 2013 federal election and Labor’s defeat at the hands of Tony Abbott’s Coalition. Both are rough lampoons of the Australian political system and both show Dawe at his most cursory and careless.

Andrew Fuhrmann is the current performing arts editor for Time Out Melbourne.

View all posts by Andrew Fuhrmann on Cordite →