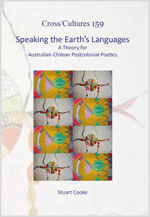 If poetry registers ‘internal difference, Where the Meanings, are’, in Emily Dickinson’s deep phrase, then indigenous poetry creates meanings that are more different still. Growing from an alternative poetics that questions conventional procedures and challenges what we know, indigenous poetry gives us a chance to change. That is true whoever or wherever we are, Indigenous, indigenous or invited in. It may be more broadly true, across other art forms too, but to start from poetry, if poetic language is speech at its most highly charged, then in indigenous poetry there’s a glimpse of a potential for overturning and renewal. Dominant practice has its own built-in obsolescence. Paradoxically, given its acknowledgement of the timelessly old and absent, indigenous poetry suggests a new way forward.

How that might happen is expounded by poet, translator and scholar Stuart Cooke in Speaking the Earth’s Languages: A Theory for Australian-Chilean Postcolonial Poetics. Both a befitting modesty and a huge ambition are indicated in that title. As we seek ways to speak – meaning to hear and understand as well as to give voice to – all the languages of the earth, especially the endangered and marginalized, are we also learning to speak, through an altered understanding of the ecology of utterance, the language of the earth itself?

The author begins from an image and an insight into the condition of being indigenous under colonisation: ‘a new set of expectations is placed over their world like a thin cotton sheet … everything is covered by its white topography’, wrapped, ‘as if the land and its occupants were the dormant forms of something not yet realized’. That ‘as if’ ‘is a fundamental epistemological error’ says anthropologist Deborah Bird Rose, quoted here by Cooke, referring to Aboriginal Australia. The same is true elsewhere, where one imaginary smothers another: ‘in the intricate evasions of as’, in Wallace Stevens’s phrase in ‘An Ordinary Evening in New Haven’. That ‘error’ is the basis on which, in the book’s boldest move, Aboriginal people are brought together with the Mapuche of southern Chile in an ‘inextricable proximity’ via their shared histories that yields ‘an emergent, trans-Pacific indigenous poetics’. The discussion is avowedly ‘circuitous’ and speculative, yet its parabolic arcs are illuminating, spiraling in and looping out wide.

The advent of imperial invasion is nothing ordinary, of course, but as strange as another image of a white sheet, the wrapping of Little Bay in Sydney in 1968-69 by conceptual artists Christo and Jean-Claude. Reflecting on the inadequacies of the exhibition Australia staged at London’s Royal Academy in 2013, art historian Ian MacLean cites that missing Wrapped coast as a transformative work for drawing ‘attention to what lies beneath the land rather than to its scape’. It resonates with what Aboriginal people call country, a conception developed in Australian writing in Reading the Country: Introduction to Nomadology (1984) by Kim Benterrak, Stephen Muecke and Paddy Roe, one of the guiding texts in Speaking the Earth’s Languages.

Cooke’s strategy is to focus on two Aboriginal poets, Paddy Roe and Lionel Fogarty, and two Mapuche poets, Lionel Lienlaf and Paolo Huirimilla, whose work represents different approaches to the blending of traditional language and cultural knowledge with their respective literary mainstreams of English and Spanish. He precedes these investigations with a re-reading of the most canonical of those mainstream poets, Judith Wright and Pablo Neruda, commonly heard as voices of support for the indigenous presence in their settler worlds, but here provocatively constructed as barriers that their successor indigenous poets must overcome.

The case against Wright is that her inherited literary approach prevents her from truly speaking from Australia. That includes the lyric tradition’s formal constraints of metre and rhyme, its expressive ‘I’, its language of universality and transcendence, even in the local and particular. This is less an argument with Wright’s beliefs or actions than with the ideology her verse manifests: ‘despite her best attempts, much of Wright’s poetry has perpetuated an Australian colonialist poetics’. Yet ‘it is precisely because of [Wright’s] importance and influence that we must direct our strongest critical attention towards her’. One can agree with this without going along with the author’s sometimes formulaic readings. Wright reads differently with more temporal context and a longer view of poetry, back beyond the imposition of imperial Englishness to the lyric as a vehicle for summoning up ancient, cyclical, bodily repetitions and relations. Wright changed her own poetics, moving to something more radically ecological in her late ghazals, for example:

Nicholas Jose writes fiction and essays. His publications include, as general editor, the Macquarie PEN Anthology of Australian Literature. He is Professor of English and Creative Writing at The University of Adelaide.

View all posts by Nicholas Jose on Cordite →