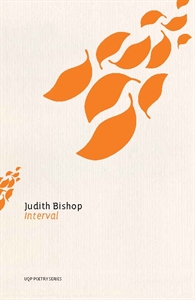 Interval is the fourth book for Judith Bishop and her first with University of Queensland Press. The book is divided into four sections. The first begins with an epigraph from the French philosopher Gaston Bachelard that ‘childhood is certainly greater than reality.’ It’s an apposite riff that informs the sentiment of the poems that follow it, in which speaker mothers talk to their children. These poems have a lyric modality, they feel intimate even confessional, while a tensioning quality of abstraction prevents slippage into pure nostalgia.

The first poem ‘Letter to My Daughters’ is organised around the refrain “bring me back to change the script’: a mother addresses her children about the failings of her parenting – (mild ones it must be said) such as restrictions on jumping in puddles, refusing the request for one last story – and asks ‘bring me back to change the script.’ ‘Give me time and I will stay with you / until our eyes have shut’, the speaker says, the irony of course being that time is so often the enemy of ideal parenting. Against the mildness of the complaint and the retroactive idealism of the improving parent, the shut eyes don’t just imply the bliss of mother and daughters falling asleep together, a kind of revelling in Blakean innocence, but also the threat and inevitability of mortality.

Reading the early poems in Interval, it is impossible to tell whether the swelling undertone of tragedy is due to the regrets of the parent, or potentially the loss of a child. Bishop’s lines resist such easy identification of event to emotion and are all the tauter because of it. When reading lyrical poetry, there is always the temptation to conflate the poet with speaker, a temptation whose satisfaction is deferred, not least by the speaker’s battle with time, which we also see in ‘Poem for a Little Girl’, elegantly comprised of six three-line strophes, the last three of which are (movingly) as follows:

There’s a powerful current of tragedy at work here, but it remains protean, despite the intimate clarity of the utterance. This creates an emotional shimmer that is consonant with flickering hopes of transcendence. The notion of tragedy is thematically supported by the following two poems which invoke Greek mythology, ‘The Blind Minotaur’ (via Picasso’s painting) and ‘Reading Myths the Greek’, a digest poem, playful, that finishes:

A brace of poems that reflect upon conception and birth are followed by ‘Snow,’ in which Bishop works cleverly through a series of riffed juxtapositions: cold and hot, snow and Icarus, death and life, black and white, word and life. It’s a movement away from the lyrical intimacy of the earlier poems towards a more intellectually abstracted universalising stance.

This abstraction persists in the following poem, ‘Openings’ which is a powerful meditation on emerging into the world, running out of a Roethke epigraph, ‘I could say hello to things.’
Here Bishop confronts the mortifying thought that the price of entry into life is death:

The superb poise Bishop shows in her balancing of affect and abstraction, and the creation of an incantatory container for these sentiments that is organised around the repetition of ‘open’ is one of the highlights of the book. Primed by the mythology of the preceding poems, it’s almost as if Bishop is exploring birth and motherhood by the positing of an alternative Pandora: the box must be opened, even if there are terrible consequences because the only other option is not to live at all. This is in the second section of this 5-sectioned poem, and in following the poem, it becomes clear in section IV, a vignette of a young neighbour’s suicide how precarious this situation is.

The second section of the book begins with an epigraph from Dickens; ‘we had everything before us, we had nothing before us’. In this shorter section Bishop experiments with form such as in the prose poem ‘Fairytale’. It’s a less intimate and ultimately less powerful section. ‘Best of Times’ for instance starts powerfully in the present before veering into ekphrasis that dilutes the force of the poem’s opening statement, ‘Too much beauty is disturbing.’ The strongest poem here is ‘Miniatures’, four pithy yet elegant quatrains such as

These are beautiful lines that shape the space of meaning without filling it in. Bishop’s great strength in Interval is as an explorer of uncharted interiorities where emotion and intellect entwine. The final two poems of this section ‘Rising Tides’ and ‘The New Maps Keep a Weather Eye,’ veer towards the eco-poetic by way of the cartographical and lack the same urgency even as they evince it.

Ecological perspectives continue into the third section. ‘The View From 10,000 metres’ plays with the estrangement of looking at the earth from a plane, while ‘Tunings’ juxtaposes the idea of a wind-driven leaf with the advent of self-driving cars. Meanwhile ‘The Ambun Stone’ is an intriguing if overly anthropomorphic address to a fossilised echidna foetus. The poems here feel lack the same collective impetus as section one. They feel more like clustered occasionals. They all have their merits, but they do detract somewhat from the consonance of the collection, evidence of the difficult balance of how to organise disparate poetic intentions in the one volume. Indeed the title Interval itself suggests a book perhaps composed from different times and mindsets.

Section IV returns to some of the collection’s earlier strengths. It’s highlights include ‘The Wild Has No Words,’ a musing on our inescapable animality, how wildness sings its songs in us, and drives us to action despite this lack of words. Again, Bishop confronts mortality, the poem finishing with:

There is more to say and much to admire in this strong collection whose intellectual integrity is marked by the way its thoughts are constantly butting up against the unknowable. This primary sense of accomplishment, however, might have been further enhanced if there had been a greater correspondence or a clearer logic of division between the volume’s sections.

This entry was posted in BOOK REVIEWS and tagged Ed Wright, Judith Bishop. Bookmark the permalink.
Ed Wright is a poet, writer, critic and teacher. He has published six books of popular history, one full volume of poetry and an award-winning novella. He also writes the New Australian Fiction column for The Australian newspaper. He has taught writing at universities in Asia and Australia, is a Conjoint Lecturer in Creative Writing at the University of Newcastle and Director of The Creative Word Shop, Newcastle’s first dedicated Creative Writing School.