Review Short: Geraldine Burrowes’s pick up half under 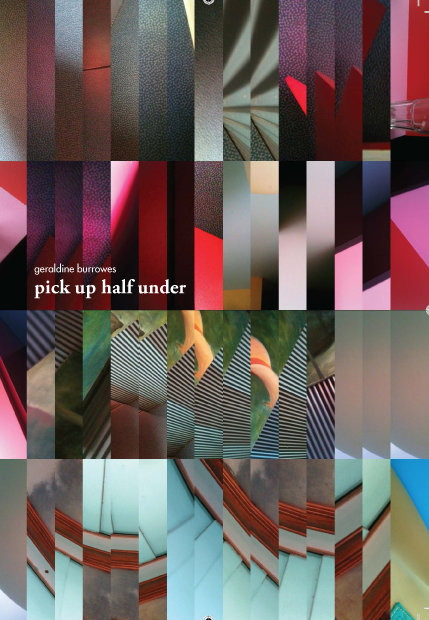 pick up half under by Geraldine Burrowes
Rabbit Poets, 2015

Geraldine Burrowes has come to the practise of poetry via a long and varied career in the visual arts that concentrated in its later years on 3D forms. Pick up half under is her first full volume of poetry. It’s an interesting collection, imbued with the peculiarity of the late starter. There’s a sense of the techniques of poetry school being applied, but in the best poems the abstract play of images is framed by life experience to create poignant and original work.

Burrowes’s diction is fairly elevated, and wears the desire to be seen as poetic. Her modus operandi is primarily abstract, something not uncommon for poets with form in the visual arts. There’s a sense perhaps of the experimental as orthodoxy, but that might just be because, as a late starter, Burrowes is in the process of finding her own voice. Certainly the influence of poets like Michael Farrell loom large, and it is tempting to wonder whether works such as pick up half under are evidentiary of the existence of an informal Melbourne poetic school. There are differences too, however: Burrowes writes with an earnestness that Farrell does not. There is less cultural referencing, more personal reflection and observation.

The imagery is often clever, and imparts a sense of having been wrought, generated more from a battle with self than the play of the mind. Take the opening lines of ‘falling apart in my own hands’:

It’s a lovely opening, ‘morning’ is juxtaposed with ‘swill’, with its idea of liquid excess, of alcohol swilling (not usually a morning activity), but also widening in the potential of its suggestions to feeding pigs, perhaps as a far as Paul Keating’s ‘unrepresentative swill’. The line ‘inside tight shell’, speaks to the containment of excess, willed or unwilled. The shell as husk implies that the liquid swills inside an emptied space. It’s the big theme of the collection, the idea of loss, in particular the loss of a long-term partner and the challenges this places for the reinvention of the self. The possibility of an externally imposed exoskeleton, then moves to the idea of growing a new spine. This is neat, but it also marks the point where the sequence begins to drift, shedding tension and originality. This happens in the next line ‘bound in wallaby leather’ where the spine of the swill speaker becomes the spine of a book. The wallaby leather feels decadent (think high-end gift shop) while bibliocentrism drives the poem further towards scribbling in the margins and something of the dance of disparate ideas is lost as the poem edges towards conventional associations.

This unevenness is found quite often in the volume and it has to be remembered that this is a debut. The stand-out poem in the collection is the long-poem ‘a vacancy’ that speaks of being left behind at the end of a long relationship, of an emptiness that must advertise its need for new occupation.

Although this reviewer is mostly oblivious to games of space on page, in this case it really works. The absence in the middle manufactures absence and it shifts shapes through the strophes as if the lines are some kind of broken Rorschach measure of grief. The opening lines are beautiful, of the mind getting lost in morning fog, the pair of parrots disappearing. Reading down on the left, juxtaposes the morning tranquillity with violence against a baby quilt pattern, an activity in itself representative of settled domesticity. On the right, the absent partner is pictured at the sink, then the bench, the daily kitchen rituals, the thanks for tea – while it’s easy to pour the tea the lost voice of the thanks is particularly poignant. As the strophe reaches its end, there’s a sense of unravelling, the friend warns not to go there, but it’s the kind of warning that can’t be listened too, and the world is turned upside down, shovel by shovel, tunnel filling the sky; escape goes down the rabbit hole.

This is a poem that sustains itself over six pages and the price of entry is worth it for this alone. While pick up half under is sometimes a little too mannered in its experiments, and uneven in part, it is nonetheless a debut collection with shimmering highs that speak inventively to the frail threads of the human condition.

This entry was posted in BOOK REVIEWS and tagged Ed Wright, Geraldine Burrowes. Bookmark the permalink.
Ed Wright is a poet, writer, critic and teacher. He has published six books of popular history, one full volume of poetry and an award-winning novella. He also writes the New Australian Fiction column for The Australian newspaper. He has taught writing at universities in Asia and Australia, is a Conjoint Lecturer in Creative Writing at the University of Newcastle and Director of The Creative Word Shop, Newcastle’s first dedicated Creative Writing School.