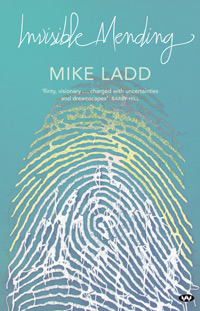 Adelaide poet, Mike Ladd, is best known for his long-running Poetica program on the ABC’s Radio National (eighteen years all up before its casual destruction in 2014). The breadth of taste and openness to a wide range of influences Ladd displayed in Poetica is also to be found in Invisible Mending, his first poetry collection since Transit in 2007.

It needs to be pointed out, however, that Invisible Mending is not so much a collection as a miscellany. Barry Hill in his introduction calls it an ‘accelerated mix of poetry and prose’ and he is not far wrong. The book does have a forward momentum as prose (fiction, essay and memoir) is loosely alternated with poetry. It’s the sort of book that publishers are normally reluctant to accept. Poetry collections, they think, are hard enough — as are short story collections — but combinations of the two (with some essays thrown in) are normally unthinkable. Wakefield Press, an enterprising publisher specialising in South Australian writing, has made the right decision, however, in not advising Ladd to go away and come back in a year or three with two separate books.

All the work Invisible Mending is unified both by Ladd’s aesthetic curiosity and his political temperament. The poems are quick to pick up anomalies or hypocrisies. A good example is the early poem, ‘Learn to Speak the Language,’ where the narrator hears a fellow bus passenger criticising two Punjabi women for not learning ‘the language’ of their adopted country. ‘ “Yeah. You’re right,” I said. / “So how’s your Kaurna? / And how good are ya / at Pitjantjatjarra? / Fancy a chat in Ngarkat?”’ That’s just the beginning of a thorough and humorous put-down.

A more visceral politics can be felt in poems such as ‘Gasoline Flowers’ and ‘The Museum of Memory, Santiago de Chile.’ These are full-blooded but subtle protests in the tradition of Brecht and Neruda rather than the slyly-winking postpostmodern critiques we have suffered in recent decades. In the short but horrific stanzas of ‘Gasoline Flowers’ Ladd compares four widely separated political self-immolations to a variety of flowers, culminating in ‘For his land of snow / and a spinnng prayer, / Tsering Tashi was a gaping petro hibuscus.’

‘The Museum of Memory, Santiago de Chile’ works in a comparable way with details of torture under Pinochet’s regime intercut with details of the generation of the electricity used by the torturers. It finishes with ‘the snow melts / the river hurries / the bed is wired.’

Fortunately, and cleverly, the poetry is not all politics. There are several nicely ambivalent poems about Ladd’s home town, Adelaide, and a couple of disturbing ones about his father’s descent into dementia. The second of these, ‘My Father at the Clothesline,’ shows an inventive way with syntax and is short enough to quote in full: ‘Concentrating on each peg, mouth open, / aghast at the rate the world is leaving him. / His dignity, as he folds his clothes.’ It’s a sort of long-lined haiku which obliquely and effectively makes its point.

A rather different style can be seen in Ladd’s pantun sequence, ‘A Book of Hours at Rimbun Dahan’ which follows an informative essay on this ancient Malay form. The interlocking stanzas of the pantoum, as we know it in the west, is just one of its varieties. Ladd uses a quatrain form with its abab rhyme scheme with a two-line pembayang from the outside world to start with and a closing two-line maksud to make a related ‘interior’ point. His scattered use of half-rhyme here can seem less persuasive than the full rhyme he quotes in his Malay examples but the pantuns do make their (often playful) point. The last one is probably the best (though perhaps a bit boyish): ‘From the estate’s wall, grey macaques leap / into the laden mango tree. / From your side of the bed, you told me to sleep, / but the night’s so warm, and I want something juicy.’

No less memorable are short stories such as ‘A Neighbour’s Photo,’ ‘Ken,’ ‘Traffik,’ ‘Breakfast in Valparaiso,’ ‘Back Again’ and ‘A Country Wedding.’ The last three are, admittedly, closer to memoir or travelogue than fiction but are no less compelling for that. ‘Traffik,’ at 22 pages, is the most ambitious work in the collection and is a forceful revelation of the more dubious dimensions of the Asian ‘economic miracle.’ If you want to know more about the miserable fate of the orang-utans in Borneo, then ‘Traffik’ is a good place to start. Strangely, Ladd breaks the ‘rules’ of fiction writing by making the characters stereotypes with capital letter titles (‘the Student,’ ‘the Middleman’ and so on) but the story also has a persuasive surreal edge, reminiscent of Peter Carey’s early stories.

In a rather different style to ‘Traffik’ and reminiscent of social realists such as Alan Marshall, are stories such as ‘Ken.’ This story in particular is made from cleverly arranged details with little or no authorial intervention. It certainly involves ‘comment’ but not of the kind that does damage to the particularity of the character portrayed. Its opening sentence establishes both the tone and the method to be used: ‘I hear Ken more often than I see him: the crackle and clatter as he flattens aluminium cans and throws them into a wool-bale cover, the clinking as he sorts empty stubbies and longnecks, sometimes late at night.’

The essays, such as ‘Pantuns in the Orchard’ and ‘Gaudi and the Light,’ are both informative and somewhat personal (as the best essays can often be) but the impulse seems less intense than in the best of the poems and fiction. Stories such as ‘Ken’ and ‘Traffik,’ dissimilar though they are, will probably be what most readers take away from the book, along with poems such as the two fiercely political ones discussed above and lighter, almost humorous pieces such as ‘Radio News,’ ‘Adelaide’ and ‘Spring Café.’

Invisible Mending is undoubtedly a miscellany but it is one in which a reader can enjoy variety while still having a clear sense of the values and preoccupations which hold the whole collection together.