A Poet’s Progress in the ABC: Reflections on a Life in Radio 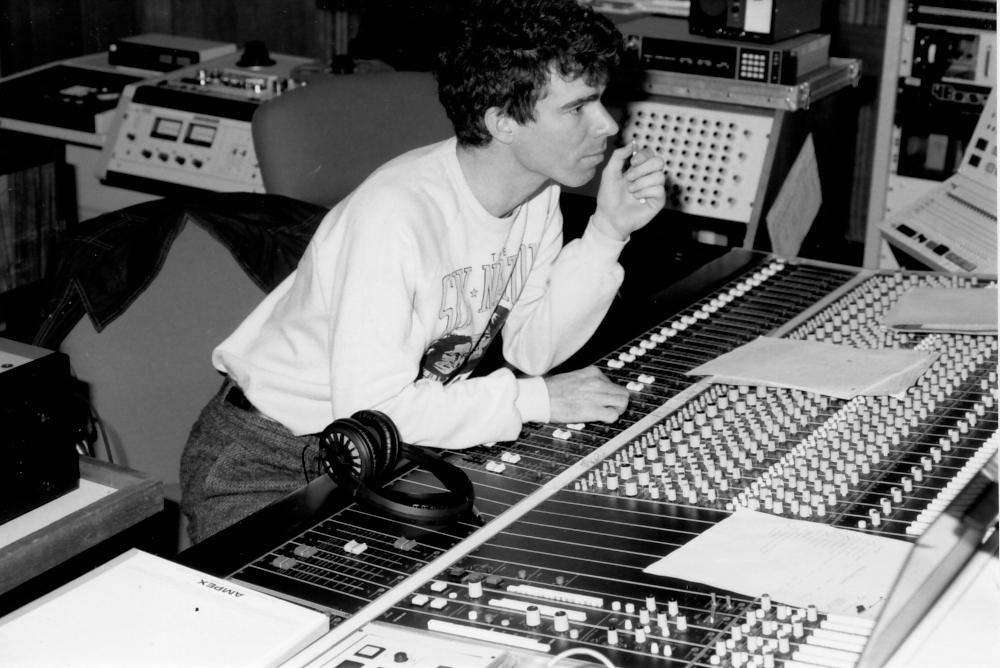 Mike Ladd at ABC studio 520 in Adelaide, circa 1986. Photo by Cathy Brooks

On my job application to the ABC in 1983 I mentioned that I was a poet, even though the job advertised was for a purely technical position as a trainee sound engineer. Positions for technicians were all that were on offer at that time in Adelaide. Landing a job as a sound engineer was a way into the monolith.

An interest in poetry seemed to count in my favour in the job interview – or at least not against me. It also helped that I’d done some short-term contract work archiving recordings I’d made in Senegal in 1982 – of street music, and the traditional poet praise singers known as les Griots – at the BBC in London and at The British Institute of Recorded Sound. The ABC was a much more Anglo organisation in those days, and the BBC was seen as a sort of paragon.

I already had a keen interest in recording and mixing voices and sounds. I’d been part of the Adelaide poetry scene since the mid-seventies, and had run a poetry program on 5UV (Radio Adelaide) at the University of Adelaide – established in 1972, as Australia’s first community radio station. In the early eighties I learned how to multi-track sound by making demo tapes with my band The Lounge, and then in a performance poetry outfit called The Drum Poets. Anyway, I got the job. My technical trainer even bought a copy of my first poetry book, though I’m not sure he liked it much!

At that time, the ABC was much better funded in real terms than it is today, and it was a more broadly cultural organisation, supporting many ‘non-mainstream’ art forms – like poetry. It also had composers, artists and writers in residence, and in-house orchestras and bands.

Poetry had been part of ABC Radio from the beginning. In the 1930s the ABC was broadcasting Shakespeare and Shelley, with voices imitating British accents; a decade later it started featuring verse dramas by Australian poets like Douglas Stewart and Rosemary Dobson. The first weekly poetry program, Quality Street, was founded in 1946 by producer John Thompson, himself a published poet. When I joined the ABC, the current poetry program was called The Poet’s Tongue and was produced by Gwen McGregor from the Radio Drama department in Sydney. It had an amazing run, nearly thirty years on air from 1957 to 1986. It was replaced by a succession of poetry programs of varying longevity: The Poetry Feature, The Box Seat and Poetica, as well as other cultural programs that featured poetry, such as Radio Helicon, The Listening Room and Inner Space. The point is, poetry had a home, a regular broadcast, a place where listeners could find poets and poets could find an audience and even be paid for their work. Contrast that with Radio National today, where programs like Earshot or AWAYE! might do the occasional one-off feature on a poet, or an obituary for a well-known poet like Les Murray or Clive James, or a poet reading a Friday poem for free on Radio National Breakfast. But there is no regularly broadcast poetry program, and no real commitment to poetry from the management.

When I graduated from my traineeship I didn’t get to record a lot of poetry at first. I did news items, talkback radio, lectures, children’s education, religious talks – some of the jobs were very boring, but others were fascinating. I was enmeshed in voices. Weary Dunlop, Plácido Domingo, Bob Hawke, Barbara Hanrahan, Bryce Courtenay, Joan Sutherland, Max Harris, Vladimir Ashkenazy: these were just some of the people I met and recorded as a sound engineer working for a range of producers. Dorothy Hewitt, Margaret Atwood, Tom Shapcott, P.K. Page, and Miroslav Holub were some of the poets I remember recording for The Poet’s Tongue and The Poetry Feature.

While I welcomed recording poets for other producers, I often felt itchy to produce the programs myself, and to make them differently. Rightly or wrongly, I sometimes felt the programs I was working on were a bit too straight: the poet introduces the poem, the poet reads the poem, and repeat. Or worse: the presenter explains the poem and the actor reads the poem as an illustration. There was not much other sound in the programs – perhaps some interlude music, but almost always kept separate from the words. I didn’t think they were using the radio medium to its full potential.

Pages: 1 2 3 4 5 6 7 8
This entry was posted in ESSAYS and tagged Mike Ladd. Bookmark the permalink.
Mike Ladd is the author of nine books of poetry and prose and approximately 200 radio features. His most recent book is Invisible Mending published by Wakefield Press and his most recent radio series is ‘The Sands of Ooldea’ broadcast on ABC Radio National’s The History Listen.