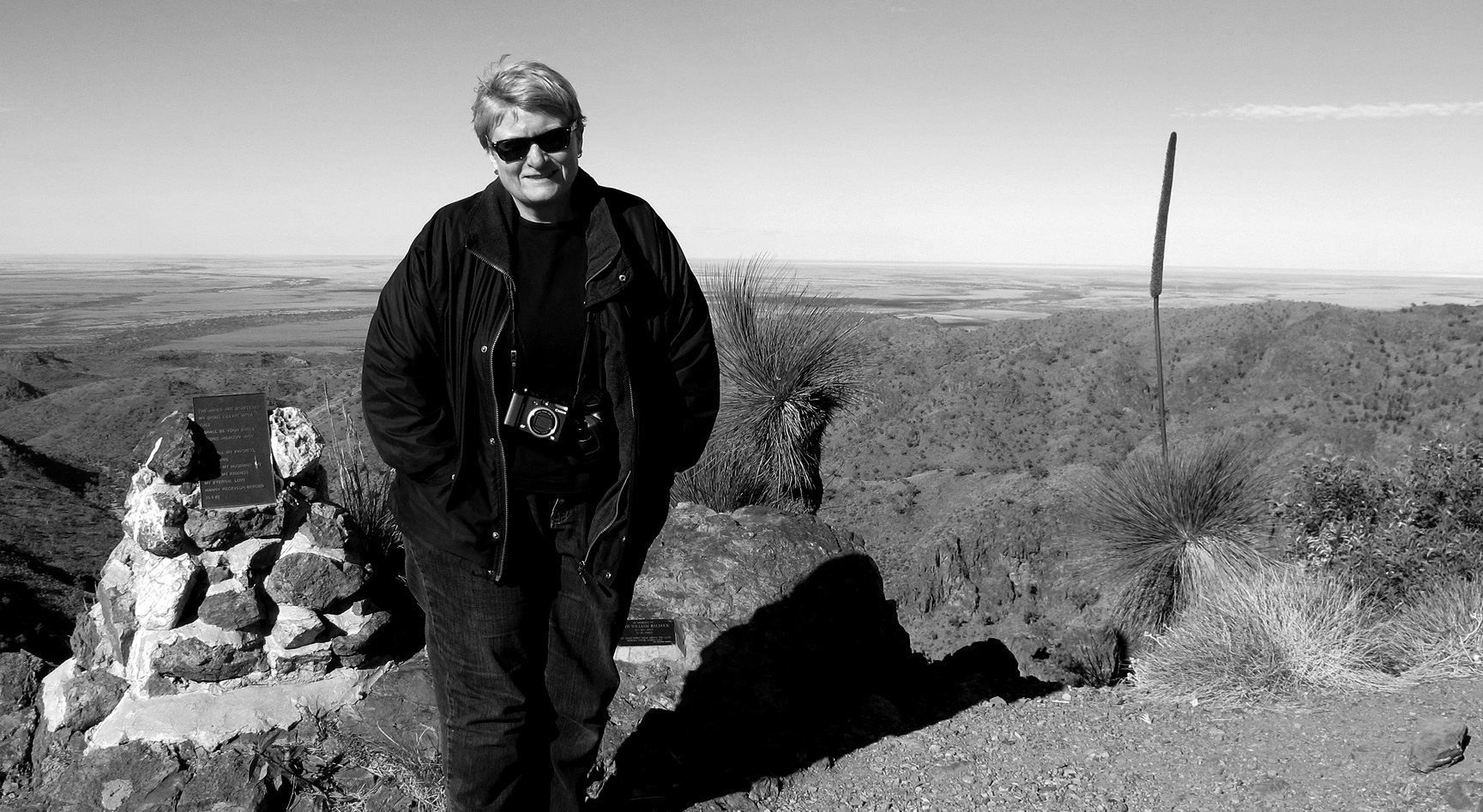 There is a photograph I have returned to several times. It was taken during the drive from Melbourne to Perth, at the petrol station which marks the town of Nullarbor, while Lucas was filling our tank. In it, a storm front is approaching, the sky a deep violet-blue which emphasises the red scrub of the plain and the bright yellow of a limestone road skirting round behind the buildings and out of sight, blocked by a makeshift white fence and hand-painted red ‘no entry’ sign.

It fascinates me, this image, in the same way the experience of the place did in the moment I took it. I have always lived on the coast. In that space, it is easy for your gaze to be drawn out to sea, to feel the body of the land behind you as a weight, to ignore or forget its particularities. But as we approached Nullarbor, the plain unfolded around us in almost guttural primary colours. It was not a space I could ignore. And for once, despite our proximity to the coast, in moving through it, my gaze was drawn inland more readily than it was outwards. Standing on the gravel apron of the petrol station, the pumps and the people noisy behind me, I could not look away.

In part, I suspect, my reaction to the place was influenced by the narratives which mediate it in popular culture. The Nullarbor to me at least (before I experienced it firsthand) was an almost mythic divide between east and west, a space of uncanny potentiality in functioning both as desert and plain, barren and yet occupied. I was not sure what to expect, but I did not anticipate beauty, richness, diversity and colour. In being there, the immediacy of the space undermined Latinate pun of its name, a demarcation of non-existence – ‘no trees’ – rather than presence. In undoing that myth, it simultaneously undermined the wider narrative of absence marked in terra nullius; it made overt the limitations in European systems of thought in engaging with place; it hinted at the arrogance of cultural hegemony implicit in defining a place through lack.

Quite simply, it surprised me. It demanded something more from me than I had expected to give. Beyond all social narratives, (if indeed that is possible), it was a place I did not know. It required me to acknowledge that. Now, in the photograph, the line of the fence feels somehow appropriate. It catches my instinctive reaction to the place – that this was a space beyond any I had previously encountered, and that in being unrecognisable, it was challenging. It felt dangerous for me to explore. Not dangerous in the sense of the lost child narrative of colonial Australian literature, nor did it threaten to overwhelm or confuse me; but dangerous in the sense that it forced me to recognise that there were spaces in the world I had no concept of, despite all my feeling of comfort in my own existence, and that this subsequently led me to the idea that there were similarly unacknowledged spaces interior to myself.

In reference to the poetry of Gig Ryan, (and specifically her collection The Last Interior (1986)), Corey Wakeling has suggested the ‘double valency’ of the interior, ‘a final unmapped destination of selfhood, and a final space yet unmapped in the state of things’ (2015: 41). As a starting point, this suggests the potentiality of poetic spaces to encapsulate a moment of encounter between the two versions of the interior. Wakeling’s phrasing of ‘the state of things’ removes the experience from cartographic mappings and geographical knowledge. Instead, it suggests the power of an unknown or unrecognised space, abstract or concrete, conceptual or physical, in lived experience. The potential for this ‘double valency’ of interiority to emerge is thus open – Wakeling reads it in Ryan’s poetic anxiety. My own experience reminds me of spaces felt in the poetry of Jill Jones, and specifically in two uncollected poems, ‘Wind Shadow’ (2014) and ‘Golden Scree’ (2012). Landscapes open in strange ways through her writing, and at unexpected moments, often turning the poetic voice back onto itself. The opening of ‘Wind Shadow’ (2014: 109), for example, seems to speak to a scene of travel, movement across a landscape:

But while the movement of a car is suggested, the ‘tar-sick travel’, it is the landscape itself which moves in the writing, holding agency over the passive viewing of the traveller. This dichotomy informs the development of the poem. European narratives of place are similarly undone, as the ‘[t]erra incognita’ of the opening line takes on a specificity of existence and the concept loses power to the space itself. The second stanza blossoms into a list of details glimpsed, which build in tone and pace to the revelation:

At this point, the relationship between space and self suggested in the opening comes to fruition, and the reality of the viewed space takes precedence over the reality of the viewer. The poetic response, in the third and fourth stanzas, seems to manifest as a desire to lose self into place, ‘to be faceless, this once,’ (109), which develops into a growing sensation of embodiment – ‘‘return to/ the living body’, let the nothingness enter,/ keep swinging in a body, your own laboratory’ (109). As I found in looking out across the Nullarbor, the space opened in the poem returns the poet to an intensified examination of self, an interior space opened by one external and unfamiliar. And, likewise, this is not without its uneasiness. In Jones’s poetics there arises a sensation of anxiety (‘work, push, and don’t push, off centre, centre’ (109)) which sits counter to the more self-assured declaration of the stand-alone final line: ‘Smell grass, cow pats, new asphalt, let’s be doing.’ (109) This moment of agency on the part of the poetic voice, structured through the embodiment found in the space, seems to open the prospect of fulfillment arising from the experience – a return to self, and a possibility for moving forward. But as a single line marked by future tense, it is both distinct from and vulnerable to the weight of the stanzas preceding and their immediacy of present. The engagement with the space offers the poet a chance to know self, and suggests a unique way of being in the world, but the experience comes with risk.

A slightly earlier poem, ‘Golden Scree’ (2012: 27-8) similarly examines an intersection of poetic space and self, but inverts the relationship opened in ‘Wind Shadow’. While the opening lines similarly seek to find meaning in a landscape, it opens with a poetic agency of movement, rather than arriving at it:

Here, the scene is static, and the poet shifts before it, but ultimately with the same result – the space as unknowable demands the recognition of similarly unknowable spaces interior to self. In this encounter, the attempt to construct the space in language (to ‘translate’ (27)) seems almost futile. There is an ambivalence to the effort in the third and fourth line of the opening which is picked up further down the stanza, where ‘a trick’ lies within ‘rows of scripted trees’, and the space evades her logic. This is the moment wherein the space itself shows movement and agency over the poetic voice, and the response holds a sense of inevitability:

Self becomes lost, overwhelmed within the scene. While the danger is the same, the anxiety that simmered subtextually in ‘Wind Shadow’ is replaced here with a sense of surrender to a meaning which cannot be understood. Reading across the two poems, the most powerful impression is that of the self as subservient to the spaces it inhabits, called into question through engagement, an exploration of space which turns inwards, becomes self-reflexive:

Simultaneously, counter to the anxiety and inevitability which marks the difference between the two poems, across both there is a sense of desire, a fascination in the space and its potentiality to transform self. The spaces invoked are wondrous and beautiful, despite (or perhaps because of) their mundanity. This is powerful writing of place.

Pages: 1 2 3
This entry was posted in ESSAYS and tagged Catherine Noske, Corey Wakeling, Gig Ryan, Jill Jones. Bookmark the permalink.
Catherine Noske is editor of Westerly Magazine at the University of Western Australia. Her first manuscript was recently shortlisted for the Dorothy Hewett Award.

One Response to Interior Spaces: Reading Landscape through Jill Jones