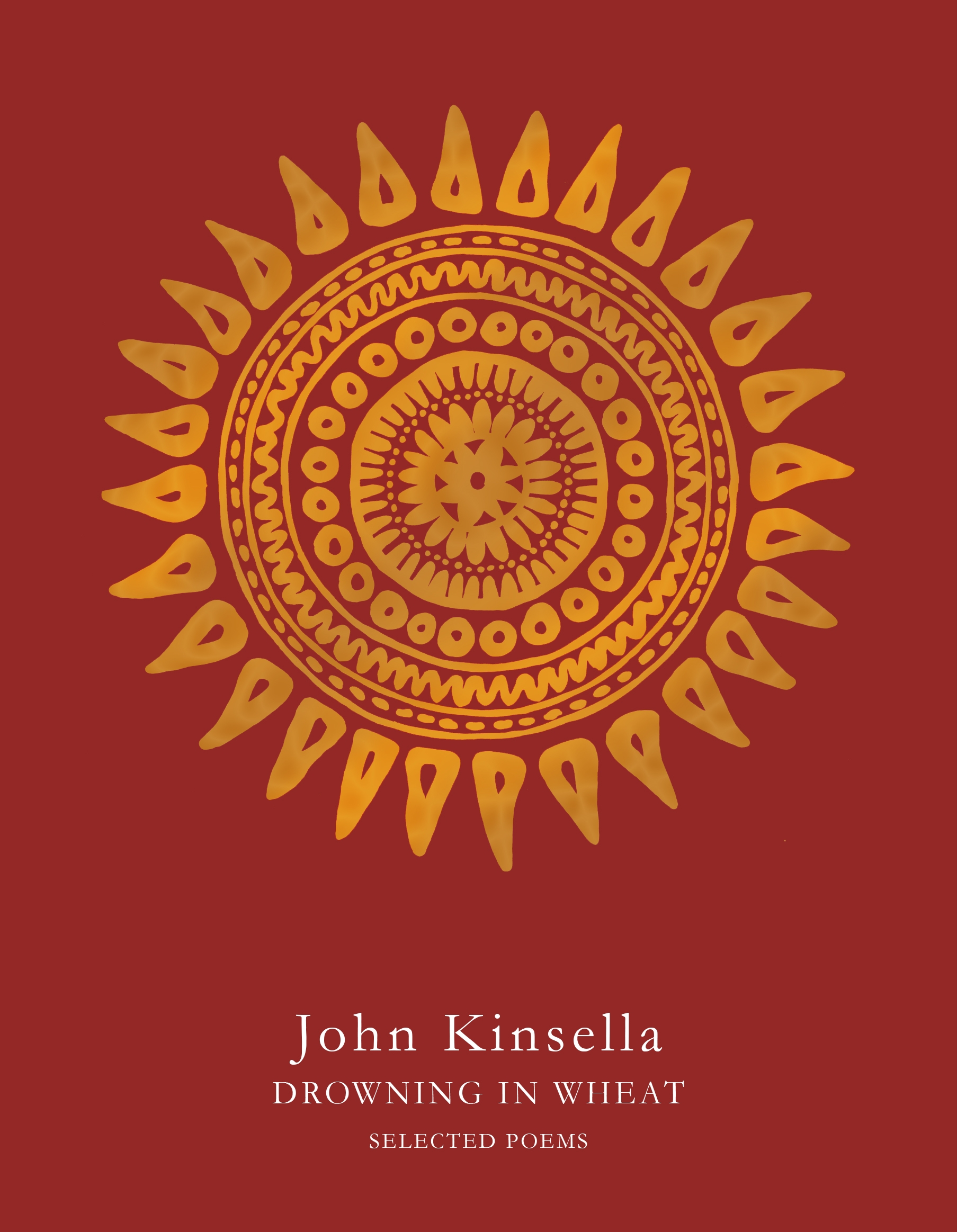 The poetry of John Kinsella will need little introduction in a forum such as this, though with the recent publication of his Drowning in Wheat: Selected Poems, aspects of Kinsella’s biography move more meaningfully into focus. Author of over forty books, Kinsella’s writing career spans three decades. What with the wealth of material available to him, Kinsella and his editors might have been spoilt for choice; though how to bring this wealth into a general coherence? I might as well say it now that this selected represents a feat in selective reading. Its poems, arranged as a continuous, unbroken sequence, and spanning nearly 400 pages, achieve a rare impetus and flow. Kinsella is, as the note to his excellent 2009 recit, Post-Colonial, memorably states, ‘vegan, anarchist, pacifist’ – edifying enough, though again a reliable vector to the concerns of this volume and to the ecological and broader political concerns of Kinsella’s oeuvre.

To drown in wheat: an unlikely circumstance, less unlikely in a context of industrial agricultural production. Further, what can it mean to drown on land, beneath the otherwise conventionally sustaining harvest? From the beginning of this book Kinsella signals a vital reconsideration of our relation with land. In an earlier poem from a previous selected, Kinsella quotes Xavier Herbert (Herbert himself echoing Pierre-Joseph Proudhon) for whom a white presence in Australia means ‘a community of thieves.’ Colonisation marks the beginning of the problem for Kinsella and materialises not only physically but in the continuous colonising claim and influence of language (construed here as a desire to possess); claims over land, language as cultural imposition – conquest would appear complete showing the coloniser to be doubly culpable, comprehensively implicated. As Kinsella writes in ‘Ornithology’: ‘That this should happen diurnally / does not spoil the observation. These binoculars being trained to look where they shouldn’t’; or, ‘the birds are prosy one might suggest but translation is tyranny.’ ‘Borrow Pit’ shares a similar view: ‘parrots an antidote to language, antidote to borrowed vision … what of me?’ Language is problematic; it claims, acting within an historically dominant anthropocentrism, and yet, in describing the human world as secondary Kinsella’s anti-pastoral contests a tradition of colonisation. Self-censorship is key, the sine qua non of Kinsella’s emancipatory politics. Beyond intrusions of language: ‘small birds sing and you don’t think of their names’.

The narrative poem, ‘The Hunt’, consolidates this sense of caution in regard to the influence of language. As the reward for the scalp of ‘The Tiger’, a boy’s uncle offers ‘fame throughout the district’; the boy finally traps The Tiger though refuses to speak of what he has done, not, it seems, because he can never articulate the unspeakable horror of The Tiger’s cruel death, but because he refuses to accept that the legend inevitably deriving from the event should stand as the surrogate and ‘surviving’ line of the dead Tiger (extinct species?). The story’s bathos is its triumph, and condemns any conflation of extinction and mythology. The boy alone will live with the facts of The Tiger’s suffering and his own cruelty.

Kinsella’s landscapes are acutely observed: ‘Apparently sectile, it flinches, though heals instantly’ (‘Fog’). They suggest a deep affinity with a land he knows and loves and with particular locations: ‘So you sit, earthed by observation and conjecture, / in expectation of a lightning strike / On Wireless Hill.’ They are frequently compelling in their diction:

The land is also characterised as wild, uncooperative and untamable. Rather than stirring pity for the settler, as per Romantic custom, this has the effect of making the attitude of colonisation look like hubris. Kinsella’s engagement with Romanticism, a literature he knows closely, means more than the subversion of any notion of an Australian arcadia. Parodic appropriations of the sublime appear to mock conquest and, moreover, serve the conviction of a tenuous human habitation on earth (and imagine a revised sublime, in which human life is absent). In his translation of Rimbaud’s ‘Le Bateau Ivre’, this sense of fragility and end-times seems naturally allied with Rimbaud’s imposing past participle: ‘I have seen … I have dreamt’. A sense of the sublime abounds: ‘the furious lapping of tides … horizons collapsing into abysses … the unmoored peninsulas.’

Kinsella has mentioned international regionalism as an important aspect of his writing, and one feels in this selection the continuing refinement of that dialogue between local (as well as parochial, and sometimes yokel) spaces, and wider cultural influence. If language claims and colonises, the word is alternately recognised by Kinsella as the pacifist’s talisman toward negotiation, refutation and reclamation. Regional identity won’t reduce to the stereotype of the small town, though rural and pastoral traditions perhaps signify an essence of white Australia; and Kinsella gladly contests the prevailing attitudes of the Australia, rural or otherwise, that he inhabits – its bigotry, violence and dull masculinity, as the ending of ‘Redneck Refutation’ illustrates:

The biographical poem, ‘Forest Encomia of the South West’ looks at this relation between poet and surrounding culture in similar ways:

Kinsella’s poems are no ‘indifferent ode[s] to otherness’; disparities are juxtaposed in remarkable ways. Perhaps alluding to Randolph Stow’s novel The Visitants, the poem ‘Visitant Eclogue’ is a good example of the way Kinsella approaches questions of conventional culture and masculine identity. It’s an evocation of the colloquial and archaic with the resolutely modern:

The worldly observations of a poltergeist in ‘Poltergeist House Eclogue’ say even more about customary human attitudes and behaviour: ‘Energy is data, first lesson we learn. It has its own propaganda. Sexfeed, screaming matches, making up … things not bargained for [!].’ What I especially enjoy about these poems is that, weighed with the eccentricities of the human element, the conventional voice of alterity (indeed the human icon for alterity) is only ever merely ‘other’; more often shown to be the more reliable observer, the more stable identity. These are self-knowing beings and aspire to no humanity. Visitant and Poltergeist do more than show up human foibles. Visitant gives no ground to his conservative counterpart, but gladly undermines him: ‘missus as signifier to your graveled utterance’ and ‘in family structure as dialect wears out / and you claim ownership.’ These poems challenge conservative attitudes but, more specifically, assert a legitimacy in the voice of the presumed other; they remind readers that our habits and prejudices are situated in language, and caution against complacency – a point again made clear in the poem ‘Breathers’, where ‘Trinkets’ have a function of ‘adulterating art’ and designers ‘insist on simplicity and sweet neglect.’ This perhaps brings us to poems like ‘Frame(d)’ and the apparent ease of Kinsella’s experimentation: