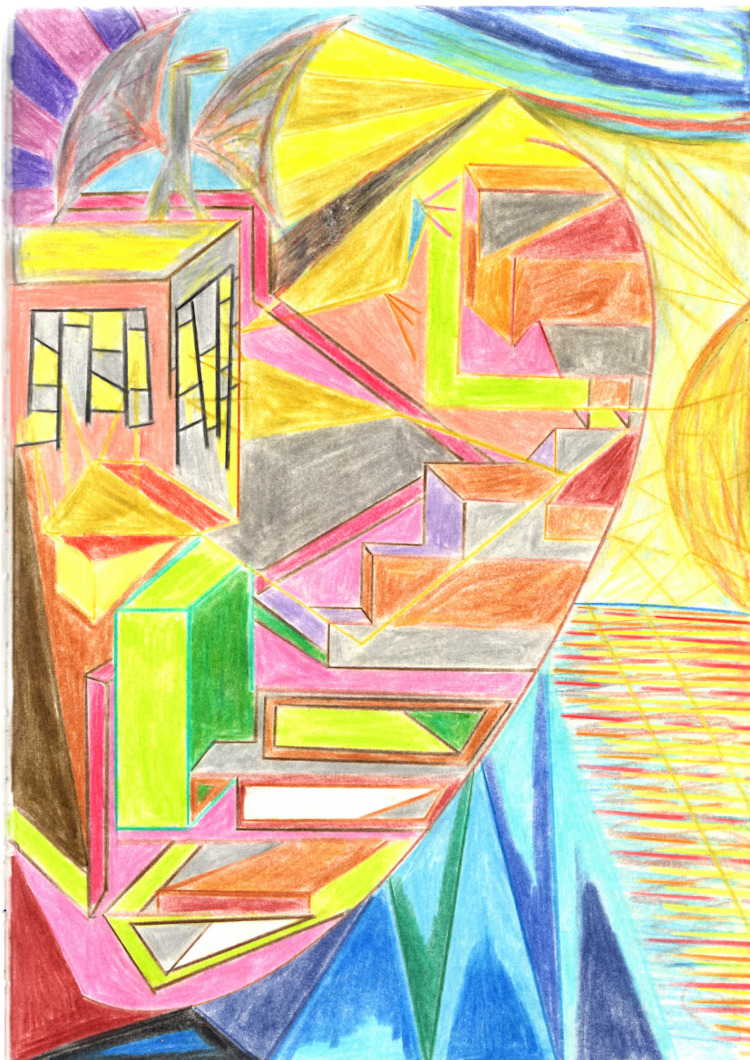 As part of my decades-long Graphology poems cycle, I have created many drawing-poems that (to my mind at least) exist between/around/across written text and visual images, and which hopefully test and blur semantic delineations and category definitions. Mostly, they exist in my journals, and co-exist with many different forms of ‘writing’ that possibly contextualises ‘legibility’.

I see ‘writing’ in everything around me, and do not think ‘script’ is the definitive form of ‘writing’. When I first read Ray Bradbury’s ‘The Illustrated Man’ at twelve, I thought that body images conveying/telling stories like movies seemed logical: when I see a ‘still’ visual image, it always moves, it is always active, and is always an act of writing and being written. I look at a ‘natural’ swirl in sand caused by wind, erosion, the movement of creatures, as being a form of writing: a record, a telling, of what has been and how that sand has interacted with the ‘world’, and how it has been interacted with.

Handwriting, something I do poorly but am infinitely fascinated by, always conveys more (to me) the more it breaks away from its system/s of constraint. ‘Scrappy’ handwriting is often an illustration of so much more than the symbols it’s supposed to replicate, and thus so much more than what it is intended to represent. Meaning exists in the incident as much as the intent. My work pages are often covered with doodling.

Also, over the decades, I have been writing different versions of Dante – Divine Comedy: Journeys Through a Regional Geography which responded to a specific region of the Western Australian ‘wheatbelt’ on Ballardong Noongar country; On the Outskirts which responded to Blake’s illustrations to Dante’s Comedy; and The Musical Dante which responds to musical interpretations of Dante (especially Liszt’s), but also bringing other music into vicinage with Dante’s Comedy. The Dante Graphology Drawing Poems are a fourth part of my engagements with the work of Dante (and in all of these works I also engage with other aspects of Dante’s life and practice, especially La Vita Nuova), and constitute an engagement with the historical approaches to Dante that impress on contemporary readers so much of their visual perception of Dante (e.g. Botticelli, Gustav Doré, Blake, the 1911 Italian silent film L’Inferno by Francesco Bertolini-Adolfo Padovan-Giuseppe De Liguoro).

But the Dante drawing-poems are mainly concerned with ‘reading’ the Comedy through a series of different personal lenses over a period of time. They are visual-temporal distortions. In an archive somewhere, there are a number of my earliest attempts at drawing-poeticising Dante’s Comedy, maybe done when I was around 22, which predate the beginning of the Graphology poem cycle by some years. Anyway, autobiographising aside, the drawing-poems around Dante exist as a kind of extension of what I’ve been doing for so long – try to find different ways into reading Dante, especially what I call ‘the ecological Dante’.

Here is a selection of Graphology Dante Drawing Poems. I have created many dozens of such works in which text is either overtly part of the images, or is sublimated through signs or even drawn over to make it ‘vanish’, with traces remaining in abstracted ways. Or, the images are words. Really, the images are an orthography – they are ‘how’ the words come out in this reconceptualising: a rebus, a semaphore, a denial of any primacy of ‘written language’ that denies the separateness of ‘illustration’.

Pages: 1 2 3 4 5 6 7 8 9 10 11 12 13 14
This entry was posted in ARTWORKS and tagged John Kinsella. Bookmark the permalink.
John Kinsella's most recent works include the poetry volumes Drowning in Wheat: Selected Poems (Picador, 2016) and Open Door (UWAP, 2018), the story collections Crow’s Breath (Transit Lounge 2015) and Old Growth (Transit Lounge, 2017), and the critical volume Polysituatedness (Manchester University Press, 2017). Recent novels are Lucida Intervalla (UWAP, 2018) and Hollow Earth (Transit Lounge, 2019). He often works in collaboration with other poets, artists, musicians, and activists. With Tracy Ryan he is the co-editor of The Fremantle Press Anthology of Western Australian Poetry (2017). He is a Fellow of Churchill College, Cambridge University, and Emeritus Professor of Literature and Environment at Curtin University, Western Australia. He lives on Ballardong Noongar land at Jam Tree Gully in the Western Australian wheatbelt, and has also lived in the USA, UK and Ireland.