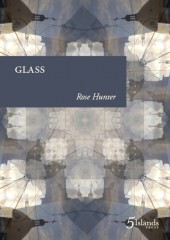 Glass is a collection of elegiac poems, a memoir of free verse about the poet’s travels through Mexico and her own debilitating ailment. The ‘you’ in book is addressed with a certain fondness (‘where are you / i feel of course now we would have the most wonderful conversation’) and an intimacy that suggests the poet is speaking to someone she was once romantically involved with:

The first poem ‘mixquic’ is addressed to ‘sean’, whom the book is also, in part, dedicated to: ‘for sean, again / for mum and dad’. The ‘you’ in the poems, it might be assumed, is Sean.

There are many allusions to Sean’s death. Whereas in ‘yellow’ Hunter makes reference – although not necessarily literal – to ‘cancers’, in ‘el edén’ Sean’s passing is the result of an accident:

There is also a passage that expresses guilt about the death of an intimate partner – presumably Sean – from alcoholism:

Sean is the addressee of most of the poems and in this sense the book reads like a letter to the departed. Glass, however, is by no means epistolary in form or style:

Many of the poems, such as ‘bajío’, include uncredited epigraphs:

Perhaps the epigraphs are fragments of overheard conversation, or words written by Hunter herself as ‘quotations’ of divergent voices or viewpoints. The epigraph in ‘bajío’ seems to suggest the existence of an escaped dog and, like most of the epigraphs in Glass, has an equivocal connection to the poem itself, which begins:

This passage, which could be observed as somewhat of a departure from personal narrative voice that continues more or less throughout the collection, brings to mind Gérard de Nerval, the nineteenth-century French poet who is said to have taken a lobster on a blue ribbon for a walk through Paris. Also, it is reminiscent in certain ways of Gabriel García Márquez. Hunter normalises the lobster on a leash with her conversational tone (‘can they even go on land … ?’) in much the same way as Márquez uses fairly ordinary language to describe fantastic occurrences. Hunter’s lobster on a leash is by no means physically implausible or as irrefutably surrealist as, say, García Márquez’s story ‘A Very Old Man with Enormous Wings’ in which an angel falls from the sky during a storm, but the two are comparable in their use of dry, pragmatic language that draws the reader into an imagined realm:

He argued that if wings were not the essential elements in determining the difference between a hawk and an airplane, they were even less so in the recognition of angels.

In Hunter’s poem, however, the fantasy lasts for less than a stanza before she flips into stream of consciousness:

Elsewhere in the book, Hunter’s recollections of Sean and Mexico are often nostalgic, but ‘bajío’ is decidedly unsentimental:

Hunter, particularly in the ‘brisbane’ chapter, also refers to her own encumbering illness: ‘we just don’t know why / i have dead legs’. At the same time, however, the speaker is incapable of forgetting Sean:

Hunter’s use of form – the indented lines, the large gaps within the lines, the relentless enjambment – is central to her stream of consciousness style. In ‘wickham terrace’, among other poems, the sentences are enjambed not only over lines and stanzas, but also over numbered sections:

The rarity of end-stopped lines and the way in which Hunter positions the sentences across the page accentuates the free associative design of her syntax. When end-stopped lines are included (‘did they not fight enough / did they not love enough’) they are all the more forceful. The fact that Hunter uses enjambment across numbered sections and their respective page breaks and the way she often begins poems with ‘and’ or ‘or’ contribute to the impression that even though there are 21 poems divided into three chapters (‘mexico city’, ‘jalisco’, and ‘brisbane’) Glass in many ways reads like one extended poem. The extent to which Glass is autobiographical is of course irrelevant, but the personal and somewhat regretful tone that pervades the collection make the poems nearly always compelling.

This entry was posted in BOOK REVIEWS and tagged Kishore Ryan, Rose Hunter. Bookmark the permalink.
Kishore Ryan recently interned at Cordite Poetry Review and is currently studying composition and literature at Monash University. He is the son of the poet Max Ryan, whom he plays in a band called Hexham with. He also plays drums with Mick Turner (Dirty Three) and Lisa Salvo (On Diamond). His composition ‘I Purchased Two Donkeys’ for percussion and electronics will be performed at the 2018 Bendigo International Festival of Exploratory Music by Line Upon Line (USA). His poems have been long-listed in Poetry Society’s National Poetry Competition and published in Malevolent Soap. He was also a semi-finalist in 92Y’s 2016 Discovery/Boston Review Poetry Contest.