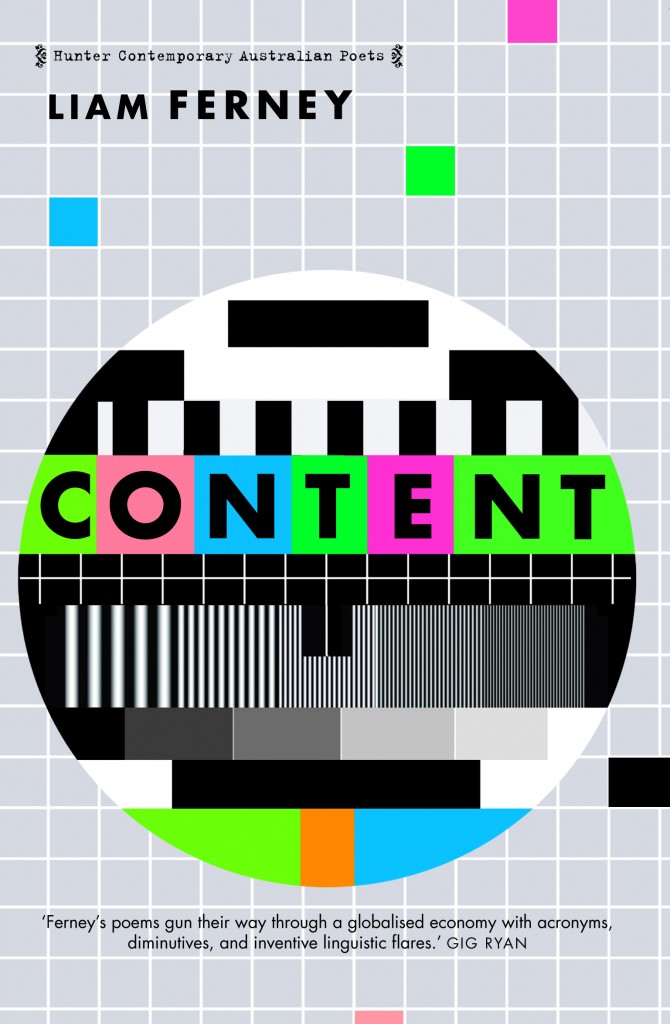 Liam Ferney’s Content is a book of poems largely composed out of memes, or slices of culture. The notes at the back of the book state:

Some of these poems contain allusions, sentiments, words, phrases, sentences and images that have been lifted from the culture. And Cordite’s comments. If you’re not sure, Google it. At this stage your guess is as good as mine.

When Ferney says ‘some’ of these poems, he should probably say ‘all.’ Thing is, if citations had been included, they would likely have taken up more space than the poems, in which practically every word is a nod or a wink to something. I’ve had to do a fair bit of Googling, and was left feeling I’d hitherto been a little out of the loop, a tad off the pace. To read Content is to have a crack at playing catch-up with a fugitive world. Ferney allows culture’s proliferations, its ‘tall poppies,’ kooky artefacts and BS, to run rampant, do battle with each other, flex their absurdity and eye-of-the-beholder beauty.

Ferney specialises in short and fast poems that are pithy, irreverent, and predominantly satirical. This is poetry as repartee, in response to a bankrupt culture of finance, status anxiety and political dishonesty, and to the airbrushers amongst us who attempt to sell all of this as A-okay.

The first stanza of ‘a new England’ is almost a thumbnail for the collection:

‘Freienwalde a.O.’ (the title refers to German spa town) exemplifies the fun Ferney has in torquing memes and quotes, e.g. ‘endure / the slings and arrows / of fatuous tax returns’. And the fact that he likes a good pun: ‘frolicking in a spa town / on Poland’s Western boarder’. These lines made me do a double take, as if I’d spotted a misprint. But in fact it’s a double pun involving both ‘Western’ and ‘boarder’ (as opposed to ‘western border’). Another pair of puns bookends ‘The Sistine Chapel’, with ‘height art’ morphing into ‘high tart’. And Ferney occasionally employs rhyme as a form of emphasis that also invites the comic, e.g. ‘How much proof do you need / that genius don’t guarantee / the zeros on your fee?’ (‘I Live Off You,’ ).

Content is described on the back cover as ‘a hand grenade tossed into the middle of polite society.’ One doesn’t expect subtlety after a claim like that. But sure, there are subtleties, although there’s also an overriding directness, a kind of confidence, gusto or nerve to these poems that seems very masculine, marvelous and tough (to twist a line from Ted Berrigan), streetwise, and not so much world-weary as world-charged. It all feels very up-to-the-minute – or as much as that’s possible for a print book with a long-ish lead time, competing with the pace of media, memes, fashion, ‘hip’ language, etc. ‘Hip Replacement,’ for instance, could be (partly) about Turnbull (the ‘hip’ replacement for Abbott): ‘as annoying as that $400 jacket / you bought in june / but by september / can no longer stand’.

‘For Laura’ and ‘Chocolate Soldiers’ (also epigraphed ‘For Laura’) seem to have a different tone to the poems that surround them. They might be love poems, or relationship poems, but if so, the love/relationship seems consumed by the world and its over-played riffs. In ‘For Laura,’ moments or memories of possible beauty or intimacy seem to be diverted by the ‘debris’ of work, while a consumerist mission-impossible is playfully staged in ‘Chocolate Soldiers’:

These stanzas seem to offer hints of nostalgia, sex and a searched-for(-in-vain) contentment, all embedded in consumerist-ideology-as-allegory.

‘Summer Anthem’ begins by claiming ‘we have made knowledge redundant // in time for cigarettes & g&ts / at the pool’. These lines double down on the platitude that knowledge has never been so accessible; but, Ferney seems to argue in Content, neither has it ever seemed so elusive, what with pollies, media moguls and cheque’s-in-the-mail opinion-makers running constant interference. Nevertheless, the question must be asked:

A network going down isn’t an unheard-of occurrence in terms of occasional outages, but these lines of Ferney’s retell a running generational joke that raises the hypothetical question of what might happen if the networks went down for a longer term, or – could it happen? – for good. What of knowledge then? What of modes of life supposedly founded upon ‘cloud-based connectivity’? What of culture, what of content(ment)? It’s not a trivial hypothetical at all.

To me the double entendre of the book’s title suggests the idea of being content with content – as if there were nothing else to life, no alternative life to imagine or to strive for. Although perhaps there’s another pun embedded here: a con tent? The test pattern on the cover seems to say, ‘We’re experiencing technical difficulties; do not adjust your set,’ or else ‘There’s nothing to see here.’ But Ferney offers plenty to see, if you’re clued-up and sharp enough to catch it. And Content does seem to argue for a life, or lives, other than the ones skewered in its poems; it packs a hefty, laughing disavowal of the status quo.

This entry was posted in BOOK REVIEWS and tagged liam ferney, Stu Hatton. Bookmark the permalink.
Stu Hatton is an autistic writer/editor who lives and works on unceded Dja Dja Wurrung country. His work has appeared in The Age, Best Australian Poems 2012, Overland, Southerly, and elsewhere.