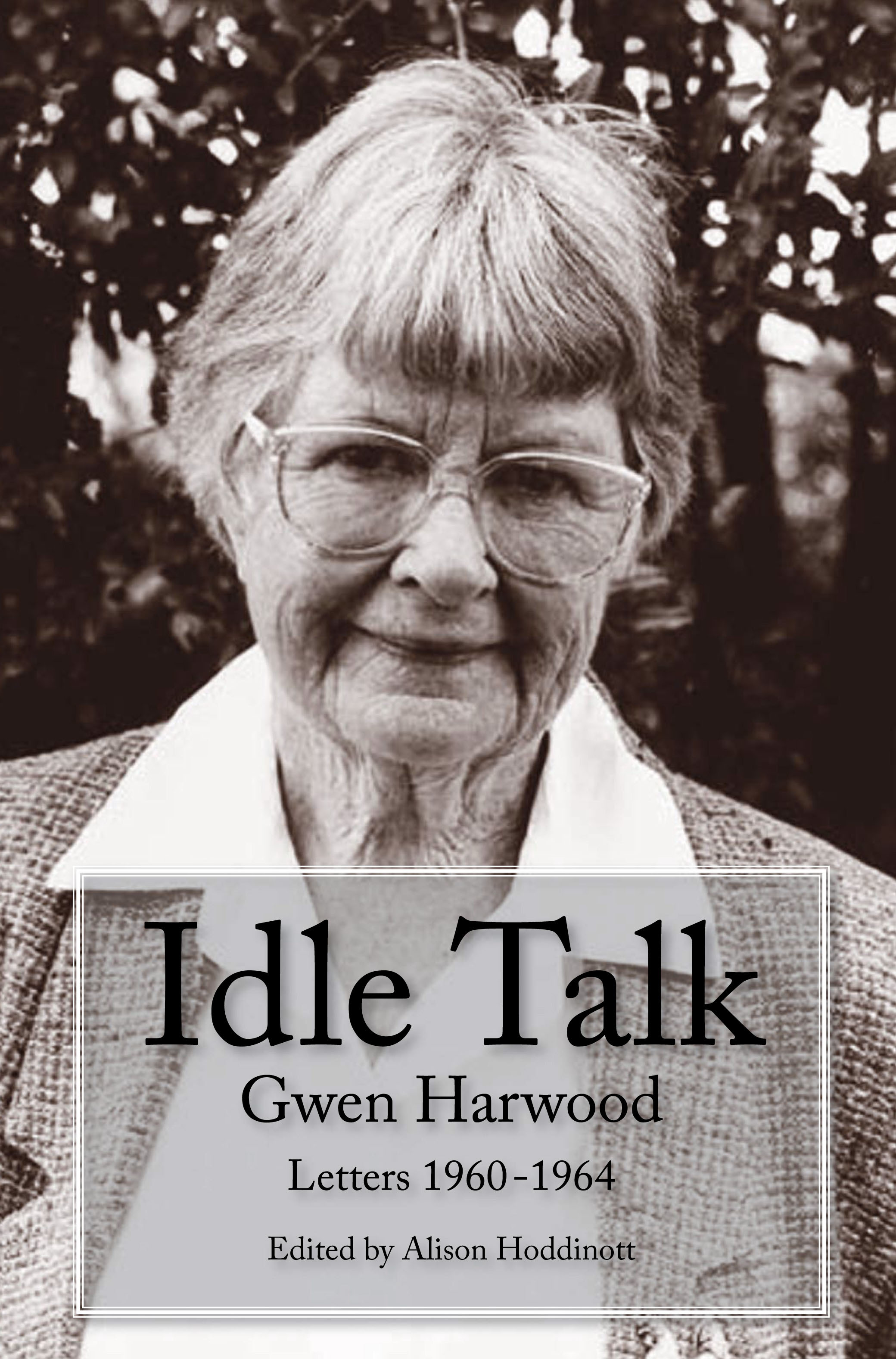 The letters in this illuminating and entertaining volume, written by Gwen Harwood to her friend Alison Hoddinott (the collection’s editor) and her husband Bill Hoddinott, cover the period leading to the publication of Harwood’s first book of poems. 1960-1964 were the years in which Gwen Harwood’s poetry was coming to light in literary magazines in Australia, sometimes under her own name, sometimes under one of her three nom-de-plumes: Walter Lehmann, Francis Geyer and Miriam Stone. Whether they were like Pessoa’s heteronyms – more literary personae than simply pseudonyms – I’m still not sure. During this period, under the name of Walter Lehmann, Harwood framed her notorious hoax in the pages of The Bulletin. The editors failed to recognise the now-famous acrostic of her two sonnets that read: So Long Bulletin; Fuck All Editors. These were important years for Harwood. Neither her literary skill nor her sense of her own literary worth seem to have been in question at the point where these letters start. Certainly, what eluded Harwood at this juncture was the recognition of her brilliance in the eyes of the male dominated literary establishment of the time.

McAuley has written to Geyer saying he finds his verse interesting (he never said that to ME). Geyer has got Christesen to accept two poems of intolerable nonsense, and has sold some comparatively harmless ones to The Bulletin and received a note from Douglas Stewart inviting him to call any day. You see all’s in a name …

She then proceeds to write how McAuley ‘had rejected magnificent works of Gwen Harwood and yet taken the undistinguished Mr Geyer’s.’ McAuley published two out of 30 poems by Harwood in two years. It baffles me, a contemporary reader, that while Harwood expresses affront at McAuley’s poor critical judgement (she believed the Harwood poems to be superior to the Lehmann poems he accepted), she didn’t rail against this as gender-based bias.

Harwood had a wicked and incisive sense of humour. Her letters and postcards are often very funny, her descriptions acute. The ripple effect on those both in the know and ignorant of her acrostics is conveyed with fiendish relish. Her wit and irony is particularly present in the first half of the book; she is in her satirical element recounting social encounters on buses, at literary events or academic dinners. In content her letters move mainly between poetry, literary conversation and domestic minutiae. Dialogue is keenly and often mischievously recalled, often so vividly that one gains intimate insight, as if by way of hand-held camera, into exchanges between people. These letters offer an illuminating insight into the personalities of McAuley, A. D. Hope, Vincent Buckley and many others, including the irritating Christopher Hollis.

I have always held reservations about the genre of letters; I can never fully cast off a feeling of intrusion, of prying into private worlds when reading letters that were never meant for me. Harwood repeatedly told the Hoddinotts to destroy her letters of 1960, which they dutifully did. Towards the end of Harwood’s life, while discussing a possible biography, she asked: ‘Al, what happened to all those letters I wrote to you in 1960?’ Hoddinott, defending herself truthfully, replied: ‘But Gwen, you told us to destroy them.’ Harwood: ‘You shouldn’t have taken any notice of me. Writers always say that. They don’t mean it.’ This dialogue, included before the first letter, lends justification to the letters’ publication; it is a permission of sorts. Some of these letters were written on paper, many of them were written on ‘Sappho cards,’ home made postcards with cut-out images from Victorian and Edwardian books and magazines on the front; these she often annotated. At times there is a relationship, direct or oblique, between image and content; at other times her selection seems completely whimsical. The collection is certainly enhanced by their inclusion.

Harwood and the Hoddinotts exchange a myriad of intimate details of cooking, recipes, home maintenance, family ailments, children’s progress, friendships, books, articles and weather, the latter invariably leading to her frequent refrain: ‘Loathsome Hobart! Frigid Tasmania!’; ‘I HATE HOBART. When do we leave?’ (The question: why did they never leave? remains an enigma). The collection is a tribute to a loving and vital friendship between four people, all of whom correspond regularly with one another. The letters are also a remarkable record of cultural and technological history: life without fridges, television, gramophones; the ephemera of popular music (we hear her son singing each new hit as he walks around the house); the labour demarcation lines between men and women in the 1960s. In the background of all of these things is the dark shadow of the Sydney Sparks Orr case that deeply divided the University of Tasmania and the broader community.

Harwood’s letters dextrously stitch all such elements of her life into the main fabric that is literary conversation and analysis of the poetry she is reading, writing and publishing under different names (occasionally three within the one journal), and the writers she is meeting. Her life was full to say the least. As well as writing and publishing exceptional poetry by four different authors, three of whom were fictional, Harwood was a busy mother of four growing children. She grew, harvested, preserved and cooked food that she provided in abundance for her family, their friends, school fairs and academic gatherings with astonishing energy and generosity.

Harwood’s hospitality is a common theme in Robyn Mathison and Robert Cox’s Behind the Masks: Gwen Harwood Remembered by Her Friends. By the end of Idle Talk, the weight of her hospitality – the endless stream of literary blokes (and their children, McAuley brought his five regularly) eating scones or chicken or fish at her table – feels oppressive. What did she get in return? I suppose their vital conversation, vicarious enjoyment of their world and a doorway, paradoxically out of domesticity. I wonder… did any of them ever recognise the effort of producing a volume of poetry while running a household of six, cleaning, preparing three meals a day? Most of her visitors had a workplace, a paid position, an active intellectual world and a wife to look after their children if they had them. Where did Harwood write? At the kitchen sink I remember someone telling me once. Remarkably she remained undaunted and wrote many brilliant poems through this period.

These letters imply a little and a lot about the relationship between Harwood and her husband Bill. In her introduction Hoddinott gives glimpses into the dynamics between them. Unadorned with allusions to Bill’s sense of humour or irony, such comments as the following are left for us to interpret:

In my second year, student gossip reported that Mr Harwood’s wife had red hair and that she wrote poetry… interesting in the light of our tutorial discussions about poetry and the creative imagination. On one occasion a student raised the subject of courses in creative writing and their importance in nurturing the arts. Mr Harwood looked at him with polite scepticism. ‘In my experience,’ he observed, ‘if a person wants to write, they will write. There is nothing you can do to stop them.’

Thankfully, Gwen Harwood’s illustrious achievement as a poet was unstoppable. And thankfully the Hoddinotts didn’t see fit to obey Harwood’s early directives to burn all of her correspondence. Without these letters the Australian literary archives would have been much poorer. This book is a valuable contribution to literary and cultural history. It affords a fascinating glimpse into the mind and life behind the poems, providing rich insight into Harwood as a tour de force who astutely recognised her own gifts and demanded to be heard.

This entry was posted in BOOK REVIEWS and tagged Alison Hoddinott, Gwen Harwood, Sarah Day. Bookmark the permalink.
Sarah Day’s most recent book is Tempo (Puncher & Wattmann, 2013); it was shortlisted for the Prime Minister’s Literary Awards and won the University of Melbourne Wesley Michelle Wright Prize. She lives in Hobart where she teaches Year 12 Creative Writing. Her poems have been widely anthologised in Australia and overseas.