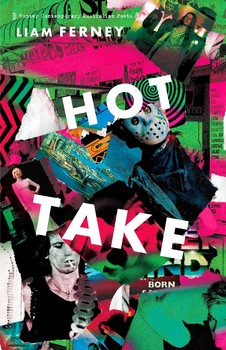 In a review for Cordite, Stu Hatton commented that the reader will need to google the obscure references in Liam Ferney’s poetry in order to keep up. The epigraph of the poet’s fourth collection reminds us of this:

This quote is lifted from Milton William Cooper’s book, Behold a Pale Horse. A quick google-search and Wiki-read revealed that Cooper was an American conspiracy theorist whose book ‘unfolds the truth about the assassination of John F Kennedy, the war on drugs, the Secret Government, and UFOs.’ Like a conspiracy theory, Hot Take attempts to expose the world’s hidden logic in all of its confronting glory.

In particular, Ferney dutifully exemplifies theories and practices developed by the New York School, then refined by their antipodean counterparts. He pays homage to O’Hara in the poem ‘Sardines’ by going on his nerve to produce a Ken Bolton-esque poem-in-progress that revels in its almost flippant existence: ‘this is a poem because it has words in it.’ Gig Ryan’s sardonic tone pervades the collection like ‘cigarette smoke and a hangover’s regrets’ (‘After the Rain’). The poem ‘Modern Love’ does more than use Forbes’ classic ‘Speed, a pastoral’ as a scaffold: it brings the Forbesian sense of devotion and craft into the Snapchat age: ‘It’s weeks since you’ve slept / & it’s not fun to stay up all night / tapping these iNotes of poetry / just thinking about is bad for you—’. ‘On the occasion of Buzz Aldrin shooting down a conspiracy theorist on Twitter’ is reminiscent of Benjamin Frater at his most absurd and dynamic. The ease with which Ferney uses sporting metaphors reminds me of Peter Rose’s prowess using cricket and footy imagery. This potentially reductive list of influences shows Ferney to be far more than an imaginative hack: his confidence in using an array of techniques confirms the poet as a diligent and devoted student of OzPo and its traditions.

A distinctive wit characterises each poem in Hot Take as irony dominates this collection. Only Ferney could write ‘[b]y the time you stop paying your HECS debt / you’ll understand no one cares about what you have to say’ or ‘PTSD was straightforward / when you could just belt your wife’ without it seeming crass. If you think Ferney is being genuine, then the joke’s on you: ‘Of course I’m obtuse. / Civilisation is all about / me not telling you what I really think.’ This humour, deftly laced with cynicism and mordancy, attacks our sensibilities ‘like a jihadi’s dull blade through / an aid worker’s pale neck’. This is seemingly the purpose of the collection: to zap the reader out of any complacency toward the world and its realities. Above all though, Hot Take is funny. Lines such as ‘PWN the n00b descending the staircase, / these Chads will know the beta’s far cry’ transcend literary theory and are simply hilarious.

Despite its range of techniques, Hot Take still maintains a unifying aesthetic. Politics, economics, sport, Brisbane, twitter, drugs, millennial slang and naff Australiana are all poured into these formal vessels to produce a distinctly Fernian effect. As a fellow sports-nut, I always enjoy it when Ferney uses sporting imagery to personify abstract ideas. Indeed, sport’s woefully ignorant attempt at being apolitical is exactly the type of flawed logic that Ferney’s poems target. Mixing sport and politics creates confronting and farcical lines like ‘graham richardson in dick togs / staggering through the last k of the city 2 surf’. Ferney’s poems themselves are like modern athletes: juiced-up and muscular.

Ferney’s editorial for Rabbit’s SPORT issue (2018) explores the relationship between sport, poetry, politics, and economics: ‘The jubilation, the actual physical sensation of snatching victory out of the jaws of defeat refuses commodification in the same way that a work of art can be bought or sold, but the way it moves you can’t.’ The deftness of the poem ‘63 no’ which deals with Phillip Hughes’ tragic death embodies this: ‘we struggle / with the ramifications / of a hook shot’. With Ferney, poetry, sport, economics, and politics are so tightly intertwined it’s impossible to separate them. This is typical of Ferney, always hyper-aware of the world’s logic and its structural interconnectedness.

Pages: 1 2
This entry was posted in BOOK REVIEWS and tagged Jack Kelly, liam ferney. Bookmark the permalink.
Jack Kelly lives in Melbourne and studies at Monash University. He has been published in Voiceworks, Verge and Otoliths.