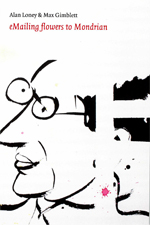 There are challenging layers to Alan Loney and Max Gimblett’s twenty-page poem, eMailing flowers to Mondrian. The first may appear self-indulgent, the second impenetrable, and the third overly personal; but, taken as a whole and meditated upon, this aesthetically pleasing saddle-stapled book turns out to be a cunning memoir.

The outermost layer is the poem’s ‘found’ metatextual nature; as explained immediately in Loney’s preface, it is made from verbatim snippets of the emails that went between himself and Gimblett as they collaborated on Mondrian’s Flowers, a lush artist’s book (Granary Press, 2002) containing a three-part poetic biography of Piet Mondrian. The next layer is emulative; ‘Mondrian’s invention of the pure plastic values of Neo Plasticism’, as Gimblett writes in his preface, is interpreted and demonstrated in the poem’s form. And, at its core, the poem is slyly autobiographical. As Loney admits, the quoted emails are not simply functional correspondence between poet and artist but ‘carry a burden of ‘other matters’’. In the unattributed ‘I’ of the poem, the reader finds an amalgam of Loney’s and Gimblett’s voices.

Loney, born in 1940 in New Zealand and now living in Melbourne, is an internationally renowned poet, critic, publisher and printer; Hawk Press is his own creation. Gimblett, also born in New Zealand, in 1935, now based in Manhattan, is a prolific painter and sculptor, whose work spans a broad stylistic range and is inflected with Western Buddhist philosophy. Mondrian, born in 1872 in the Netherlands, moved to Paris in 1906, and is best known for his geometric, primary-coloured grids. In ‘Neo-Plasticism in Pictorial Art’, he declared, ‘As a pure representation of the human mind, art will express itself in an aesthetically purified, that is to say, abstract form. The new plastic idea cannot therefore, take the form of a natural or concrete representation.’ Mondrian’s lesser known watercolours of gladioli and amaryllis flouted his ‘new plastic idea’. As fluid and figurative as his grids are precise and abstract, Mondrian’s anomalous flowers have fascinated the two other expatriates.

Loney and Gimblett’s first collaboration, Mondrian’s Flowers, is a scarce beauty: heavy red cover, watercolour rough-cut pages, exposed primary-coloured binding. Gimblett’s bright splashes of blossom alternate with sections of Loney’s poem. Only 41 copies exist; one is in the University of Melbourne Library’s Special Collections. While eMailing Flowers to Mondrian is not impossibly locked without the key of its artist’s book precedent, it does yield more for the reader who has seen the original work. Loney’s description of the artist’s practice in Mondrian’s Flowers offers a means interpreting his own technique in eMailing Flowers to Mondrian:

In a shift from moonlit evening to vivid sunset, he labors an indistinct transition between land sea sky, a fading demarcation between drawing & the work, something of a much more intimate nature.

The intimately faded demarcation between poem and email, personal life and work, abstraction and representation, is evident in eMailing Flowers to Mondrian’s lowercase, unpunctuated lines. The reader is invited to eavesdrop on the negotiations between poet and painter that allowed the text and image to be complementary:

The commentary on the act of collaboration is one of the most engaging aspects of the poem. The exchange, originally meant for private consumption, sometimes has a melodramatic candour (‘spilling ink onto the pages/ of our desire we do not/ know a thing about it’), and its philosophising is occasionally unsubtle:

However, these uneven patches have the charm of authenticity, and contribute to the poem’s quality of memoir. In a 2008 interview with Sally Blundell for the New Zealand The Listener, Loney shared his opinion on autobiography:

‘If you were to put down on paper all the words you saw in a day – in newspapers, in signs seen from the car or the bus – you would end up with a record of your readerly experience, but it would not be a narrative. Our own experience is like that. That is why autobiography is a lie.’

The collage of verbatim email excerpts in eMailing Flowers to Mondrian appears to be a record of readerly and writer experience. In its spacious absence of narrative and attention to the abstract quality of phrases out of their original context, this poem seems to capture the experience of collaboration with reliable immediacy.

Janet Malcolm has likened conventional narrative biography to ‘fresh produce … converted into canned vegetables … far removed from their source – altered from the plant with soil clinging to its roots’. eMailing Flowers to Mondrian is so covered in soil that it may not be immediately obvious what one is consuming. However, the freshness of the lyrical collage of collaboration and friendship rewards the reader’s perseverance.

This entry was posted in BOOK REVIEWS and tagged Alan Loney, Amy Brown, Max Gimblett. Bookmark the permalink.
Amy Brown teaches creative writing at the University of Melbourne. Her first poetry collection, The Propaganda Poster Girl, was shortlisted for Best First Book at the 2009 New Zealand Book Awards. The Odour of Sanctity, a contemporary epic poem that formed the creative half of her doctoral thesis, will be released in July 2013