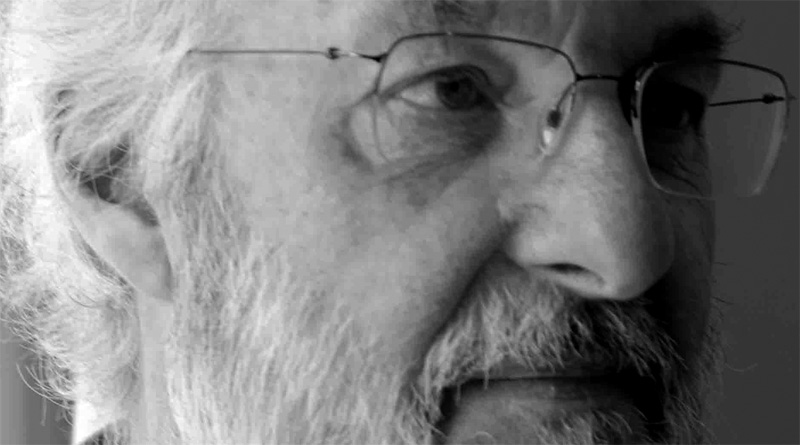 I first met Alan Loney at the University of Pennsylvania in 2004. I was studying there at the time and Alan had been invited as a guest of Robert Creeley at SUNY Buffalo. As part of his American tour Charles Bernstein hosted Alan at Penn, where he gave a reading at the Kelly Writers House and met with students of Charles’ experimental writing class entitled ‘Close Encounters of the Third Kind’. We students met Alan at the Museum of Contemporary Art where Andy Warhol had his first solo exhibition some years prior and where Japanese artist Yoshitomo Nara was having a show. Students read Alan poems they’d written and he responded graciously with precise and generous words. That evening he gave a wonderful performance at the Writers House, which can be found on Penn Sound. I lost contact with Alan subsequently, but ten years later we both found ourselves in Melbourne, sharing an interest in Wittgenstein, the content, form and style of poetry as well as the material, aesthetic qualities of the book.

Robert Wood: Can you detail for me a little about how you came to poetry? What were the circumstances that led to you becoming a poet?

Alan Loney: It was not from reading. I have no memory of childhood stories, was only read to at school, and did not read at all until my early 20s when I met my first teacher in poetry, George South. George was firmly in the British poetry tradition thru Shakespeare, the Elizabethans and Keats into Robert Graves, Laura Riding, R S Thomas, Alun Lewis, Norman Cameron, Edwin Muir, Walter de la Mare and others with a strong interest also in Rilke and Holderlin. Mind you, as a child, I liked books, I liked the thing the book was, the object, and liked to receive books at Xmas and birthdays, but I was never able to read a book, could not follow a story or narrative, and to this day I would be surprised if I had read any more than ten novels in my life. Beside George’s example, I also found Babette Deutsch’s Poetry Handbook – a glossary of poetic terms with descriptions of every kind of traditional stanza form, and from these I practiced over the next seven years sestinas, villanelles, ballads and ballades, sonnets, a pantoum or two – none of them exist now, but I do still have a small group of poems written in 1965 and which I had given to my then partner Jancis Taylor. On another hand, the first poems I read that really interested me were not English poems, but Chinese and Greek : Arthur Waley’s translations, especially of Han Shan, the Tao te Ching, Mary Barnard’s Sappho, Guy Davenport’s Archilochos and Kathleen Freeman’s translations of the pre-Socratic philosophers, all of which I still read. But George’s influence spread even wider – thru him I began to read Heidegger and the great classics scholar Jane Ellen Harrison.

RW: In your early days you were heavily influenced by Charles Olson, but Bob Creeley was also another significant influence – can you describe a little of how America as an idea, as a body of work, as specific poets, came to be important for you?

AL: During the early 1970s, I discovered an anthology titled Naked Poetry, Recent American Poetry in Open Forms, edited by Robert Mezey and Stephen Berg. This book was the first ‘opening’ if you like, a glimpse at something outside the specifically British work I had been reading with George South. It helped to open ‘doors of perception’ as to the possibilities for poems that I had been unaware of before. But the big event came at the end of 197o, when I had moved to Dunedin, found myself in the company of other poets for the first time, and picked up, in the University Bookshop, a copy of Charles Olson’s The Maximus Poems in the Cape Goliard edition. By then, Olson had been dead for a year, I had never heard of him before (tho other New Zealand poets had, and some years earlier), and I was still reading the book in the shop an hour later. This book, this poet, changed everything for me. For some time I had had difficulty, with the resources of the British tradition, in coping on the page with what was coming to mind in the process of writing. Not being all that hooked on narrative can allow material to come to you from various sources & directions that are not bound by the normal requirements of ‘subject matter’. Olson’s writing, the technical resources he brought to bear on it (multiple margins, open parentheses, the page itself as a place where almost any word or cluster of words could be placed anywhere, its spatial relationships acting somewhat as a musical score telling one what to sound & when, with gaps, etc), provided previously unknown (to me) techniques that allowed whatever came to mind during writing to take its place in the body of the poem, matching the body of the event of writing. I learned quickly then that, whatever else the notion of ‘integrity’ might mean in relation to the poem, any poem, one of its essential components was the integrity of the act of writing itself – not just what ended up on the page, but the very process of what was happening in the act of putting words on the page. The immediate result in my work was my first published book, The Bare Remembrance, printed letterpress by Trevor Reeves at Caveman Press, Dunedin 1971. And of course, Olson led me straight to Creeley, Robert Duncan, Denise Levertov, Edward Dorn, and some time later, Louis Zukofsky & the wonderful George Oppen. I had no idea at this point, that in 1976 Creeley would come to New Zealand, I would meet him, we would become friends, and that I as printer would print the small book, Hello, that he wrote on his New Zealand travels at that time.

By now, my involvement with the British tradition was almost over – I was increasingly alert to keeping iambic pentameter & other recognisable rhythmic patterns as much out of the work as possible, and where I spotted or heard it in the line, I changed the line. In The Bare Remembrance I was concerned to marry up a sense both of actual speech and the rhythms of the kind of jazz I listened to and liked to play. Whether it was called ‘progressive jazz’ or Be-Bop, the incredible complexity (not that I make any claim to match it) of the music of Dizzy Gillespie, Charlie Parker, Max Roach, Charles Mingus, Bud Powell, I first heard this music when I was 17 (1957), meant I could not at all understand what all the fuss around rock and pop music was about. This is still the case. When I joined the University Jazz Group (tho those capital letters make it seem more formal than it was) I found myself in the company, not only of jazz musicians who could really play, but who also (many of them) sang the complex polyphony of Palestrina, Vittoria, Gesualdo, Gabrielli in St Mary of the Angels choir, run by a sort of genius named Maxwell Furnie. As well, the pianist John Charles (who later wrote movie music) introduced me to another tradition, from Arnold Schoenberg, Alban Berg, Anton von Webern and Igor Stravinsky, and again, just about my whole approach to music was formed in that period from 1957 to 1962. The first concert I ever went to, of any music whatever, took place in 1961, in the Wellington Town Hall, and was Stravinsky Conducting Stravinsky. Not the British tradition, but European; not British music but American; not popular music but avant garde. Meanwhile, the mainstream of New Zealand poetry was still determinedly British, and based on the poets of the thirties: W H Auden, Stephen Spender, Louis MacNiece and C Day-Lewis, a situation which I believe had and still has its echoes in Australia.

RW: I’ve discussed your work and shared recordings of your reading (particularly at Penn) with others, and people often comment on your carefully modulated voice – it is not propulsive or maximal, which is quite different from how you started out under the Olsonian star. Could you periodise your writing – when did you find this voice, what led to it and how would you situate it in regards to ideas of a lyrical voice?

AL: Ah, the poet’s voice, what a problematic thing this has become. Many poets have attested to being told by someone who has just heard them read that, in contrast to seeing the poems on the page, hearing the poet’s voice reading ‘made the poetry come alive’. I think this is a statement no one should doubt. On another hand, I’m not sure it’s a statement that should have its face value decided too quickly. First, what is ‘alive’ in the reading is the person reading – movement, gesture, emphasis all contribute to the liveliness of any exchange. It’s not my business to interpret the poem for others – that’s their job. My job is to read the words as simply, as neutrally, as naturally as possible, and allow the hearer to make what they can of the poem without me getting in the way and telling them how to respond. If it means people have to listen a bit harder, then so be it. Yet paradoxically, I have many times been thanked for my way of reading because it seemed to allow the poem to be heard instead of the poet. In this sense one might become more interested in a notion of the voice of the poem, rather than the voice of the poet. Which sounds, you know, kind of, nice, but it’s not true, there is no such animal – we speak, poems do not. The voice IN the poem is alwaysand only the voice of the one who is reading it. The poem is given, by the poet, to the community, and that community voices it or not as it decides. The notion that the poet’s voice, the poet’s rendering, the poet’s interpretation is in any way definitive for the poem is false. Deliver the poem, audibly, to others, as a gift, for them to voice, and then get out of the way.

Pages: 1 2 3
This entry was posted in INTERVIEWS and tagged Alan Loney, Charles Olson, Max Gimblett, Robert Creeley, Robert Wood. Bookmark the permalink.
Robert Wood grew up in Western Australia. He has interned for Overland, worked for Australian Poetry, edited for Peril and Cordite Poetry Review, been a columnist for Cultural Weekly and is on the faculty of The School of Life. He is the author of History & The Poet and Concerning A Farm.