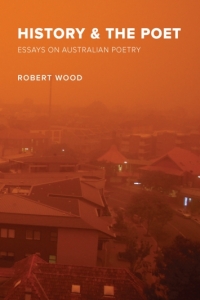 History and the Poet by Robert Wood
Australian Scholarly Publishing, 2017

Although Robert Wood’s History and the Poet is described as essay, it defies being labelled as one genre. Perhaps like the definition of poetry itself, which shifts and changes between individuals and contexts, language and culture, so do Wood’s words. With sincerity and curiosity, Wood invites the reader into a personal journey, asking us at the start: What is Australia? What is poetry? and What is poetry in Australia? In search of answers, what follows is heartfelt discourse; meditations, manifestoes, letters, mythical stories and, at times, academic hyperbole that is steeped in the author’s philosophical, poetic and political relationship with the natural world and its languages.

Wood’s work is a terrific survey, a wordy appraisal of Australian poets past and present. It is refreshing to read a collection of essays from a practicing poet that celebrates his contemporaries like Omar Sakr, Clare Nasher and Michael Farrell. This inclusion of emerging poets – a category within which Wood places himself, ‘taking language from all over to make its nest’ – suggests that poets are investigating their histories, the derivations of languages, the richness of land in multi-dimensional ways. And yet, Wood calls poets to look further, deeper into their histories as denizens of this land.

The chapter titles are often ambiguous and the essays follow the patterns of someone thinking aloud rather than chronologically. Wood’s subjects include whiteness in the Australian poetry bureaucracy, the epic, poet laureates, crayfish, genius and money. All essays are written with care and honesty yet the shortness of each piece results in skin-deep research. By the book’s close one is left feeling a sparky, interesting conversation has been had rather than an intellectual and provocative reading experience. The audience of poets that thrive outside the academic arena may not venture further than the title History and The Poet, accompanied by an image of introspective suburban architecture. Meanwhile, poets in the academic space may find books such as Philip Mead’s superlative Networked Language cover much of the same territory as Wood but with finer articulation and razor-sharp perceptions. Still, Wood’s voice is earnest and energetic and anyone who cares about poetry will find something to appreciate.

Wood’s many questions, assertions and experiments with ideas are infectious. Fellow critics and essayists could be inspired by his attempt to reframe academic writing. For example, he intersperses satirical pieces that break up some of the critical posturing with ironic playfulness. Although the satire won’t bring about social change, it reminds us how comedy can expose our own foolishness and the limits of scholarly prose. In these sections, Wood includes an epistle, flashbacks to childhood reading lists and personal reflections on his own identity. In doing so, he gives the collection a warmth and friendliness that almost compensates for more abstruse expressions: ‘The fetish for the search of influence as answers. And hence originality as an anti-mimicry that privileges an ur rupture, fails as common sense Socratic imperative’.

When not being inscrutable, Wood’s writings are a courageous attempt to reframe how we read and write essays, they are attempts to create a new scholarship of poetics by addressing our history as Australians living on this continent, country or nation. Wood’s poetics are a poetics of the body, the bones and the cells as they connect to and flow on from the history in the earth – be it the earth of Tagore, Robbie Burns, or Wood’s own feet on Western Australian desert. At its best, his writing aims to be evocative and musical: ‘I know that my country home is Redgate. Here are the crayfish, abalone, herring; white belly frogs, black and red cockatoos, skinks; loam, limesetone, karri and cave.’

History and the Poet brings to our attention aspects of poetry or writing about poetry that may otherwise sit below the surface. In ‘New Mimicry’, Wood critiques the accent that many Australian poets use when they perform, noting that ‘today’s young Australian poets sound positively Yankee’ while his friend visiting from the US remarks that ‘They all sounded like they were from the Mid-West, that kind of newsreader voice, not as serious but still.’ Wood proffers we need to be active listeners on the lookout for imitation in all parts of poetry and in ourselves, too, if we are to make sense in and of the world. In ‘Reading Performance’, Wood attempts a discourse around performance poetry and questions why there are no critical reviews of readings, performances or talks. Working through various lenses (a sociologist, an economist, a poet) the piece ends with a surprise phrase, more disconcerting than illuminating: ‘That is why a reading is not best described in the metaphor of the market. It is all invisible hands in the poetry world and reading is simply a magic trick that pulls the rabbits from the hat that was never seen to begin with.’ This is a statement that snares the reader in a rhetorical trap, which seemingly fails to progress the questions at the core of this collection: What is poetry?

Wood encourages us to find poetry in the everyday, to inhabit poetry as a language of performance, to see poetry as ‘noticeable asides’. Throughout the book, one senses Wood is lost in wonder at the possibilities of what poetry is or what a poet can be. Potentially this is anything and everything, if we reframe how we think about language. There is always poetry in our daily lives and this, he asserts, is what poets can do: expose this everyday poetics and enable us to time-travel, to see the world anew without ever leaving the lounge.

Most meaningful in the collection is Wood’s call to all of us to learn Indigenous languages. ‘It isn’t just the cult of forgetfulness but dismissal of that which is actually difficult’, he writes, explaining why this learning hasn’t happened. Wood acknowledges there are difficulties to this engagement, such as the necessity of of cultural protocols and the ‘complicated and confusing legacy of new settlement governmentality’. This seems a rather polite way of acknowledging that the actual loss of Indigenous languages are rooted in colonisation and racist policies of assimilation. In the piece, ‘You Must Let Go of the Anger in May’, he asserts that ‘No poet working in Australia today has realised the potential of the available linguistic material’ in the country, which almost suggests Wood is that poet. However, it may be that the task is impossible for any singular poet, and that many poets whom Wood cites are exploring their own languages and linguistic heritage – Ali Cobby Eckermann and Jeanine Leane, for example. If one looks at the contemporary landscape of poets and poetry producers and publishers in Australia it seems that many are creating and promoting work that reflects the exciting multiplicity of voices and histories.

Pages: 1 2
This entry was posted in BOOK REVIEWS and tagged Johanna Featherstone, Robert Wood. Bookmark the permalink.
Johanna Featherstone established The Red Room Company in 2003. Her poetry has featured in journals such as Quadrant and the Best Australian Poems. In 2006 she created a series of literary TV shows, The Wordshed, in partnership with The University of Western Sydney where she is a research associate. She is an honorary associate of The University of Sydney's School of Letters, Arts and Media. Johanna received a fellowship from the St James Ethics Center in 2008. Her chapbook Felt was released in 2010 by Vagabond Press.