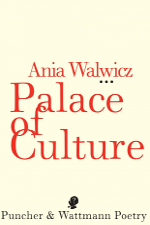 The Palace of Culture by Ania Walwicz
Puncher & Wattmann, 2013

Ania Walwicz’s first book in more than twenty years, Palace of Culture, confirms her reputation as one of Australia’s leading conceptual poets. It consists of fifty (almost) prose poems, each between two and five pages length. The poems use the suggestion of narratives as a key organising principle. But suggestion is as far as any of the narratives get. Characters, places and events all seem about to emerge but Palace of Culture is a sublime work of disruption in which almost every word, phrase and line is designed to both suggest meaning and to disrupt it. In fact even the act of reading, which the poetics seem to infer as straightforward, is constantly interrupted.

Poems with titles like ‘prince’, ‘leave’ and ‘see’ use the title words as the building blocks of narratives; however, constant disruptions render those narratives illusory and fleeting. Using derivatives and variations of words, the poems spiral off in new directions. They seem connected to what has been written before, and after, but exist almost entirely independent of context. She describes the process in ‘The language of desire’:

The stanza − one of the only independent stanzas in the book − concludes: ‘a vortex of language constantly/ spins and rolls over itself…’. While poetry ‘without focus or centre’ is commonplace, Palace of Culture is marked by the ever present coquettish suggestion of a centre, lingering as ‘desire that remains unfulfilled’. The poem’s subjects hint at ‘a real objective’, but they are ‘a delirium’ marked by continual disappearance and return.

Take ‘little girl’ which begins: ‘she serves a shop’. The ambiguity is already present in the verb. Is she serving the shop or customers? ‘she’ transforms, almost immediately into ‘a dirty little girl’ then ‘a fruit girl’ before evolving into a tongue twister (‘she sells sea shells’). Four versions of the subject in the first five lines, or they could be four entirely separate subjects. The poems never clarify, instead it is the process of suggestion and disruption that drives the poems forward. The poem continues:

In that excerpt, the ‘dirty girl’ becomes a ‘nasty little girl’ complete with the suggestion of sexual innuendo implicit in the corruption of the school yard dare: ‘I show her hers she shows me little’. Notice the word ‘little’ reappears, presaging the return of the ‘little girl’ now ‘with pig tails’. The excerpt also includes a narrator, though the I shifts between cases, highlighting its instability. This is how the poems in Palace of Culture work. Subjects suggest future phrases which then, in turn, mutate into new subjects, before sometimes returning to language used earlier in the poem. The simple descriptiveness (i.e. ‘she serves a shop’) is constantly undermined by the subject’s mutation into other, albeit seemingly related, forms.

Setting aside the way Walwicz deals with narrative, the poetics of her work are well worth reflecting on. In particular, I’d like to comment on the speed of the poems. They appear breathless. Devoid of punctuation to give guidance or pause to the run on lines, the reader is tempted to fly across poems that consist almost entirely of monosyllabic words. Repetition and assonance invite the reader to step on pedal that much harder. But like Admiral Ackbar says ‘It’s a trap.’ As Walwicz has said in an interview: ‘I don’t aim for easy entertainment. I aim for something that would actually be a challenge to read.’ These poems are actually, on the most basic level, a challenge to read.

Walwicz employs a range of tropes to disrupt reading. For instance, frequent intentional typos and misspellings require the reader to pause to correct or to choose between words. Consider the following from ‘dress’: ‘aks’, ‘frrom’, ‘quiedt’, and ‘wirth’. ‘aks’ could simply be the common corruption of ‘ask’ and ‘quiedt’ and ‘frrom’ the result of clumsy thumbs; however, ‘wirth’ is something else altogether. It could be a German surname but that’s unlikely. Instead it can be read as either ‘worth’ or ‘with’ though not both; but, contextually they both fit. Witness: ‘and I remember said dress sews now/ wirth cotton lip cotton said sew’. Is the dress ‘worth’ cotton or is it being sewn ‘with’ cotton?

Neither is certain. The reader has to pause and choose. This is an almost physical disruption of reading that slows the reader down in a poem that seems to invite speed reading. These disruptions are employed on almost every line of the book making for a stuttering reading mimicking the narrative disjunctions of the poems.

There is much more to be said about Palace of Culture. It is a big book built on, one assumes, many years of writing and reflection. For instance I haven’t touched on the sound of the poetry. With its repetition, half and full rhymes, alliteration and assonance, fragments of songs, onomatopoeia and baby words, it is a book that demands to be read aloud and Walwicz certainly has a reputation as a reader. If there was ever a book to come packaged with a CD perhaps it is this one. Ultimately the collection’s most striking feature is its density. Reading the book closely is to fall headlong into a ball pit of puzzles, jokes, choices, dead ends and almost answers to half posed questions. This is what makes it such a rewarding read. The method of suggestion and disruption, that define the book, is never fixed. Instead Walwicz continually finds new ways to subvert the reading process and challenge the reader.

This entry was posted in BOOK REVIEWS and tagged Ania Walwicz, liam ferney. Bookmark the permalink.
Liam Ferney's most recent collection Hot Take (Hunter Publishing) was shortlisted for the Judith Wright Calanthe Award. His previous volumes include Content (Hunter Publishing) and Boom (Grande Parade Poets). He is a public affairs manager, poet and aspiring left-back living in Brisbane with his wife and daughter.