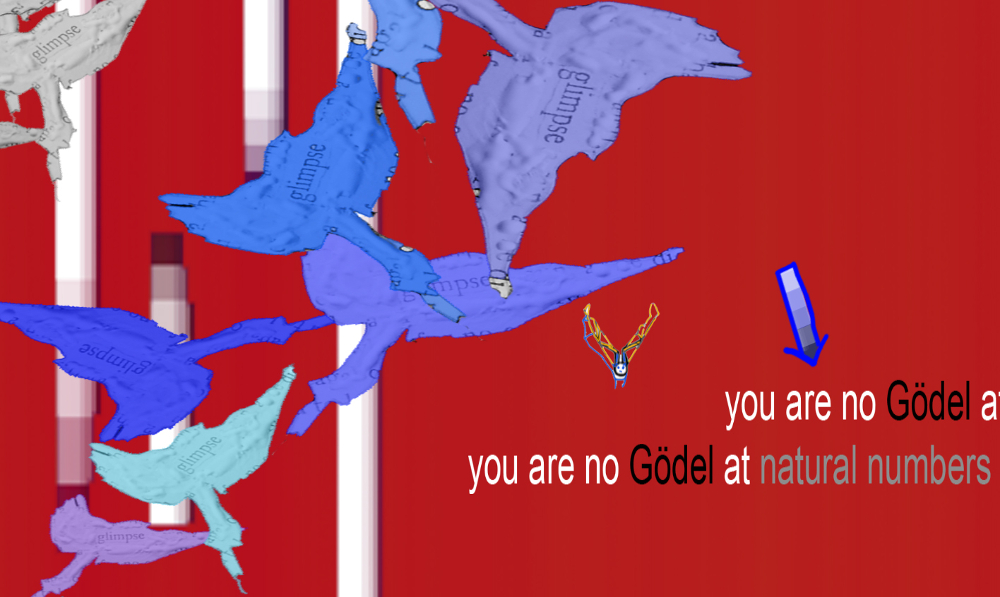 I am now almost thirty years old. While there were many different gaming consoles around when I was a kid, I wasn’t privy to many of them. I was a fairly active child and teenager who spent most of her spare time outdoors (usually wandering around parks aimlessly). My education did not involve classroom computers, however I did have access to one at home. From this I learnt the basics of computer symbols. Up, down, left, right, backspace, control, alt, delete, spacebar, and later in the PC’s development, the mouse-click. So, while I was not involved in a rich digital culture as much as children and teenagers are today, I would attest that not much needs to be known about a computer to make the basics work.

With this in mind, consider the term ‘digital literature’. This is a slippery term that takes on many forms, but generally I use it to think of digitally produced writing that also includes some form of interactivity for the reader. Writers were, for many years, trying to find ways to remove the book from the page – to give their words flight and freedom. The postmodernists, in particular, championed this by attempting to create written stories that were not held to the confines of the book. They were attempting to create stories that could be read differently depending on the reader. But they were still largely confined to text on a page, or clumsy convergence. The era of the digital, and namely, the Internet, brought with it the promise of an easy solution – text, images, sound, video, and choose-your-own-adventure style interactivity, easily contained within the one document, and easily publishable. This was seen in the hypertextual adventures of Net writing in the 1990s. But Internet literature quickly grew with the software, and now we see examples such as generative writing, and narrative games, that are perhaps digital culture’s best examples of multimodal literacy that considers visual art as a language. We’re also seeing more downloadable alternatives to the browser-based model, as the world of the application grows. A user can download your story or poetry piece to their phone, or touchscreen tablet computer, and interact with your words using new forms of feedback: touching, swiping, hands-free gestures. Further, their devices allow them to interact with your story not just through touching the screen, but through a range of sensors including accelerometer and vibration, where the world of physical computing, and the world of literature, overlap.

This newfound rush in Western societies towards touch devices and other haptic feedback devices (such as new forms of virtual reality) has played a bit of havoc with Internet literature, due to some fairly boring technicalities that I won’t go into. But it is forcing writers of digital works to further rethink their approach to ‘text’, by asking them to become even further aware of the interactivity between text and user, and asking them to develop a further awareness of multimodal literacy. As Barthes perhaps predicted, the story now has to consider the reader more than ever, and consider not just the reader’s imagination, but their entire body, their perception of space, and their location within it.

This opens up a myriad of possibilities for writers to not only collaborate with artists and technicians from other disciplines, but it allows for writers, themselves, to become more multi-disciplinary in their approach. The digital writer is not just creating words, they are creating visual art, sound, and moving imagery. They are intrinsically involved in the information technologies and software use, creation, and breaking. They become the modern day renaissance people. In this way, it may be so that the medium truly is the message, as the media used can drive the user’s experience, but meaningful and entertaining digital stories come from the author’s ability to embrace this as part of their process, rather than rejecting it.

We formulate our understanding of the world through our senses, and thus our ability to sense the world is generally an amalgamation of the visual, aural, haptic, vestibular, and the chemical senses. We also learn through exploration; through experimentation and adventure. This might suggest that multimodal literacy is something that humans can understand intrinsically. It also suggests that the process of exploring an interactive world, as a form of narrative play, is beneficial not just to our education, but our continuing growth and ability to create neurological connections.

So … if current forms of digital literature can wrap this up so easily via digital games and artistic narratives, why is it that a large percentage of paper book readers (which is still the majority of fiction readers in general) tend to find them difficult to interact with? The thing about most digital writing is that there’s no right or wrong answer as to how to read it – you’re invited to play and explore and attempt to break it as much as you wish. Press everything! Touch everything! Swipe everything! Type anything! You are in charge of the interaction.

Yet I still see some users of my work approach it as if they were attempting their very first mouse dissection. They fear touching the wrong thing, or sending the main character in the wrong direction, despite the fact that I want them to do both of these things. Sometimes they ask me what they’re meant to do with the story, as if the most important part of the interaction was finding the end, as if the traditional bounds of linear writing are still too sacred to be challenged. Thus, I notice that many digital writers, including myself, tend to include a great deal of instructions with their work. The ‘how to’ guide becomes one of the very first pages. The narrative itself tends to end up intertwingled with reading directions as strange footnotes and epitexts. Large arrows are created to point to buttons that can be pressed, or to point the user in the direction in which they could potentially take the main character. The art and the interface become loaded with instructional symbolism, as the author attempts to create work for the beginner and advanced computer user, alike.

This weaving of art and instruction is beginning to form a major part of some digital literature works, as it can’t help but be a part of the multimodality. For example, in Figures 1-4, stills from my poetry game app ‘An Argument in Parallel Incompleteness’, you can see the interactive arrows forming part of the visuals from the first scene, all the way through to the end page. 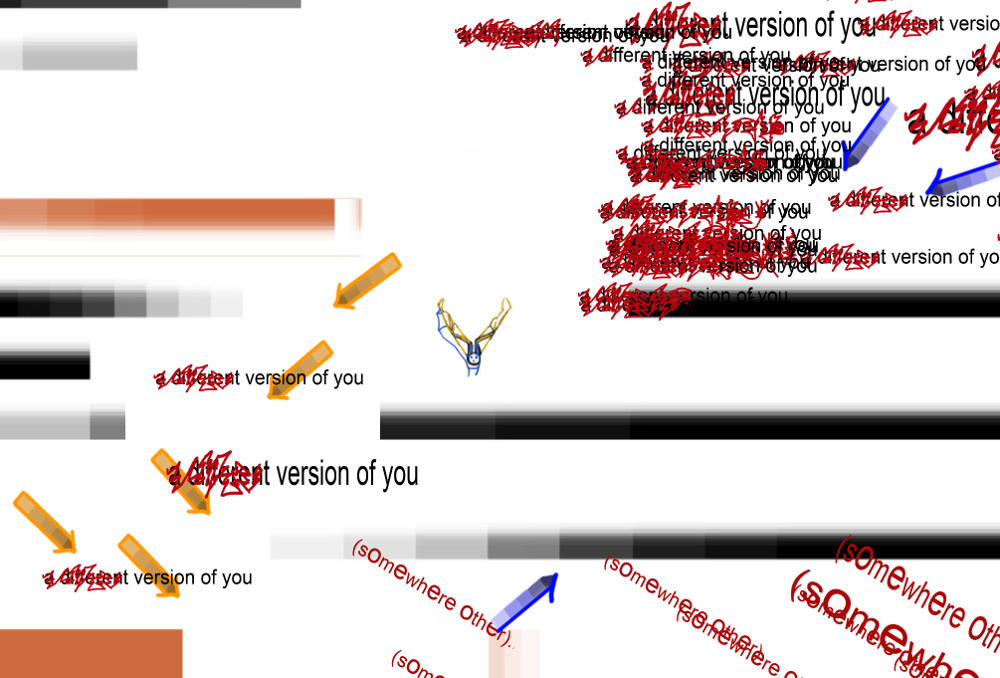 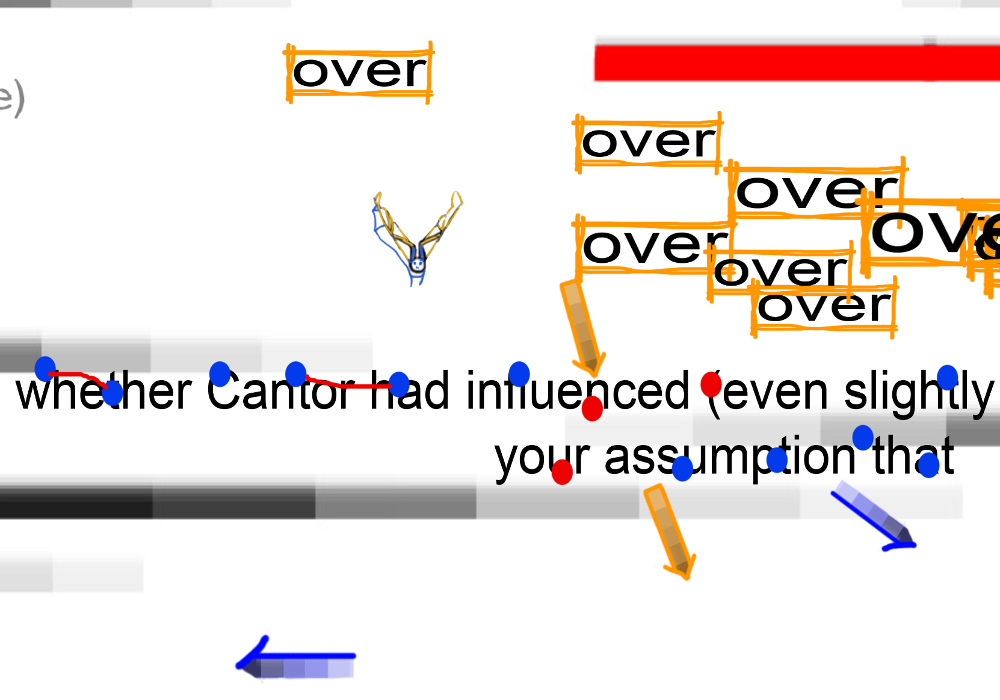 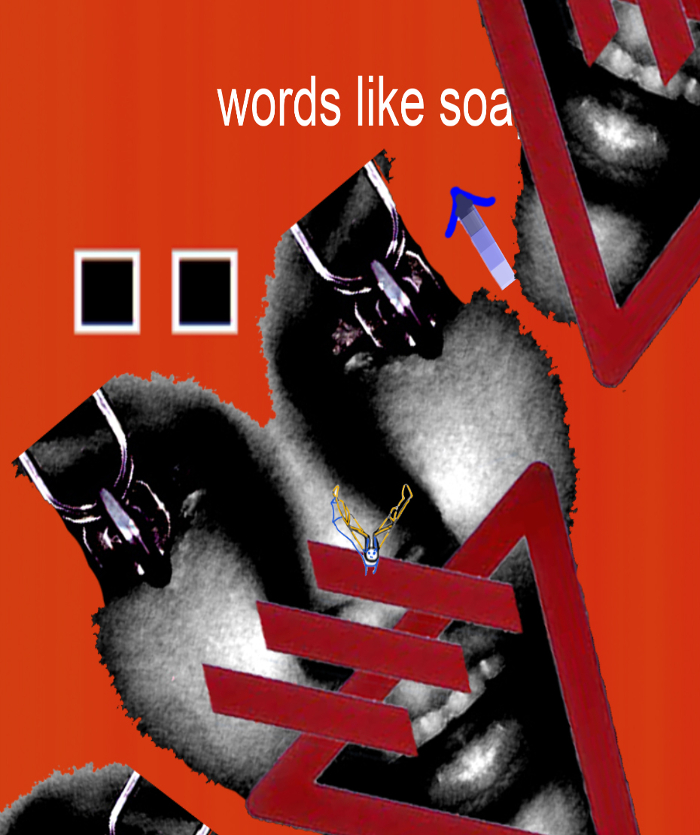 In Figures 5-7, stills from Jason Nelson’s ‘Arcticacre’, and ‘Evidence of Everything Exploding’, the messy arrows are an intrinsic part of the hand-drawn aesthetic, and form the bulk of the hand-drawn artwork. Perhaps it is inevitable, thus, that visual instruction becomes one of the main drivers of digital writing’s visual aesthetic (but I, for one, hope this won’t be the case forever). 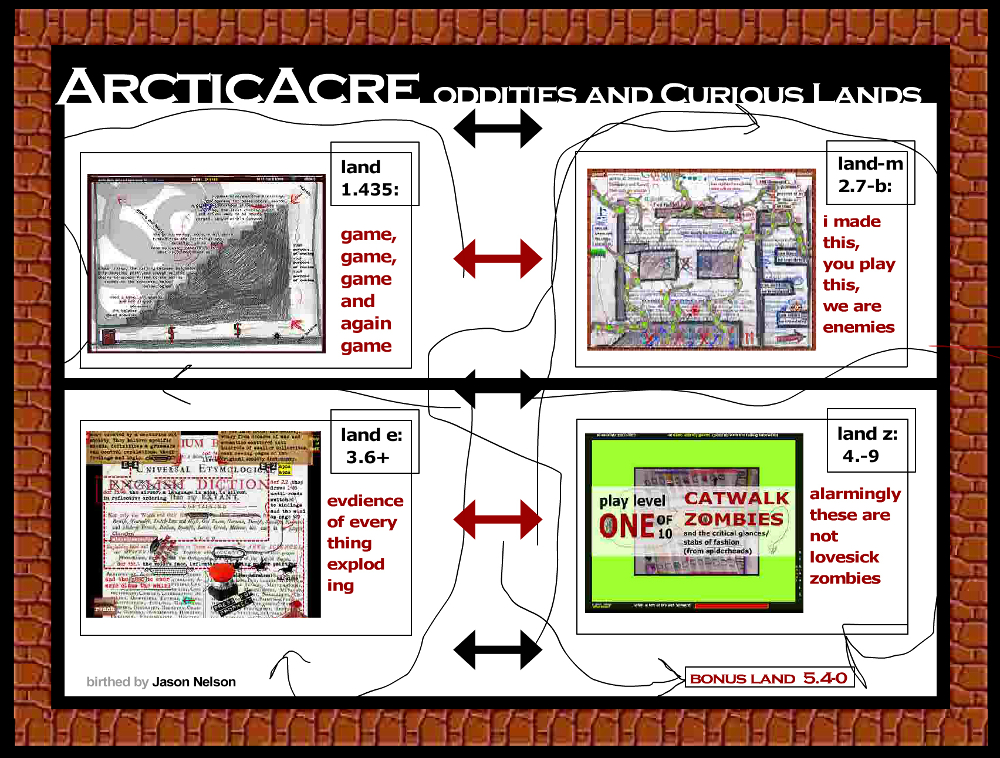 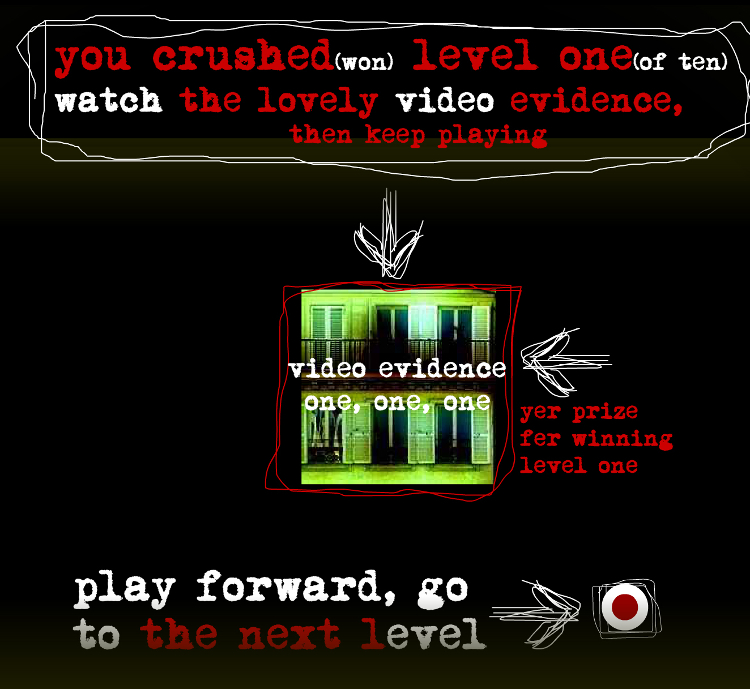 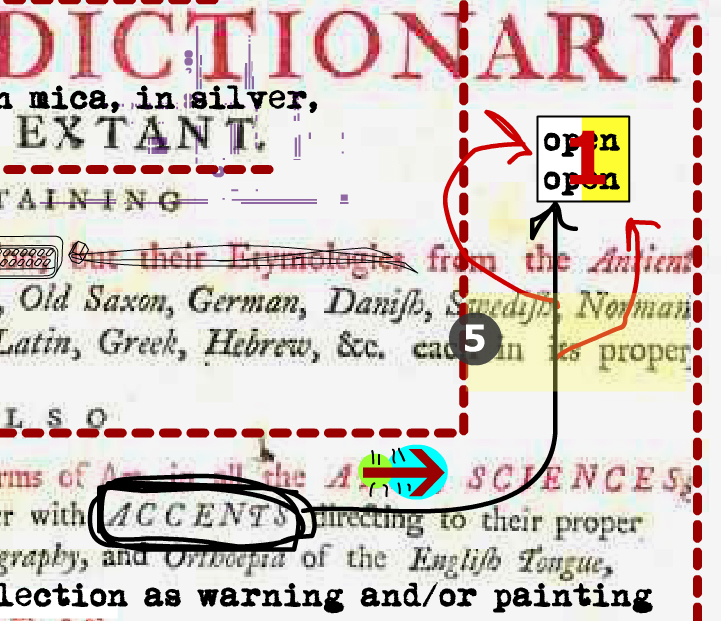 This is a sign of our times – our in between stage of half analogue half digital, where the world has computer users with a wide digital skill discrepancy. Of course there’s nothing wrong with narrative that becomes a kind of metatextual user-guide, but it is my hope that digital literature can move beyond this in order to place more emphasis on the narrative itself, beyond the directions. This direction-as-art has caused a symbiotic relationship between reader and writer, where the writer remains acutely aware of the widening gap in readership styles dependent on the reader’s understanding of the content delivery. If we want to see digital literature pushing boundaries further, and experimenting further with other ways of reading, then the readers themselves need to update their digital reading skills.

If you think your digital literature literacy might not be up to speed, there is one easy thing you can do to nourish your multimodal skills … Play more. Download some digital games – even simple ones, and be prepared to explore. What the world of digital literature really needs, are more explorers.

This entry was posted in GUNCOTTON and tagged Alinta Krauth, Jason Nelson. Bookmark the permalink.
Alinta Krauth is a digital poet, projection artist, sound artist, and games designer, with a keen interest in environmental and political issues. She is interested in ways to tie sustainability and ecological education into large-scale interactive pieces, as seen in her recently exhibited work ‘Little Boxes’ at Luxlumin Festival. Her exhibited works explore poetry games, sound poetry, interactive sound art, interactive Net art, and projection mapping onto sculpture. She has had her interactive digital art-poetry exhibited globally from Brisbane to New York, Virginia to Vienna.