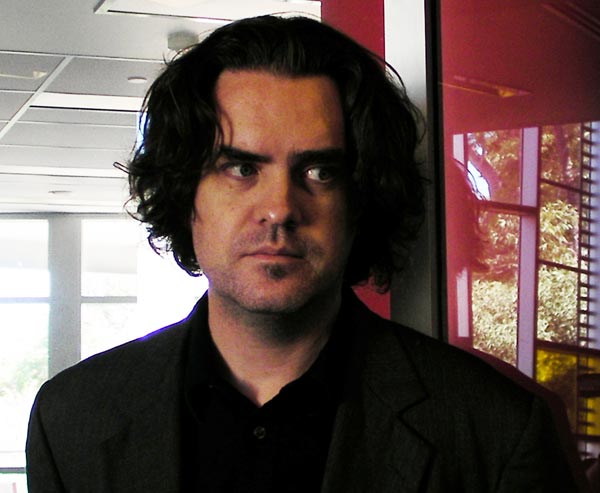 We’ve published three new media pieces by Jason Nelson in our Electronica issue, and what better reason could we have for interviewing Jason, long-distance, about his creative practice? Read on for a glimpse into the mind of a pioneer of electronic literature.

To begin our conversation about your digital poetry, can you recall a story that might help explain your approach to creating?

Shortly before one of my first digital poetry readings/talks at the University of Maryland, I was asked, during a pre-dinner, to describe how I generated ideas for my digital poems. Initially, I stormed into a discussion about not being satisfied with the limitations of print, and the need to find a format that satiated a curious and scattered mind. And while those points are entirely valid and contribute to my creative process/direction, they didn’t really answer the question of where the kernel, the initial spark for each digital poem lives. I stumbled through half-jokes and comments about the food and weather, until someone across from me said they loved my interfaces. At the time I hadn’t really, formally, considered the idea of an interface, the notion that digital poems have an engine, an architecture that structurally, thematically, cultural surrounds the poem, holds the poem, shelters and nurtures and indeed conceives (procreation digitally) the poem.

Later after the reading/talk, the topic of “where are my digital poems born” came up again. And with the aid of a few drinks and the pressures of “big crowd talk” past, I raised my voice and commanded (rather dramatically) “look around at the bar”. With my half-drunk audience now confused, I continued. “Everything around us has an organization, a geography, a pattern, an interface”, I uttered. I pointed out how poems could be formed from the way drinking glasses stack on the bar top, or how the pool tables and their coloured and sequential billiard balls are an interactive and generative poem. Soon we began playing games, creating new digital poems from what we saw (and heard) around us at the bar. There were sound poems created from the mixing of conversations and music, game poems from the pinball machine, self-destroying poems from the way alcohol slid us deeper into one-dimensional thought. For that evening at least, the world, like a movie’s representation of the idiot savant mathematician, was filled with numbers and equations floating above everything on the screen. And instead of digits, interactive texts were the filter and footnotes to our sensory experiences. 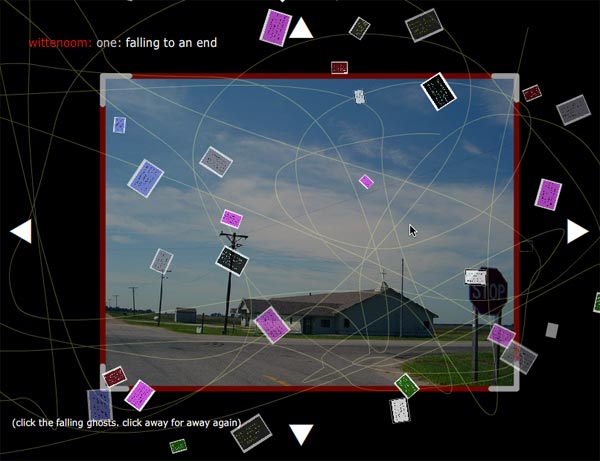 While that sounds romantically alluring, it’s a soft and elusive explanation, can you screw your answer to the floor and describe your approach to interface as a poetic device?

It is overly simplistic to state digital poems come entirely from building/discovering interfaces. Any artist’s creative practice is a merging/melding mix of fluid events and inspirations. But within many digital poems there is one commonality, the emphasis on interface. Rarely do I even reuse interfaces, and when I do it is only as one section of a larger work. This continual drive to create new ways to rethink the structure, organization and interactive functionality of my digital poems comes from a variety of internal influences. Most importantly is how these interfaces are not just vessels for content, they are poems in themselves. In the same way digital poetry might be best defined by the experience, rather than a description. Or similar to a digital poet and their works being described by the events and stories surrounding the creation and building process, an interface is the life, the body, and a poetic construction in itself.

And what about the pre-digital age, how did poets deal with interface? Poetry has a long tradition of using the poetic form to drive, or serve as the engine, of the poem. Historically as new ideas, technologies and cultural trends arrived, poets used them as poetic interfaces. Digital poetry is simply an extension of that long history, using the various possibilities of the computer to build interfaces.

Is interactivity and interface a limiting factor to a digital poem?

In the purist sense of the word, yes, but then there has not been a computer or program designed that doesn’t operate on the limiting choices. As Scott Rettberg, founder of the ELO argues, “the link is inherently a constraint rather than a liberating device, is not however to say that the reader of any text, in print or electronic format, isn’t already “liberated.” He is drawing a distinction between the reader’s experience with and the composition of the digital poem. Every environment/machine/structure/poem ever created is governed to some extent by its uses of and reliance on limiting factors. I see those constraints as opportunities in the creating a digital poem, they are tools and techniques for engaging with the text/media and whatever audience comes along. 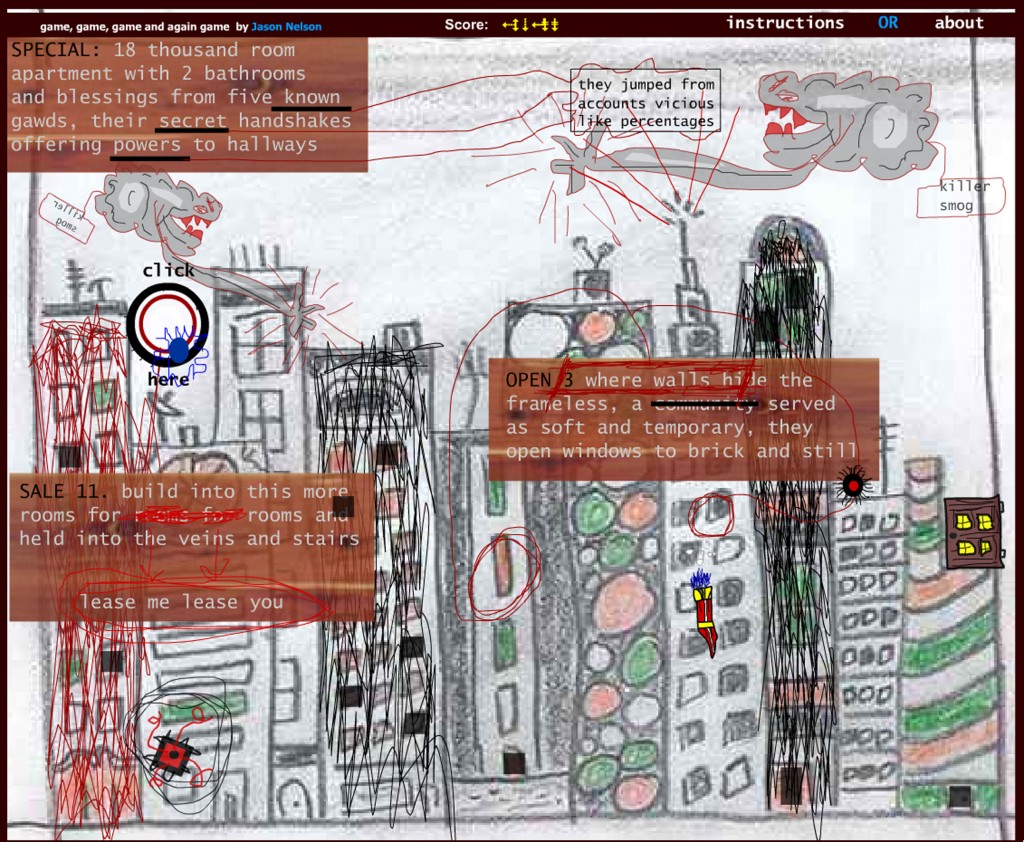 The most immediate, without thought, answer is yes. If you compared a hundred digital poems, you’d find such navigation elements as links, rollover hotspots are used near universally. And as for tools, html/javascript and Adobe Flash cover almost all works created in the past five years. If pressed, you could quickly list dozens of techniques and codes that might suggest a toolbox for digital poets. But what happens if you throw in all web pages? Aren’t those tools/techniques/tricks used for nearly all web creations? In MFA courses, both art and creative writing, we are taught certain techniques and tools to use. Things like enjambment, simile, hatching, stroke, drip, cadence are all part of the kitchen hardware drawer an artist/writer digs into when crafting something sweet and tasty. And initially it appears digital poets have a similar place to hide all the turning/breaking/adhering tools. A survey of digital poems common to university courses covering the field, reveals commonalities in how they use technology. And yet I am not convinced.

Digital poetry (literature) to a great extent is driven by what is possible with the technology and the poet’s ability or willingness to learn. The dominant tricks of a digital poet are generally the same dominant tricks as anyone else using that software/code. One might argue that it’s not the tools etc that are unique to digital poetry, but the way those tools are used. And to extend that, I could also add that ideally digital poet’s try to use the newest tools available, those not widely adopted by the rest of net users, or at the very least, good digital poetry tries to destroy and rebuild/repurpose those digital tools. Alan Sondheim, despite doing very little work with the dominant digital poetry tools of html and Flash, has been actively corrupting listprocs with his continual stream of exploratory texts. And Alan’s most recent work in Second Life has stretched digital poetry to the Avatar and the 3-dimensional/walk through virtual worlds. Alan is a good example of a digital poet who leap frogs technology. While it might appear he lags behind, having not jumped on to the build your own tools of advanced Flash, he has sought out other Web 2.0 and more community based tools for his digital poetry performances. Again, he, as so many other digital poets, are defined not by the technology, but by how they attempt to rethink it, to be forever reinventing the relationship between their creative selves and the electronic tools they use.

I know you’re reluctant to assign a meaning to your digital poems, and would rather people tackle it for themselves. But I am curious, with so much of 20th century pop and political history woven into your work, and with such an irreverent presentation, are your creations intended to be humorous? Satirical? Or disturbing?

The temptation, of course, like gliders off the slowest slopes, is to answer simply yes. Inherently, by design, by inference, by association, by any words, everything is absurd. History is built by the combination of circumstance and bravery, luck and control, all twisty-tied, plastic wrapped, a use by date of tomorrow.

Yes to the humorous, if only because that is the safest, easiest reaction to clever difference. And yes to satirical, because it is humor’s acid fingered sister/brother, bunk beds for margins of ten feet. And yes, yes to disturbing. I cannot imagine, well I can but I won’t, creating something that isn’t disturbing. In the strictest meaning, a disturbance is a mutation, an oxbow building bend in the river, walking slightly faster, with shoes not soled for inclement conditions.

And then, just now, at ten in the rainy evening, at a small table, a few yards from the street and the ocean, I realize my response is like my art, my games. A pretty barreling surface, hiding nonsense, that hides meaning, that hides some crap that sounds like a poorly written 19th century guide to spiritualism, or laughable sci-fi sage.

But, can I say, I am forever glad you caught those references, those soundy bits of talk and lost documents. Someone, with one of those self-referential email address names once wrote that I was not an architect. Had they included their address, I would have sent them 1970s Godzilla comics, issues 9-12. They are right after all, after all. I do not build weather tight buildings, with weather tight seals and doors that lead where doors go. I build awkward filters for what I see/read/hear, the graph paper diagrams of a man child scared of anything else. Strict meaning is for those who don’t pay attention. 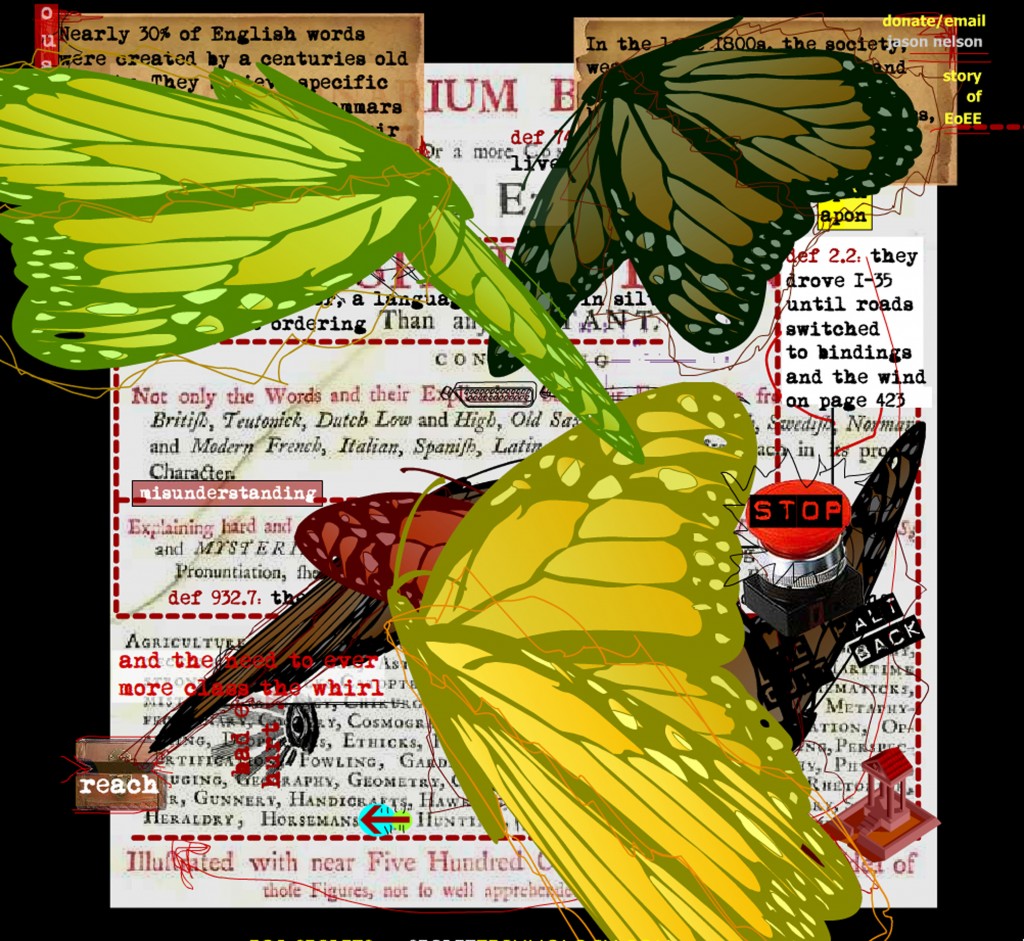 You’ve mentioned that the educational system teaches us to look for an exact meaning in every piece of art or poem. Don’t you also find that the web frowns on random things? Everything online has to be tagged, categorized and clearly presented. It’s hard to find things that are genuinely weird.

Strange isn’t it. Most, when stopped on the street, and strapped down for answers, would say the net is built on random and weird creations. And yet I agree with you entirely, or as entirely as agreement allows. Given the incredible, near unimaginable number of websites and pages and files, the sameness is alarming. I want to think it isn’t so much that people aren’t unique, and rather it’s fear and the need to, as you say, categorize, keeping us locked into samey, same, same, same.

I should add that I don’t personally see my work as weird or strange or odd. When creating, my intention is never to create anything that anyone would specifically call anything. That sentence is still confusing me many days later. If some kid, in some stadium hallway, asked me, as I walked out to the big game, to hit or block or throw or cry, “how can I, as some kid, make weird?”. My response: think of the first five things you would do then erase them. Think of the next five, fall asleep, wake up, write and send a letter (paper and pen) to your grandfather’s ghost, then as you walk home, notice the edges, those intersections of grass and concrete, wind and conversation, the self-forced line between what you want to imagine and the imagination you have.

This entry was posted in INTERVIEWS and tagged David Prater, Jason Nelson. Bookmark the permalink.