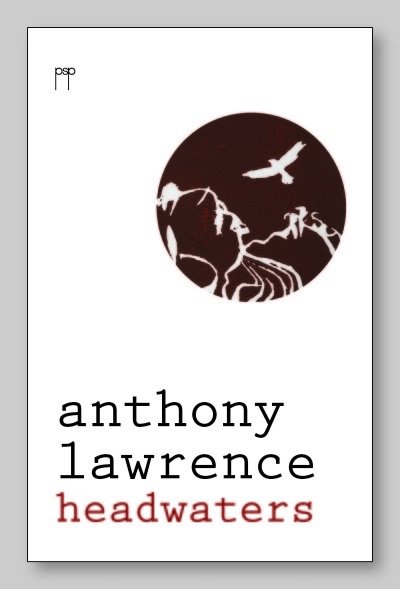 Headwaters is Anthony Lawrence’s fifteenth collection and his first with Pitt Street Poetry, whose website memorably suggests the humble reader should ‘Find yourself a shot glass, take a seat, and take a shot.’ This is the first time I’ve seen a publisher suggest their books be read thus, though in their defence, they do so in relation to lines from Lawrence’s ‘Wax Cathedral’. Ah well, when in Rome … a thimble of Lagavulin scotch as required and I’m finally ready to review. Non-drinkers may read on as they are.

Headwaters offers no great divergence from the impressive Signal Flare (Puncher & Wattman, 2013) or many prior works of note. It is recognisably ‘Lawrencian’: corporeal, tactile, connubial, self-reflexive, tenebrous, ecological, elegiac, transcendent, each flexing its own brand of toughness. ‘Connective Tissue’, which won the 2015 Newcastle Poetry Prize, is an early standout and the longest inclusion. Its six pages range from sickness to amazement at the body, seascapes and memory of country rugby games with ‘tough farm boys who made up / for a lack of finesse / with raw courage’. All are bound by the connective tissue which links poet and lover, honeyeater and flower, old man and young, walker and bird-printed sand. The opening poem of Headwaters, ‘My Darling Turns to Poetry at Night’, seems almost a prelude or epilogue to the subject matter of ‘Connective Tissue’, notably where ‘Her dreams have night vision, and in her sight / Our bodies leave a ghostprint where we’ve laid’, the double entendre of the last word a sly flicker of humour in the villanelle’s greater dance of abstraction and soft, imprinted skin.

‘The Deep’ is the poem I return to most. I’m typically (notoriously?) drawn to the marine, but in this case it is more the delicate, gradual rendering that makes this naked dive something more extraordinary:

The rest of the poem is just as spellbinding, peering through ‘photic and abyssal zones’ where a world-record-holding free diver haemorrhaged to death, a marker buoy ‘tending / to the rise and fall of its reflection / like a woman with her face in her hands’. Lawrence’s detailed, absorptive luminosity is reminiscent of Martin Harrison, a master of generous lyrical concentration. Both poets, of course, share modern American tastes, though to refine this further does neither justice other than to note that Headwaters takes its epigraph ‘With no less purpose than the swifts / that scrawl my name across the sky’ from New York poet and musician Michael Donaghy.

The final sequence ‘Bloodlines’ sees the poet return to his country roots with its mixture of modern pastoral (‘the quad bike has replaced the night horse’) and Ted Hughes-esque visceral starkness. The starkness of ‘In Extremis’ is of a different order. Explorer poems are often considered out of vogue, consigned to the mid-century (white) Australian search for national identity in Rosemary Dobson’s ‘The Ship of Ice’, Douglas Stewart’s ‘Worseley Enchanted’, Francis Webb’s ‘Leichhardt in Theatre’ and Eyre All Alone’, with subsequent Indigenous retorts, for example in Jack Davis’ ‘The Black Tracker’. Lawrence’s ‘In Extremis’ resurrects the explorer poem with its depiction of a starving Sir Douglas Mawson in Antarctica:

This is grand poetry without the pomposity, replaced instead by semi-survival and brute mammalian reality. I loathe ‘clean sheet’ reviews, but my harsher critical faculties can only peck at the edges here of the collection as a whole (does pseudo-ephedrine deserve a whole poem in ‘Medicine’?). The poems, as they should, correspond with one another. ‘Ghazal’, for example, serves as one geographic counterpoint to Mawson’s Antarctic solitude, the poet of his younger days alone in the red dust of Broken Hill, written into the present through the ancient Arabic form. Shifting sands, indeed.

Headwaters once again proves that Anthony Lawrence’s claim for a permanent place in Australian poetry stopped being a claim long ago. There’s little need to claim what you already are. Gravely, graciously, he’s just getting on with it.