Review Short: Mark Reid’s Looking out from Bashan: the republic of Og 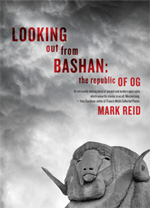 Looking out from Bashan: the republic of Og by Mark Reid
Fremantle Press, 2012

Mark Reid’s poetry has always delighted and challenged me. His distinctive voice and finely-tuned ear for just the right music has given his work a potency that’s been hard-won. Reid is a craftsman. His tight phrasing and impeccable sense of where to break a line give even his more narrative poems an intense lyrical presence – particularly evident in these marvellous new poems. Reid’s invocation of and ruminations on the biblical giant Og never resort to parody or impose themselves as alternatives to autobiography. It’s hard to pin these poems down, and that’s what makes them so fresh and compelling.

The first poem, ‘Entree’, announces the tone and mood for much of the book: a palpable restlessness inhabits the lines, and a sense of foreboding draws us in. We enter a place where the accessible physical world has been dovetailed into myth and legend. We are put on notice. The last lines work as both invitation and warning:

The second poem, ‘Chorus’, sets a pattern. The chorus poems are intermittent and set out as prose poems with lines being right-aligned. They create a list-and-commentary style to the book, and within the various chorus poems we find examples of one of Reid’s most enduring qualities: his ability to light a slow fuse inside a poem using internal slant rhymes. These words resonate deep into the pages that follow – pagan, affection, drawn, then, upon, young, turned, down, Bashan – and they appear lines, not words, apart. The effect is subliminal and spell-making.

Og delights equally on a conceptual and linguistic level, and Reid’s metaphors are often startling:

Most metaphors depend on our knowledge of the source material they were fashioned from. Bible stories, fairytales, nursery rhymes and border ballads have, at their core, layerings of historical fact. Mark Reid’s character Og has been defined in terms of his place in the Book of Numbers and Deuteronomy, yet that’s where the investigation ends. Reid’s imagination takes over, and whatever information the Old Testament has offered up has been reworked to have current, relevant implications for our time. Og’s personality (he is not portrayed in a detailed physical or psychological sense) can be seen as glimpses from our own lives through various rites of passage and common daily experience.

Birth: ‘When the midwives looked in they ran…’ and ‘She split like a thumb / & out he came.’

Childhood discovery: ‘That creek he fell into once / is today a concrete pipe under the road.’ and ‘He loved the stillness he could bring upon himself.’

Guilt: ‘Og confesses up his failure / every miserly gesture / in which he is caricatured.’

Following Og’s trail, filtered through Reid’s wide-ranging and luminous imagination, I’m reminded of what the poet and critic Stephen Burt calls Elliptical Poetry. Burt suggests that Ellipticists ‘admire disjunction and confrontation, yet they know how a little can go a long way. They seek the authority of the rebellious… violate decorum, surprise or explode assumptions about what belongs in a poem, or what matters in life, and they do so while meeting traditional lyrical goals…’.1 These poems seem to echo what Burt is suggesting. By using a central, mythical character, Reid has defined aspects of childhood, adolescence and adulthood without the burden of spot-welding experience to autobiography. This freedom of observation and engagement is evident in the way Reid has harnessed an unpredictable yet convincing lyrical tone throughout.

Og is not only a strange, moody, looming, opinionated figure, he is one who demands our attention, even if, at times, we have little or no idea what he’s trying to tell us. Understanding, on a critical level, is not always important. Reid knows that poetry can work its magic without linguistic ornamentation or nostalgia, and these beautifully-wrought poems say just enough, and do not outstay their welcome.

This entry was posted in BOOK REVIEWS and tagged Anthony Lawrence, Mark Reid. Bookmark the permalink.
Anthony Lawrence has published sixteen books of poems, the most recent being Headwaters (Pitt Street Poetry), which won the 2017 Prime Ministers Literary Award for Poetry. His books and individual poems have won many awards, including the Philip Hodgins Memorial Medal, the Blake Poetry Prize, and the Kenneth Slessor Award. He is a Senior lecturer at Griffith university where he teaches Creative Writing. He lives on Moreton Bay.