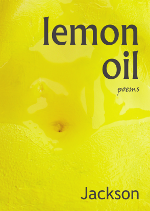 The final poem in Lemon Oil, titled ‘The right metaphor’, combines the thesis of independence with the antithesis of loneliness to synthesise a new metaphor for love. Love, Jackson tells us, is not a chain, a cage, or a leash, but a long elastic cord that lets us fly free yet binds us to each other, ensuring that ‘there’s always/ a way home’. This tension between two desires (one for freedom, the other for closeness) is emblematic of the book as a whole.

While the book seems to be told from the perspective of a single, first-person speaker, this speaker adopts multiple, often inconsistent views on a variety of topics. She desires to inhabit Suzanne Vega

but also wants to be a gay man.

She rolls her eyes at over-packaged ‘towel cakes’ in the post office and $5 toothbrushes in the grocery store, but spends hours on Facebook, surrounded by ads for

The contradictions often occur in the space of a single poem. She daydreams about growing old with her lover, but balks at the idea of marriage (‘the washing bit’); worries about big social issues, then goes home to write love poetry instead of protest songs (‘sex again’); cries over her ‘ironic breakfast’ of Just Right cereal, but cheers up an angry magpie by sharing a flake (‘wet feathered, sharp sharded’); stays out late with friends and lovers, only to get lonely on the long drive home (‘Someone’).

The book’s best moments weave these contradictions together into a beautiful, messy patchwork.

Jackson’s discussions of sexual desire for the male body are a particularly interesting mix of contradictory emotion. Her narrator aggressively ogles men on public transport

but is often reticent to make her move

Poems about the pain of rejection provide the key explanatory link. In ‘hungry’, a junk-food-loving boyfriend refuses the narrator’s homemade apple pie, while in ‘thin’, a casual partner leaves in the night, and the narrator tries to recover his memory by picking used condoms out of the trash.

These admissions of vulnerability and strangeness point to another of Jackson’s strengths: she is not afraid to look like a flower child, a pervert or a dork. She titles a poem ‘Fly free’ and begins it with ‘FLY FREE Beautiful Bird FLY FREE’; hits on Charles Bukowski and Dylan Thomas (who don’t call back) in ‘Dylan Thomas’ and ‘Platform 10/10/09’; and touches her friends in public, not caring what people think (‘for Coraline’). This openness makes for a few new-agey moments (in addition to ‘Fly free’, there’s a poem titled ‘Talk to me, brother moon’, complete with sentient trees and sister sun), but the benefits of risk-taking more than make up for the cost of a few gambles that don’t quite come off.

The poem titles in Lemon Oil are often literal tags, or quotations taken directly from the text of the poem, but the best ones are playful: ‘q finger’ turns out to be a sensual daydream where fingers are named by the letters they touch on a qwerty keyboard, while a poem about the relationship between art and sexuality is entitled ‘Art for fuck’s sake’. ‘Nightstick’ turns out to be a critique of violent sexual imagery as used by the political left – can you really trust an activist who yells ‘FUCK YOU CUNT’ at a police officer?

There is also a good deal of playfulness in Jackson’s deft portraits of people, places and animals. Pretty women have

The narrative voice in Janet Jackson’s Lemon Oil speaks with humour, verve and curiosity, inviting the reader into a conversation about sex, identity politics, industrialism, environmentalism and what to do in Melbourne. You could have some beers with this voice on your back veranda, sit and talk for hours. I bet she makes fantastic mix tapes.

This entry was posted in BOOK REVIEWS and tagged Jackson, Rachael Briggs. Bookmark the permalink.
Ray Briggs teaches philosophy at Stanford University, and writes poems in their spare time. They are the author of Free Logic (UQP 2013) Common Sexual Fantasies, Ruined (Cordite 2015) and Modern American Gods, Volumes I and II (with Anna Zusman, self-published, 2018). Their poems have appeared in Rattle, Able Muse, Cordite, The Weekend Australian, and other venues.