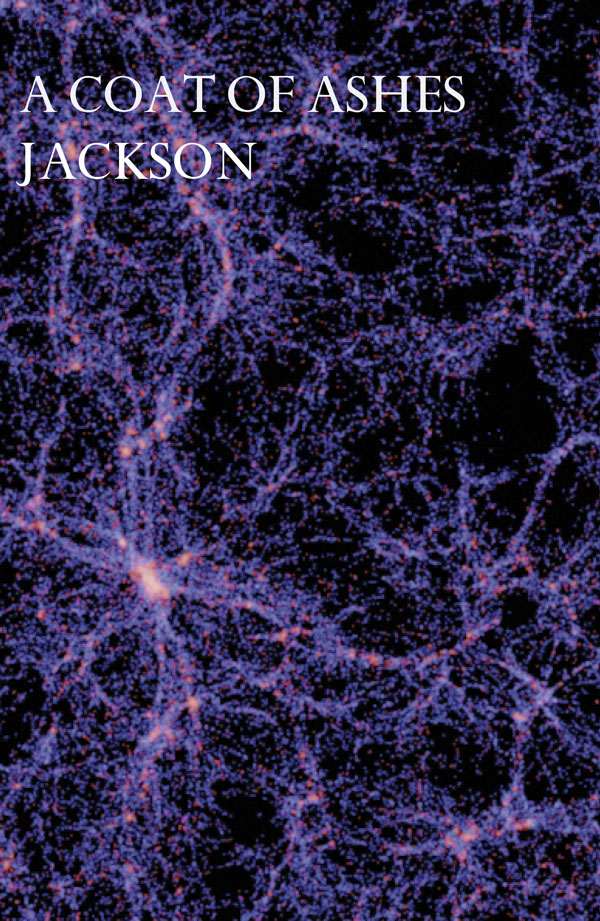 A Coat of Ashes by Jackson
Recent Work Press, 2019

Poetry tries to get at something elemental by coming out of a silence and returning us—restoring us—to that silence. It is one of the soul’s natural habitats. – Edward Hirsch


Jackson’s third book, A Coat of Ashes, published by Canberra’s Recent Work Press, is a contemplation about how the discourses of Daoism (or Taoism), physics and systems theory might be fused through the methodology of poetry. The collection springs from her acclaimed PhD project, which was awarded the Edith Cowan University Research Medal, the Arts and Humanities Research Medal, and the Magdalena Prize for Feminist Research. The accompanying prose component of her thesis offers a rich background of selected writers whose work is imbued by physics or Daoism, as well as her creative approaches to this book.

What compels a poet to unite and experiment with such varying discourses? It turns out Jackson was looking for answers about being and matter; what it is to be, what matter is and what actually matters. Her wager is that poetry, as mediator of spirituality and science, could provide deeper understanding about existing in a world of ecological and postcolonial turmoil. It seems to have paid off in this striking volume of work.

The language features and text structures of conventional scientific writing (impartial, technical, objective) and mystical writing (superlative, interpretive, repetitive), might seem incompatible to merge, and experimental poems like ‘Spangles’ and ‘That vast sea’, which incorporate and respond to cut up texts from science books and the Dao De Jing, do produce dissonant tones and styles. However, the organising element of poetry satisfies chance and we find it possible for facts, laws, theories and mysticism to blend and create new flows. Perhaps the relationship is not as troubled as we are led to believe. Philosophical Daoism, as Jackson says, ‘values silence, listening, humility, mindful presence and the shedding of ego and attachment’. This too, seems to be what Western science values; the self is suspended to allow for observation of the systems in which it operates and to which it belongs.

The poems in this book are deep, long breaths; an opportunity to stop and reflect or enter the room of a poet’s meditations. Despite the intermittent scientific insertions (quark, cambium) or Chinese fragments from Daoist texts (wu, dào kĕ dào fēi cháng dào), the plain and mostly quiet language of these works is gentle and subtle even when the content is grappling existential, environmental and social catastrophes.

In ‘One, two three’, Jackson applies the theory of a cartwheel to childlike nostalgia and a sense of forgiveness:

This poem also demonstrates Jackson’s excellent use of poetry to give and then take away, maximising space and silence:

Space and silence are manipulated in the constraint-led ‘What is Tao?’ which employs a word-length stipulated erasure of Thomas Merton’s translation of the Zhuangzi, ‘Cutting Up an Ox’, where the motion of the space provides the rhythm of the meditation:

Readers can refer to ‘On looking at the Pointers’ to see what happens when science and Daoism meet, and to the list poem ‘The Sage and the Physicist’ to find out what each is not. The Is and the Not are used frequently in this collection, either through affirmatives and negatives (can/can’t, was/wasn’t) or the naming of them, as in ‘That’:

Dreams abound and become another way of watching emotions and reactions, like the apocalyptic opener, ‘The silicon lip of the precipice’ or ‘The other way, the long way’, which challenges the narrator’s inflexibility and anxiety. The use of silence in the final line of ‘The fundamental forces dream’ gives the reader a waking sensation, where blinking eyes search for sense, returning to the title or to the following page for continuity:

Objects and animals are instrumental to the noetic quality of this collection, either through narrative, symbol, personification, allegory or metaphor. These include birds, whales, plants, planes, trains, chairs, cars, acid, bass guitars, dolls and dress shoes. A couple of gems, first from ‘on the path’:

In some poems Jackson utilises a stream of consciousness or form of spaced-out, non-intentional writing. Language becomes tenuous or rambling or rhythmic or all of these things. See ‘lamps’ and its near-language-sense, such as ‘I’ve been curling to juice the drug dumps’, or ‘That girdle!’:

Pages: 1 2
This entry was posted in BOOK REVIEWS and tagged Jackson, Pascalle Burton. Bookmark the permalink.
Pascalle Burton is a poet and performer with an interest in conceptual art and cultural theory. Her debut collection About the Author is Dead is available through Cordite Books. Projects include UN/SPOOL (with Nathan Shepherdson), 24 Hour Gym (with Tessa Rose), and performing in the band The Stress of Leisure.