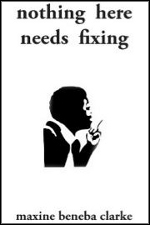 The blurb at the back of the book touts nothing here needs fixing as ‘a stunning attack on the pretentious white male gits who see poetry as an exalted profession to keep away from those who are loud, black, female, happy, or even in possession of lives outside poetry.’ This is a just war, and I’d rather be on Clarke’s side than the opposing forces’. But, as important as Clarke’s mission is, there are places where her strategy could use improvement. She sometimes relies on clichéd language instead of inventing her own state-of-the-art verbal weaponry, or marches through uncontested territory when she could be digging trenches closer to the front.

Let me continue by praising the book’s high points. The opening poem, ‘in karikatur australich deutsch’, showcases Clarke’s talents at their best. This playful German-English macaronic brings a humourous touch to the themes of childhood discipline, authority, and race. The jokes snap: Clarke arranges the first line so that ‘Epping’ (the name of both a Sydney and a Melbourne suburb) sounds hilariously German in the second line, as her speaker drily explains getting in trouble:

There’s also a well-aimed critical point underneath the jokes: this series of anecdotes doubles as a catalogue of petty abuses abetted by the Australian school system. Some of these abuses are explicitly racist – the classmate’s taunt of ‘hey blackie’, and the teacher’s refusal to defend the speaker. Others live in the weird no-man’s-land of plausible deniability – such as another overzealous teacher’s punishment of making the speaker write out:

Here and throughout the book, Clarke’s writing shows the poetic influence of Grace Mera Molisa. Like Molisa, Clarke favours short lines, and end rhymes distributed at irregular intervals; they are both comfortable with multiple languages and registers. In addition to German, she plays with the language of nursery rhymes (‘a good woman in a difficult situation’) and of the King James Bible (‘boxing day’, ‘lot’s wife’). Both the Bible and nursery rhymes are invested with considerable rhythmic power, and Clarke turns this power to her own ends. She takes up unconventional perspectives – defending the old woman who lived in a shoe against slander, and giving plenty of empathetic attention to biblical characters like Mary and Lot’s wife – but the resonance of the conventional rhythms helps to keep the poems animated and afloat.

And like Molisa, Clarke is interested in the question of how to maintain self-respect in the face of intersecting oppressions. Her poems take up the themes of gender (‘boxing day’, ‘men and women’), race (‘in karikatur australich deutsch’), property ownership (‘landlording’, ‘open house’ and, in a global context, ‘drought’), and status as a single parent (‘sleep while the baby is sleeping’, ‘nothing here needs fixing’). Many of them defy easy classification: ‘leaving’ is about the effect of leaving a relationship on the speaker’s economic situation; ‘let alone’ is about the difficulty of being a woman and black and the single parent of a child. Her aim is to defend these marginalised identities, using a combination of personal anecdote and rousing general rhetoric. This lends itself toward preachiness in spots, but when Clarke brings her strongest poetic skills to bear on these themes – playfulness, oratorical rhythms, unusual or inverted perspectives – the results are impressive.

One of the standout poems in the book is ‘lot’s wife’. The Bible story devotes little attention to the motivations of Lot’s wife (she doesn’t even get a name). In Clarke’s retelling, she turns back to watch Sodom burning because she refuses to ignore injustice. With widely and irregularly spaced slant rhymes, the poem creates a subtle echo effect that suits the theme of looking back. This is particularly evident in the closing lines:

Another theme in the book is the experience of single motherhood – both its frustrations and its rewards – demonstrated best in the short poem ‘china’:

Ray Briggs teaches philosophy at Stanford University, and writes poems in their spare time. They are the author of Free Logic (UQP 2013) Common Sexual Fantasies, Ruined (Cordite 2015) and Modern American Gods, Volumes I and II (with Anna Zusman, self-published, 2018). Their poems have appeared in Rattle, Able Muse, Cordite, The Weekend Australian, and other venues.

View all posts by Ray Briggs on Cordite →