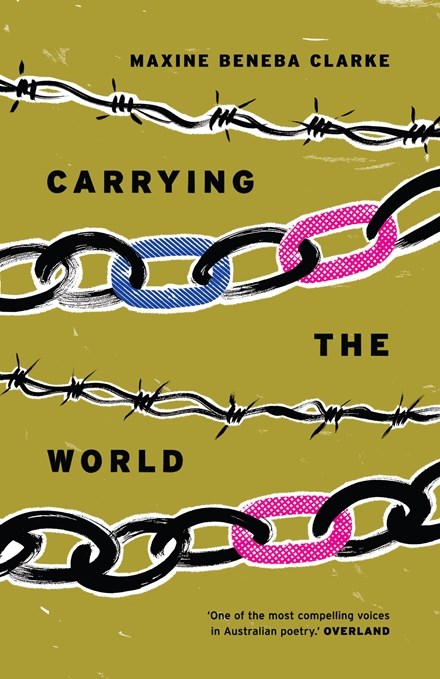 At the launch of Carrying the World, Maxine Beneba Clarke shared the mic with spoken word performers who were part of her decade long journey in poetry. The poignancy of Clarke’s gesture demonstrates how embedded she is in a literary community that erases the distinction between ‘high art’ (page) poetry and the spoken word.

In her poem ‘show us where you’re publishing’ she boldly declares:

Our review of Carrying the World is also a review of our journey into poetry, and our alienation from it. Both of our formal literary educations from high school to university, from the 1990s onwards, entailed a favouring of the Western English canon. While one of us studied Indigenous Australian playwright and poet’s Jack Davis’s play, No Sugar, none of his poems were offered by the curriculum. We struggled with our prescribed poetry and literary texts and missed the opportunity of reading and studying great Aboriginal Australian poets like Oodgeroo Noonuccal / Kath Walker, Lisa Bellear, Lionel Fogarty and Ali Cobby Eckermann. Also absent were non-Anglo poets like Pi O, Adam Aitken, Kim Cheng Boey, Ouyang Yu and Merlinda Bobis. Our experiences of poetry were dull and un-relatable. In contrast, Clarke’s poetry aches and roars of experiences that we can relate to as cis-gendered-identifying women of mixed race Ballardong Noongar and Peranakan-Chinese Malaysian descent.

Carrying the World traverses the autobiographical to the fictional, and ‘Demerara Sugar’ anticipates Clarke’s memoir, The Hate Race. Funded by the Hazel Rowley Fellowship, Clarke and her children traveled to England on a research trip tracing her family’s history and her diasporic Jamaican-Guyanese identity.

Clarke’s clever use of patois in conversation effectively conveys intimate moments that
provides insight into her relationships with relatives and the uncovering of family secrets.

The title poem ‘Carrying the World’ is fictional, historical and mythical; it’s a poem you would expect or imagine a black writer and activist to write. At the same time, it also highlights what it feels like to ‘carry the world’, being weighed down by the heavy social justice work that black women must do. Work that is hard, and rarely acknowledged:

In comparison to black male historical figures, women who have participated in this fight remain under-appreciated and anonymous:

The pressure that this responsibility places on black women writers like Clarke is further demonstrated in ‘what are you going to say’, where she directly confronts the expectation that she must respond to the shooting in the shopping mall in Nairobi.

By the end she realises that ‘the only weapon I have at my immediate disposal is a pen’ resolving to take up the fight. But in the act of writing Clarke acknowledges the exhaustion that comes with ‘carrying the world’.

However, with her growing reputation, she unintentionally falls into being ‘the voice’ for a community, a positioning she questions.

In ‘skin’ she conveys the trauma of racism with an honest simplicity that reading it felt like the words reached out and slapped you.

In short sharp sequences we witness the abject conditioning her body endures in a white settler nation. The nightmarish image is a shocking reminder of the experiences people of colour have come to live with. For this woman writer of Afro-Caribbean descent, race has a strong and powerful presence throughout her collection. Often it is Clarke’s depictions of racial injustice that are the most gruesome but leaves a powerful impact. For example, in ‘mali’ she describes the fear she carries for her unborn son, an emotion that eludes the baby’s father.

The poet Lia Incognita wrote in the Overland article ‘Four perspectives on race & racism in Australian poetry’ that writers of colour are ‘largely ignored by publishers, critics, prize judges, anthology editors, curriculum writers.’ Carrying the World begins to redress this imbalance and for readers like us, it is thrilling to read someone who speaks a truth that is often silenced.

The collection also reveals how challenging her journey has been towards mainstream success. In ‘the end of the affair’ she expresses the struggle of pursuing a passion where race and gender discrimination lurk in the background.

Carrying the World encapsulates the extraordinary journey of a single black mother, poet and author within an industry dominated by white men and women. From writing and performing poetry at the margins to her recent win at the 2017 Victorian Premier’s Literary Awards for poetry, Clarke’s work is breaking down preconceptions and prejudices in white publishing circles. However, what is equally important as her accolades is that her popularity and force is creating new spaces for other vital voices to emerge:

This entry was posted in BOOK REVIEWS and tagged Lian Low, Maxine Beneba Clarke, Timmah Ball. Bookmark the permalink.
Lian Low edited Peril from 2010-2014. She's a writer who has created site-specific spoken word performances for the Melaka Art and Performance Festival in Malaysia and currently working on a memoir.


More by Lian Low on Cordite Poetry Review →
Timmah Ball is a non-fiction writer and occasional poet whose work is influenced by working across urban planning and research. She grew up in Birrarung-ga/Melbourne but her heritage is Ballardong Noongar on her mother’s side. In 2017 she won the Westerly Magazine Patricia Hackett Prize and has written for a range of publications and anthologies.