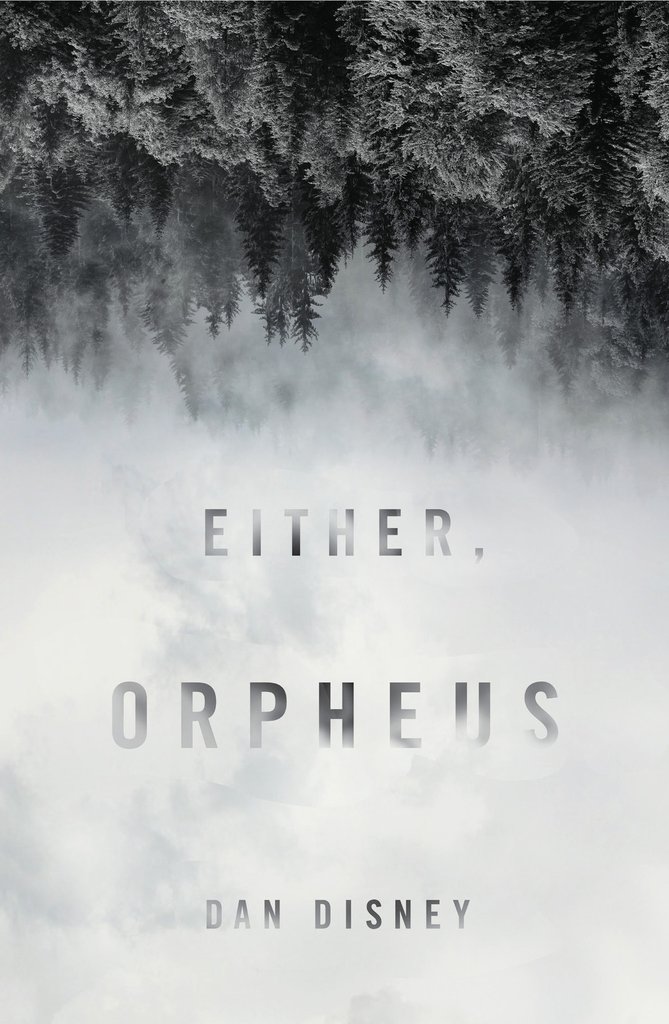 Is the contemporary world really as confused and as doomed as it seems? In his latest book of poetry, either, Orpheus, Dan Disney tends towards the affirmative with his ‘elegiac anthroposcenes’ – assaulting scenes of twenty-first century demise – but he does not attempt to grapple with the problem alone. Instead he enlists the help of a stunning amount of other writers and thinkers.

Kierkegaard and Rilke are the two major influences in this work, though they are far from the only ones. In every poem Disney pits different writers and their thoughts against each other; this creates a kind of poetic conversation, reminiscent of Kierkegaard’s early work in which he argues against himself using different pseudonyms. Sometimes an entire poem of Disney’s is dedicated to one poet, and other times a single poem is set up as a debate between various writers (interesting is Disney’s use of ‘vs.’ as opposed to ‘&’). What is the reason for all this, though?

Disney is intent on finding what he calls a ‘humanising mode’ of poetry that allows us to ‘peer across openings between appearances’ and, like Rilke, mobilise current global anxieties which other forms of writing can tend to shackle or conceal. And it seems that poetry is the only way to do this properly, as it appears to be the only way Disney can form his so-called ‘sound shapes’ that assemble everything from Marxian theories, Cultural Studies commentaries, and the self-proclamations of numerous creative producers of text and art into something that seems total and all-encompassing. By gathering the thoughts and ideas of so many writers, and synthesising these different viewpoints in such an explosive way, Disney erases the boundaries of time and space, as well as the pretense that any of us write or read or think in a vacuum. Disney knows whose ideas he is gathering as his ‘language-pollen’, and he is not trying to hide what he is attempting to do with this work: that is, something different from Kierkegaard’s either/or (a regretful atheist’s desire to divide himself into his ethical and aesthetic parts in an effort to find God) and Sonnets to Orpheus (poems bridging a silence that gives us glimpse into an empty, but responsive, unknown); instead Disney gives us his self-proclaimed ‘godless both/and’. This is the way through for Disney.

The theme of modernity and, more specifically, the constant nature of the modern world is apparent in these poems, largely due to how deliberately Disney grounds his poems in contemporary surrounds and situations. From the very first page we readers are plunged into the mysterious ether that is our century: post-industrial, post-modern, post-fact, post-meaning:

In a grey city filled with office buildings that scraped the underfloor of the clouds, in a grey city of factories run by well-greased machines that never slept in too late (and after all, who could sleep with the to-and-fro, all the shuffling hours of the day), in that city of shuddering systems at work, no-one noticed it at first

It seems to me that Disney sees modernity as a force, in and of itself. Technology and late-stage capitalism seep through the edges of this book; this is the Anthropocene circling around the self-destruct button. Disney seems to be attempting to coalesce the voices of many into a single theory, a single way through the labyrinth that looms all around us as a collective humanity.

Disney focuses on the individual becoming in tune with the universal, in a Kierkegaardian way, but it is never quite spelled out for us as simply as that. Disney isn’t asking to play preacher, if anything he’s simply a master craftsman, handing us a mirror which only reflects our own reactions back to us. Or maybe a better analogy would be that Disney has created a machine of sorts in this book, a kind of computer. The reader approaches either, Orpheus with their conceptions of the world and their unspoken anxieties regarding the present and future, and then these data points are thrown about and combined and examined until, at the end, the reader is left feeling tested and hopefully sharpened by the range of voices present in the pages. Maybe Disney has succeeded at creating a version of what Levertov calls the ‘meta-machine’, using an ‘extra-linguistic silence’ and the repetition of the ‘villanelle’ style to allow us to internalise the external while simultaneously bringing the internal to light.

A villanelle is a kind of fixed verse form, popular for pastoral poems during the eighteenth and nineteenth centuries. The villanelle’s most defining feature – and the one that Disney uses the most in his modernised version of the form – is repetition. His poems obsess over certain lines and ideas. For example, the first three stanzas of a poem dedicated to Ted Hughes:

This form lends itself well to a work of this magnitude and type. Traditional, and yet made modern due to the content of the poems themselves and by Disney’s different ways of inverting the villanelle into something more like concrete poetry, the sense of encapsulating and ‘bringing together’ of history and several viewpoints at once could perhaps only be properly communicated through such a form. Without looping and re-interpreting of the same idea, and without the necessary spaces between lines that the villanelle enforces, Disney’s poems may not have been so good as they are.

In the book’s epilogue Disney calls his poems ‘sound-swarms’, which is a good way to describe how it feels to read this book. It can be assaulting, and the spaces between the sounds and rhythms with which he fills the pages are noticeable. The spaces between the swarms are important to understand and contemplate, like in this poem that plays Alain Badiou against Samuel Beckett:

Pages: 1 2
This entry was posted in BOOK REVIEWS and tagged Alex Kostas, Dan Disney. Bookmark the permalink.
A A Kostas is a Canadian/Australian writer residing in Melbourne. His writing has appeared in publications such as otoliths, Voiceworks, The Suburban Review and Unusual Works. He has also reviewed poetry in Cordite Poetry Review. He is studying a Law/Arts degree at Monash University.