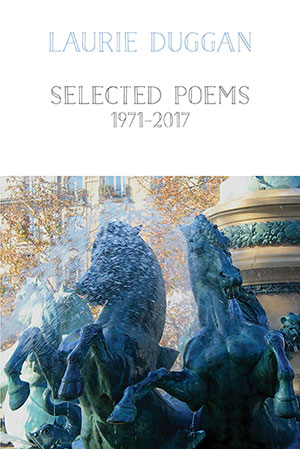 
Laurie Duggan has long been a star within the light-filled firmaments of Australian poetry that first burst into prominence around five decades ago. A so-called ‘Monash poet’, Duggan’s recently published Selected Poems is suffused with images in which he trains an unrelentingly quizzical, reverent eye across apparently mundane terrains:

Here is a poet paring back embellishments and, amid the ennui, Duggan’s images often shift toward transcendental inclination. Hilariously and pointedly, he defines poems as ‘momentary lapses of inattention’, and these texts take opportunity to rove across vacant surface levels while simultaneously interrogating for access to deeper structures. So often this plays out as a culturally constituted position, Duggan imbuing with dissonance the urban frontiers of Australian cities, those places ‘an accident, / a sport on the banks of what river?, / a collection of plate and cotton’.

Early in this book, one senses that Duggan’s peregrinations are a mode by which he casts a visionary’s gaze across ritualised domains while understanding these as mere access points to deeper epistemological possibilities. In one of the first poems, a telling non-question is posed:

The scene could just as easily have been written from England’s Lakes District, and this seems entirely Duggan’s point. Scanning arenas both local (Gippsland, Melbourne, Sydney) and beyond (Europe, etc.), he understands settler rituals to be echoes rote-repeating across someone else’s lands, the reverberations shunting through spaces that remain barely sensible to the poet. Indeed, in the presence of transposed cultural performances – Christmas, and indeed those who would celebrate Christmas – Duggan is no mere cosmopolitan, and instead acknowledges his own voice as illogical, insensible and unknowing, confabulated with lyrics from elsewhere and ‘adapting Wordsworth or Snyder to see those blue ranges toward Warburton’. This is a poetry of profoundest disorientation, and the book leads this reader toward wondering specifically how to be a poet in a colonised place when one’s forbears (maliciously or otherwise) participated in founding colonising structures which both create genocidal erasures and exist still today. It seems that Duggan’s is a style that comports non-connection: his images are blurred or curbed while at once yearning for deeper engagements than the ‘air is hard and cool’, in places where ‘road[s go] nowhere under the clouds and the high-tension lines’. Delivering a specifically antipodean nostalgia, Duggan’s work may well compel us to consider which kinds of poetry can come from places where histories have been silenced, murderously broken, and forcibly overlaid with the very language from which one may hope to shape poetry.

While never explicitly critiquing his colonial position, Duggan insistently understands the vocational discourse that is ‘Australian Poetry’ to be disqualified from delivering mere lyrical unities. The cultural amnesias of this sovereign colonial state consign to Duggan an eye he knows cannot see but which seeks, nonetheless, to take in the ‘acid green paddocks’. Indeed, leave all attempts at disingenuous poetic unities to someone like the ‘Bunyah lad’, a visage toward whom Duggan credibly reserves enduring scorn. In Les Murray’s work he sees the performance of whitely conservative apologias delivering a mountain of content that is ripe for parody and satire:

While Duggan may well write toward landscape (The Ash Range and Blue Hills being his major contributions), he is also pervasively aware that to pretend to be part of a so-called new world’s historical landscape by means of an invading empire’s transported romantic traditions is at best bunkum or, much worse, a contribution that serves to keep in place those themes, forms, prosodies and preoccupations that structurally empower whiteness and white erasure. In other words, a fascistic enterprise of colonial purification, and one in which Duggan will have no part to play.

Instead, here is a poet expressing his motivations toward creative production as a compulsion toward recording flux and chaos; aside from the (perhaps predictable) disavowal that ‘I’ve never wanted to write poems’, here is a poet letting us know he is interested instead in ‘[t]rying to look hard at something’, as if locked into a (Platonic, agonistic) struggle toward clarity:

my eyes glaze over – the idea of appearances takes over from the observation (which works more in the way a sneak photographer would – you don’t really see the photographs until they’re developed – and the scene is no longer before you).

Duggan participates in a late twentieth century Australian iteration of that longstanding trope which understands all poems as failures (recently reiterated in Ben Lerner’s magnificently speculative The Hatred of Poetry, specifically when he retells the myth of Caedmon’s dream). Duggan’s influences are explicit (Ed Dorn, Robert Duncan, others from Black Mountain, more), and these poets from elsewhere remain both indelibly and invisibly interpolated within his texts, spectrally present and ghosting these poems the same way Duggan seems to ghost the domains across which he flits. Indeed, the work in this Selected Poems seems an ‘elsewhere-ing’, not so much an ostranenie (which knocks image sideways by reordering what is seen and then known), but instead a wholesale acceptance that knowing is largely impossible. At one point, Duggan asks ‘[w]hy should I, who have lived in this country all my live, suddenly feel myself an exile in a distant province’, and asserts elsewhere the ‘importance of strange poetry, of unfamiliarity’ as a mode that can contrapuntally disrupt accustomed modes of perception. This seems Duggan’s enduring concern, and his disconnective states seem a generative cultural condition:

If anything, these emblematic texts reveal Duggan’s impossible quest (or methodological concern) toward understanding and connection, written from a place many readers will understand as a colonised place where neither understanding nor connection are so easily claimed. This book makes palpable those absences in a poetry that seems to crave epistemological stability, as if this poet is a seer fumbling blindly their way across unrecognizable, everyday settings. The tones here are almost always paradoxically nostalgic, the content filtered by lenses (critical and creative) made elsewhere.

Pages: 1 2
This entry was posted in BOOK REVIEWS and tagged Dan Disney, Laurie Duggan. Bookmark the permalink.
Dan Disney’s most recent book, accelerations & inertias (Vagabond Press, 2021), was shortlisted for the Judith Wright Calanthe Award and received the Kenneth Slessor Prize. Together with Matthew Hall, he is the editor of New Directions in Contemporary Australian Poetry (Palgrave, 2021).