Review Short: Anna Jackson’s I, Clodia, and Other Portraits 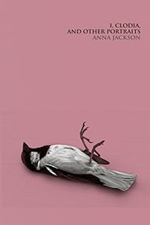 I, Clodia, and Other Portraits by Anna Jackson
Auckland University Press, 2014

Early in this collection, Clodia demands to be ‘loved by one of the new poets’ (4). Instead of beginning with the poet’s invocation of a muse, the muse of I, Clodia seems to summon the poet. Over 34 pages, Jackson imagines Clodia Metelli, the witty, promiscuous Roman aristocrat generally believed to have been the subject, ‘Lesbia’, of Catullus’s love poems – his interlocutor – her voice dovetailing easily with his. This biographical sequence is followed by another, observing an unnamed photographer during ‘the worst disaster of her career –/ this photographing of faces, this creation/ of ‘portraits’’ (41). The poet’s potential as portraitist and biographer preoccupies I, Clodia.

When a poet adopts the perspective of a historical figure, it is tempting to interpret the poem as a costumed performance – the ‘I’ belonging to the poet despite its period disguise (Dorothy Porter’s Akhenaten has been read in this way). ‘I, Clodia’, however, is a conduit for the subject’s voice. This is a departure for Jackson, whose poetry is often laced with autobiography; in Catullus For Children (2003), the Roman poet is coaxed into contemporary New Zealand, specifically into the lives of Jackson’s children. By contrast, ‘I, Clodia’ takes a scholarly and empathic imaginative journey to 1st-century BC Rome. Meticulously researched, technically precise, and psychologically persuasive, this does not appear to be a masked self-portrait, but a portrait of someone Jackson understands deeply.

Clodia’s operatic emotional register matches Catullus’s as she plots their tumultuous affair; helpfully, Jackson provides a list of which Catullus poems correspond to those in her sequence. At turns humorous, witty and poignant, the voice never appears anachronistic. Publicly accused of adultery, Clodia writes to one of her lovers, Caelius Rufus:

The simplicity of Jackson’s apparently prosaic form is deceptive. When read alongside Catullus’s poems, this sequence’s rigorous research and conceptual strength is accentuated. The limitation of the interlocutory concept is the need to characterise Clodia in relation to her renowned male counterparts (Catullus, Cicero, Metellus). While the sequence might have strayed as promiscuously as its subject from the original poems, and thus have emphasised Clodia’s independent qualities, this would have probably have led to anachronism and compromised the section’s role as faithful translation.

In a recent interview for The Lumiere Reader, Jackson stated that she liked ‘the idea of the Clodia poems being only translations of better poems in the original Latin, that these versions only gesture towards but can never quite touch’1. Being allowed to trace the shared images and phrases between Catullus’s poems and Clodia’s is a pleasure. Clodia’s voice – distinctive, with fewer references to herself in the third person – takes Catullus’s metaphors and uses them freshly. Where Catullus asks for kisses, Clodia wants words as ‘endless as the grains/ of Libyan sand in Sylphium-rich Cyrene’ (8); it is tempting to assume that he borrowed this simile from her.

The second section of this collection has an epigraph from Diane Arbus: ‘A photograph is a secret about a secret’. The more that is revealed within the frame, the more the viewer wonders about what is concealed beyond the frame. The stasis of the photograph, particularly the portrait, encourages the viewer to speculate about the narrative in which it has been taken. In ‘The photographer’s Olympics’, the pretty photographer watches triathletes’ arms

The photographer’s techniques (‘photographing/ tighter and tighter corners’ [38]) and idiosyncrasies (‘… hosting a party/ … she can only relax/ when her last guest has left’ [39]) could belong to the poet. The series of character studies that conclude this collection (‘Diane unexploded’, ‘Roland on the outskirts’, ‘Ishmael in the bedroom’) may be figurative descriptions of the photographer’s portraits, or the poet’s own portraits employing elements of the fictional photographer’s method. Unlike ‘I, Clodia’, ‘The Pretty Photographer’ sequence does seem to be Jackson’s costumed self-portrait.

In an article, ‘Catullus in the Playground’2, Jackson quotes Frank O’Hara’s announcement, ‘the poem is at last between two persons instead of two pages’. I, Clodia’s moving portraits suggest poetry between several persons: Clodia and Catullus; Jackson and Clodia; the photographer and her subjects; Jackson and the photographer; the reader and all of the above. It demonstrates the dialogic potential of poetry to accommodate the multiple perspectives (artist’s, subject’s, viewer’s) of a portrait.

This entry was posted in BOOK REVIEWS and tagged Amy Brown, Anna Jackson. Bookmark the permalink.
Amy Brown teaches creative writing at the University of Melbourne. Her first poetry collection, The Propaganda Poster Girl, was shortlisted for Best First Book at the 2009 New Zealand Book Awards. The Odour of Sanctity, a contemporary epic poem that formed the creative half of her doctoral thesis, will be released in July 2013