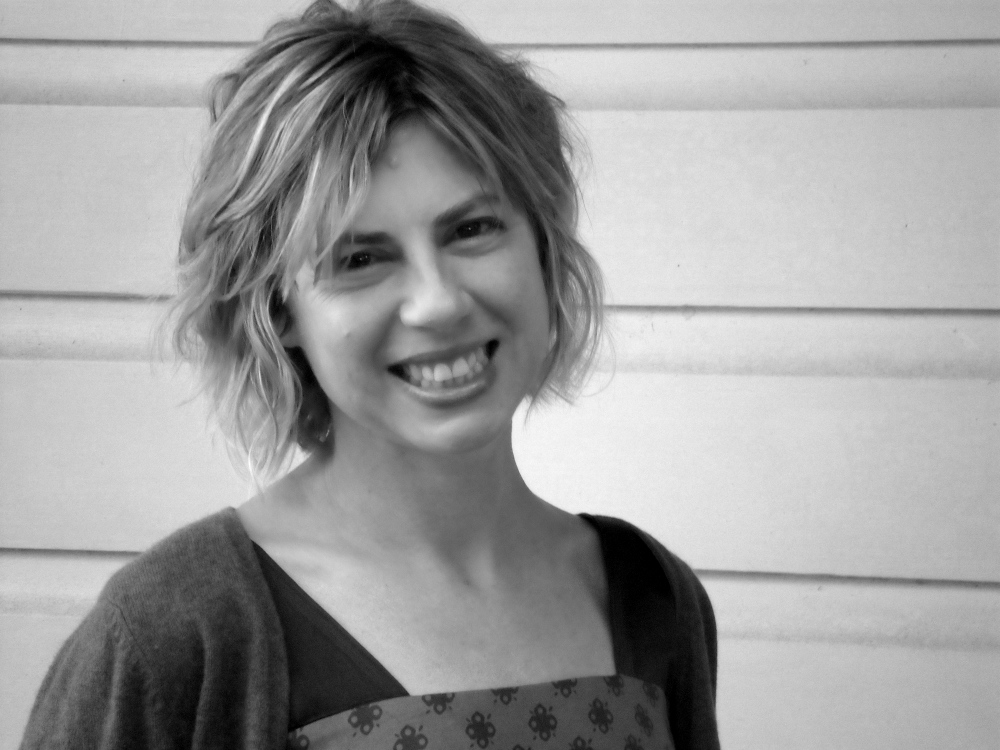 Image of Anna Jackson courtesy of Bellamys at Five

New Zealand poet and academic Anna Jackson’s presence easily fills a large room. At the Verse Biography: Truth or Beauty? conference in Wellington last November (of which Jackson was one of the three organisers), her enthusiasm for lively poetic discussion and debate is clear – abundant questions and wild tangents exhibit a mind tumbling with ideas bursting to be explored.

A similar inquisitiveness is evident in her poetic writing. I, Clodia and Other Portraits (Auckland University Press, 2014), launched during the three-day event, grapples at once with the classical and the contemporary, the dramatic and the humorous, the historical and the imaginary. Split in two, the first half follows the voice of Clodia Metelli, one-time lover of the poet Catullus and the inspiration for his celebrated love poems. The second half follows a ‘pretty photographer,’ drawn – almost against her will – towards the art of portraiture. The book inhabits the complex mindset of the artistic woman across time.

I, Clodia is Jackson’s sixth collection with Auckland University Press, preceded by The Long Road to Tea-Time (2000), The Pastoral Kitchen (2001), Catullus for Children (2003), The Gas Leak (2006) and Thicket (2011). Jackson’s themes are wide-ranging, though each collection showcases the poet’s wry wit and insight into everyday living, from domestic friction to meditations on motherhood, belonging and the games that we play. She discusses her new and previous works in the following interview, which took place beside some raucous teenagers in a harbour café in Wellington, prior to the conference.

Jessica Wilkinson: The title of your new book, I, Clodia and Other Portraits refers to the historical figure of Clodia Metelli, the ‘Lesbia’ of Latin poet Catullus’ love poems. Can you give us some background to this work and its significance to you as a poet?

Anna Jackson: I have been wanting to write this work for a long time. It always seemed to be a project that was waiting for someone to write. The poems by Catullus tell the one half of the story; it’s almost like reading one half of the dialogue. They are really dialogic poems – poems that are arguing, or haranguing, or imploring. So they’re telling a story, and it’s a story that’s in pieces; the poems are out of order. Any reader is always trying to piece it together into a narrative. I, Clodia gives you the missing half of the dialogue.

JW: What drew you to Clodia as a subject?

AJ: Well, two things, and they’re opposite in a way. On the one hand, it was because she’s the missing voice. But on the other hand, because such a sense of her is evoked by the responses (of Catullus). The quality of the conversation tells you so much about the relationship, that you almost know the person who would have entered into it in this way. It’s such a testing, contentious, playful relationship. A lot of the time, Catullus is making a joke that plays on a joke that she has already made. It’s a very intellectual relationship as well as being very erotic and passionate. And they’re very clever, his poems. They work on so many levels, and that’s a part of their relationship, too. They’re showing off to each other. I was aiming to meet this in my poems. It’s a tall order and it’s kind of impossible. Part of what made the project a little more possible for me to take on was the fact that I’m only ever intending to be a translator of poems for which we don’t have the original. I wasn’t going to try to write the poems in Latin, and most of the time a lot of the poems are not in meter, either. This is a contemporary, free verse version.

JW: Given the concept of identifying or providing the absent perspective, would you describe your work as a feminist project?

AJ: I think I would describe myself as a feminist poet, but I see this project also as an act of reading Catullus. So it’s very far from replacing the male view with the story from a female perspective. The more feminist endeavour would really to be to translate some of the lesser known classical women poets, as Josephine Balmer has done. So I didn’t start with a feminist agenda. I, Clodia wouldn’t be the most strategic action to take, in that the woman’s voice is only fictional; it can’t really tell us anything about Roman women or give historical women a voice that has been lost.

JW: Do you see yourself in the character of Clodia?

AJ: I would have liked to have had that relationship that she had with Catullus. I do find that kind of bantering, testing, teasing relationship a lot of fun.

JW: Did you study Latin at school?

AJ: I did, but only for a couple of years, so my Latin is really not very good. And I did a little bit of Latin at University, but it was just an introductory course.

JW: In what ways, other than in the content of the work, does this work draw influence from the classics & Latin poetry?

AJ: Well, I read a lot of that poetry. I read the Catullus with a facing pages text (where the Latin is presented beside the translation), and I was reading the texts that Catullus himself refers to. Jason and Medea, Dido and Aeneas; these are stories he returns to again and again that clearly had a meaning for Catullus and Clodia in their relationship.

For reading the Latin, I used the facing pages texts, and I used the internet to look up words I wasn’t sure about, or for which I wanted an alternative reading. The internet was also helpful for hearing pronunciations of the Latin: on YouTube now, you can access readings of Catullus by Latin scholars, often with critical commentaries as well. It is interesting to learn about the differences in opinion about how the Latin should be read, between, for instance, those readers who are very strong on eliding syllables and others who don’t do that. But most importantly, you can hear how the meter sounded.

Latin meters are very hard to read on the page, partly because they are based on long syllables contrasted with short syllables, instead of the stressed syllables contrasting with unstressed syllables in English, but also because instead of repeating a single metrical foot – a pattern of iambs, or dactyls, or anapaests – they will repeat a line that can be made up of a combination of different metrical feet. So there is no regular repeated rhythm in a line. I couldn’t hear the rhythm in my head to write to, until I heard these YouTube renditions.

The hendecasyllabic metre that was so important to Catullus is one of these complicated metrical patterns, with a spondee or trochee, followed by a choriamb, and rounded off with two iambs and a final trailing unstressed syllable. Or, you can think of it as starting trochaically, then rocking over into iambs. I did write some of the poems in the meter. The poem at the midpoint of the sequence, in which Clodia finally breaks with Catullus, uses this Catullan metre against him. It also borrows from a passage in Euripides Medea, in which Jason attempts to justify to Medea his abandonment of her. One of the interesting things about the Catullus poems is how often when alluding to Greek mythology he puts himself in the position of the heroine/victim. Here we have Clodia putting Catullus in that role. I think the hendecasyllabic metre also gives the poem a rocking, wave-like quality that fits with the sea imagery. Here is an excerpt:

JW: There’s a dead sparrow image on the cover that I recognise. Can you tell me a little bit about that and how the sparrow figures in Catullus and your poems?

AJ: Well, there are two Catullus poems with the sparrow – there’s the one where he wishes he were Lesbia/Clodia’s little sparrow that she allows to peck at her lips and climb on her shoulder and sit against her breast. Then there’s another, after the sparrow has died, which is a rather over-the-top elegiac lament for this bird. It has the little sparrow making its long, dark journey into the underworld.

The sparrow poems were translated a lot in the Renaissance – a Scottish version, for example, with the ‘wee poor birdy’. It was one of the things that, as a Renaissance poet, you put your hand up to do: another sparrow translation!

The sparrow gets picked up by other feminist writers writing back to Catullus. After I finished the project, I read Helen Dunmore’s novelisation of the Catullus story. She’s imagining what Catullus is thinking all the time. I really hated it. She builds up the sparrow in the book, suggesting that Clodia has such an obsessive love for the bird, which Catullus cannot complete with. One of the climactic turning points of the novel is where Catullus turns against this relationship, when Clodia beats up her maid servant for neglecting the bird in some way. It seems a laughable interpretation of the sparrow’s importance. The poems are not about the sparrow’s importance. They’re about his relationship with her. To take the elegy to the sparrow so seriously seems like such a misreading of the tone.

The sparrow in my sequence is not very important except as a prompt for poems that play out between the two people who are important to each other. I was pleased with it as a cover image, though. I think an image of one of the characters would suggest that act of novelisation I didn’t want to do. These are poems that don’t attempt to represent the real feelings of actual, historical people, only what might have been written, within a field of literature we do actually still have access to. We don’t know what they felt, but we know what they wrote. And one of the symbols they used was the sparrow – and it is a beautifully resonant symbol, and bird imagery does keep coming back into the poems throughout the sequence.

Pages: 1 2 3 4
This entry was posted in INTERVIEWS and tagged Anna Jackson, Catullus, Clodia Metelli, Jessica L. Wilkinson, Murray Edmond. Bookmark the permalink.
Jessica L Wilkinson has published three poetic biographies, Marionette: A Biography of Miss Marion Davies (Vagabond 2012), Suite for Percy Grainger (Vagabond 2014) and Music Made Visible: A Biography of George Balanchine (Vagabond, 2019), highly commended for the Wesley Michel Wright Award. In collaboration with composer Simon Charles, Marionette was developed into a performance work of voice, music and sound; they released an album in 2018. Jessica is the founding editor of Rabbit: a journal for nonfiction poetry and the offshoot Rabbit Poets Series of single-author collections by emerging Australian poets. With Bonny Cassidy, she co-edited the anthology Contemporary Australian Feminist Poetry (Hunter, 2016); and with Cassandra Atherton, Memory Book: Portraits of Older Australians in Poetry and Watercolours (Hunter, 2021). She is an associate professor in Creative Writing at RMIT University, Melbourne.