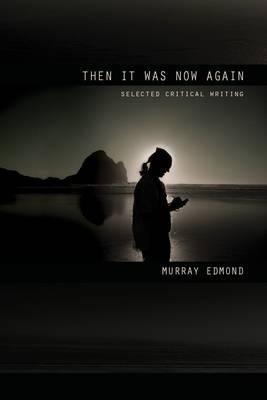 Then It Was Now Again: selected critical writing by Murray Edmond
Atuanui Press, 2014

The essays and reviews in this collection, all previously published, span roughly thirty years of New Zealand literary history, the earliest having been published in 1973 and the most recent from the late 2000s. With one or two exceptions, these pieces tend to focus either on New Zealand poetry or New Zealand theatre, and on the surface this might seem to limit the appeal of this collection to an international audience. Poetry and theatre can sometimes feel like the most distinctly local of art forms, stubbornly resistant to export in all but a few cases, with poetry tending to emphasise language, metaphor and imagery that does not always easily translate into other contexts, and theatre often being intimately tied to a distinct time, space and location. But it is perhaps the regional specificity of these mediums that makes Edmond’s particular type of analysis so compelling. It is often easy to perceive or even dismiss the communities of practitioners, audiences and the critical discourse that surrounds poetry and theatre as isolated and insular, but Edmond is always careful to frame the works that he considers within the broader cultural, political and economic movements that surround them, so that the cumulative effect of reading this collection delivers a sense of how larger trends in New Zealand history (particularly the tumultuous events of the 1980s) can be tracked through the publication of poetry anthologies, through trends and developments in performance and play-writing, and through the shifting priorities of arts funding bodies. Many of the publications and productions that are covered in these essays will now be quite obscure, even to New Zealand readers, but Edmond’s consistent awareness of how they connect to a wider social context ensure that his arguments remain compelling and relevant.

The collection offers a good variety of extended essays and shorter reviews, prefaces and opinion pieces, which help to convey the richness and variety of the artists under consideration. The best and most insightful of the longer essays are those that emerge from Edmond’s later period, in which retrospectively examines works from the 80s and 90s with a deeper awareness of how they are historically placed. His 2005 re-examination of Mervyn Thompson’s one-man autobiographical play Coaltown Blues, for example, provides an excellent exploration of the various factors impacting upon the first performance of the play in 1984, detailing and connecting the deeply divisive economic reforms and their impact on the artistic sector; Thompson’s own history of social and political activism as a playwright; the emerging feminist discourse within the arts and performance communities (which Thompson arguably considered himself to be a part of); the anonymous rape accusation and accompanying attack on Thompson in that same year, by a group of six women who were never identified. Edmond uses the debate that followed the accusation and attack – which remain problematically mysterious to this day – and the protests that accompanied Thompson’s performance of Coaltown Blues, as a means of examining the shifting political and cultural landscape of New Zealand in the 80s. Other highlights from this collection include a deep consideration of Hone Kouka’s trilogy of plays (Waiora, Homefires and the Prophet), which explore the changes in Māori society between 1965 and 2000, through a personal focus on the movements of Māori families between rural and urban environments, and an extended investigation of Gothic influences on New Zealand theatre in the late 20th century. The titular essay ‘Then it was Now Again’ (which takes its title from Janet Frame’s dystopian 1975 novel Intensive Care) contrasts New Zealand’s poetic and colonial histories, and ‘the Original Downstage’ provides a fascinating history of the iconic Wellington theatre, detailing its origin within 60s counter-culture, offering an idea of performance as intervention and provocation, and its eventual movement away from its experimental roots to become a stable and ideologically ‘steady’ Wellington regional theatre. Some of Edmond’s themes and interests are developed across different essays and articles that span decades: such as his observation of the influence of the Commedia Dell ‘Arte tradition on New Zealand’s popular improvised comedy and theatre scene, and how arts funding policies essentially segregated play-writing from New Zealand’s larger literary culture by largely confining development grants for new projects to established theatres and performance groups rather than individual writers. The reviews, prefaces and introductions that are collected here demonstrate a consistent interest in the decisions that go into the creation of poetry anthologies and what areas of New Zealand life, thought and culture end up being represented or prioritised through the selection process.

On a final note, reading through this collection also provides a sense of the vibrancy of literary discussion, debate and experimentation that existed in New Zealand in the period that is mainly covered in these essays (1970s to early 1990s). For many New Zealand writers of my generation, it is easy to overlook this period in focusing on the writers and literary communities that emerged as a part of, or in resistance to, Bill Manhire’s influential workshop at the Victoria University of Wellington from the 1990s onwards, and so to an extent, this book serves as a valuable reminder of the artistic communities, movements, forums and disputes that existed in this earlier period and how they worked to shape contemporary literary culture. It is difficult to read this collection without feeling a sense of loss at Edmond’s repeated references to journals and magazines that have long vanished from the landscape of New Zealand literature. It has always been a struggle to keep literary periodicals alive in a small country like New Zealand, but it is clear from these essays that this period provided a much richer range of outlets for both creative work and critical discourse. As Edmond’s criticism demonstrates, literary and artistic practice is sustained and contextualised by the commentary that surrounds it, and while the critical communities that are developing online as we move beyond print culture should not be discounted, there is a fervency in the argument and discussion referred to in this collection which no longer seems to be so prevalent.

This entry was posted in BOOK REVIEWS and tagged Julian Novitz, Murray Edmond. Bookmark the permalink.
Julian Novitz is a New Zealand writer and a lecturer at the Swinburne University of Technology.