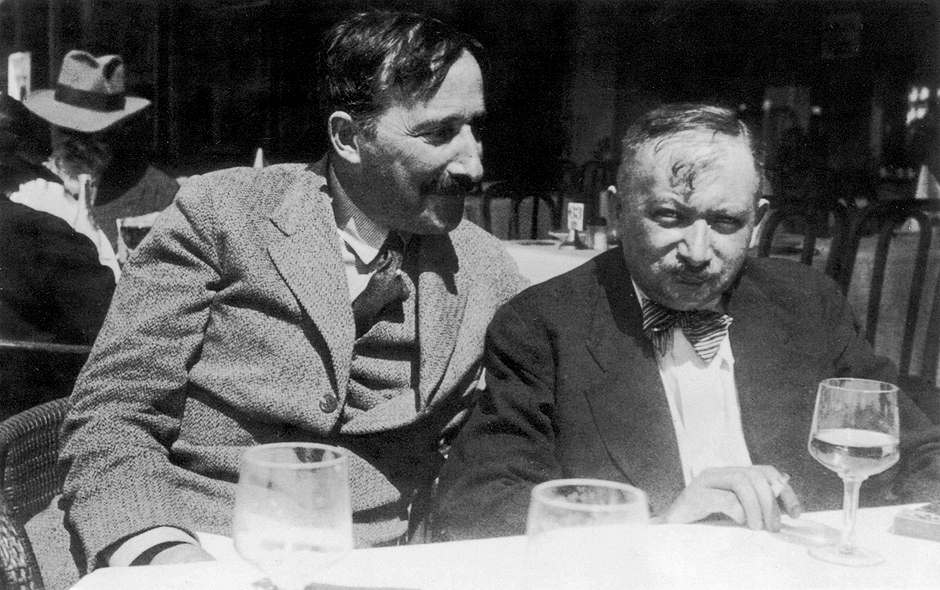 Just around the block from Vienna’s State Opera, on the outside of a mustard coloured building, is a plaque noting that here – in diesem Haus – W.H. Auden died. He was staying here following a reading at the Palais Palffy, and sometime in the night, while someone else was eating or opening a window, the poet’s heart failed.

Joan Didion describes the kinds of people who keep private notebooks as ‘children afflicted apparently at birth with some presentiment of loss.’ Vienna feels like that kind of city: the kind that keeps a private notebook.

A hundred and twenty years ago, Vienna was one of the artistic and cultural capitals of the world. The list of locals is impressive, and regularly recited: Freud was here, Schönberg, Schnitzler, Zweig, Mahler, Wittgenstein. Because there were barriers to Jews studying and teaching in the universities, a café culture sprung up which was dedicated to perpetual education. Clive James has argued that a rare upside to the rampant anti-Semitism of the time was that the Jewish literati were not wasting their energy writing doctoral theses. Instead, the coffee shops hosted discussion across multiple disciplines, and ideas were exchanged, critiqued, and developed.

The Viennese writer Stefan Zweig – visible most recently as the inspiration for Wes Anderson’s Oscar-winning The Grand Budapest Hotel – described Vienna before the First World War. ‘No one,’ Zweig wrote, ‘thought of wars, of revolutions, or revolts. All that was radical, all violence, seemed impossible in an age of reason.’ Within the coffee shop culture, characters abounded; the writer Peter Altenberg wore sandals in the snow, had his mail delivered to a café, and spent a lot of time chasing underage girls; the masterful aphorist Karl Kraus pronounced that journalists ‘write because they have nothing to say, and have something to say because they write’; and the independently wealthy Zweig served his guests liqueur scattered with flakes of gold leaf.

As we know, it didn’t last. When the Austro-Hungarian Empire entered the First World War, the Habsburgs’ grip was already loose, and four years later the empire – which at the time comprised 15 nations and over 50 million people – collapsed. On one night in 1918, Vienna went from being the capital of a massive empire, to the capital of a tiny European country stripped of mass, power and resources. (Today, the country remains relatively obscure; when I told people I was moving to Vienna, a surprising number asked if I could speak Italian, or if I had plans of becoming a gondolier).

In 1918, while Austria was suffering from the loss of its empire, the loss of the war, and inflation so crippling that a pair of shoelaces cost what would have once been the price of an entire shoe store, Zweig watched as thousands of unemployed people ‘shook their fists at the profiteers and foreigners in their luxurious cars who bought whole row of streets like a box of matches’. The industries that the empire had relied on were suddenly on foreign soil; ‘the railroads had become wrecked stumps, the State Bank received in place of its gold the gigantic burden of war debt.’ And the worst was still to come.

From Zweig’s house in Salzburg, you could stand on the terrace and look across into Germany, where on the other side of the valley, there was a house on the mountain. The owner of the house had lived many of his years in Vienna, painting watercolours of the Ringstraße’s famous buildings – he could stand for hours in front of the opera house, he said – and after twice failing to get into Vienna’s Academy of Fine Arts, finally left his beloved city for Munich in 1913. After fighting for the Germans in the First World War and spending time in prison, he eventually became Germany’s chancellor, and in 1938, he returned to invade his home country and begin World War II. The damage to Vienna’s intellectual culture, already profound, was complete. As a result of Hitler’s policies, two thirds of Vienna’s Jews were expelled and more than 65,000 were murdered in concentration camps.

Auden’s elegy for Yeats from 1939 reads: ‘In the nightmare of the dark/ All the dogs of Europe bark,/ And the living nations wait,/ Each sequestered in its hate’. My German Jewish grandmother left Germany, and moved as far away from Europe as she could, settling in New Zealand, where she forgot her native language. Even Stefan Zweig, a fierce optimist, lost hope. ‘Europe seemed to me,’ he wrote, ‘doomed to die by its own madness’. He and his wife moved to Brazil where they tried to rebuild their lives. In February 1942, even though it was clear that the Nazis could not win the war, they committed suicide.

Hitler’s 1938 ‘invasion’ of Austria had been of a curious kind: where many of the supposed victims came out of their houses to cheer on the invader and wave flags in welcome. After the war, the Allies declared that Austria had been Nazism’s ‘first victim’. In contrast to Germany, where attempts towards de-Nazification began as soon as the war was over, Austria, as supposed victim, did not confront its Nazi past until the 1980s.

The Slovenian philosopher Slavoj Žižek, visiting Vienna this month to speak at the national theatre, may have been trying to charm the locals when he suggested that it could well be time for a ‘second Vienna renaissance.’ Žižek, with his usual beguiling mix of wit, wisdom, and Hollywood references, said to the sold out Viennese audience, ‘120 years ago you were … like in Star Wars, the centre of the whole universe … everything was here.’

Since I moved to Vienna, I’ve heard half a dozen visiting academics and politicians announce, with varying degrees of conviction, that now Vienna is returning to the days when the city was a great artistic, intellectual capital. I can’t tell you whether these announcements are based on firm evidence, or if such hopeful claims have been made since the 1940s. In his 2007 Cultural Amnesia, Clive James said Vienna ‘feels empty now,’ and corrupted by ‘irreversible physic damage’. It’s certainly true that some of the old coffee houses seem to have lost their intellectual spirit, and have fallen into tourist territory.

The despair and grief of the twentieth century were for a long time denied or avoided; Vienna continued to celebrate Mozart, the height of empire, and the fin de siècle, skipping over the more recent century of horror and grief. This year’s Eurovision coverage traversed much of the same territory as Vienna’s usual tourism videos: Vienna’s beautiful buildings along the Ringstraße, the leafy Prater, the Spanish riding school. But there was no sign of the Flaktürme – the six giant concrete towers built by the Nazis and scattered through the city. In actuality, these Viennese buildings are just as iconic – one, now serving as a giant aquarium near the centre of town, has giant words splayed across it, as designed by the New York artist Lawrence Weiner, commissioned by the Vienna Festival in 1991. It reads Zerschmettert in Stücke im Frieden der Nacht (Smashed to pieces in the still of the night).

American poet Elizabeth Bishop’s famous villanelle ‘One Art’ shows us not only the disastrous nature of loss, but our desperate and futile attempts to control it. ‘The art of losing isn’t hard to master’ the poem insists, until the final stanza shows us the impossibility of mastery:

That loss, the speaker knows – ‘(Write it!)’ – must be written, must be admitted.

Perhaps like the writer who is afflicted with loss, the tension of that loss translates into a kind of activity. A strength of present day Berlin is that loss and shame are in the air. The city always feels unfinished, raw. ‘(Write it!)’ it says, knowing that loss can never be unwritten, can only be written again and again. In Vienna, the young Viennese people I know far prefer the park with the giant Nazi flaktowers to the park where the emperor once rode around in his carriage.

This morning in a hipster coffee shop near where I live, on a street where the Austrians once welcomed Hitler’s motorcade, a woman sits by the window with a long-since-drunk coffee, and writes, slowly, in her notebook. Above her the high rafters are speckled with glimmery gold leaf, and she is taking her time. She consults the book beside her, which I peer at to get a closer look. It is Freud’s Die Traumdeutung (The Interpretation of Dreams). The dead’s words are modified in the guts of the living. I wonder what dreams she might be interpreting, what loss she’s trying to master.

This entry was posted in ESSAYS and tagged Alice Miller, Clive James, Slavoj Žižek, Stefan Zweig, W.H. Auden. Bookmark the permalink.
Alice Miller is a New Zealand writer based in Vienna. She is a graduate of the International Institute of Modern Letters and the Iowa Writers' Workshop, and the author of The Limits, published by Auckland University Press and Shearsman. Alice has received the BNZ Katherine Mansfield Award, the Royal Society of NZ Manhire Prize and fellowships from Grimshaw Sargeson and Glenn Schaeffer. In 2015-2016 she will be a fellow at the Akademie Schloss Solitude in Stuttgart.