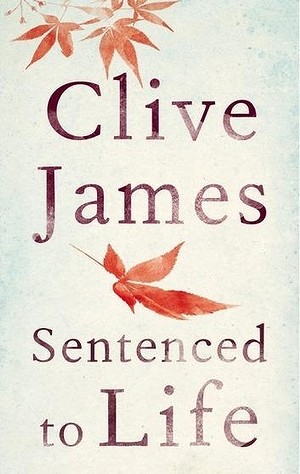 Clive James’s Sentenced to Life is a poetic autopathography outlining his years living with emphysema and leukemia. While illness biographies ‘present information about diagnosis, treatment and outcome trajectories’, more importantly, they ‘share how the illness has affected the sufferer’s wider life course, social network and views of health care institutions.’, as Rachel Hall-Clifford puts it in her Autopathographies: How ‘Sick Lit’ Shapes Knowledge of the Illness Experience. However, James’s poetry is most often centred on his personal discomfort, regrets and ultimately his quest for reassurance that his writing and memory will survive his death.

In Sentenced to Life, more than a dozen poems refer to James’s malaise, including lines such as:

‘Now, not just old, but ill’; ‘pills in heaps, blood tests, X-rays and scans’; ‘bad health’; ‘this is the measure of my dying years’; ‘If I, that is should finally succumb/To these infirmities’; ‘Too frail to fly’; ‘everything about you goes downhill’; ‘my cataracts invest he bright spring day’; ‘my latest fever clad me in a cold sweat’; ‘another bout of pneumonia’; ‘limps along’; ‘ old man dying’; ‘all day tomorrow I have tests and scans’ and ‘dying by inches’.

While it does allow us insight into the patient experience, this ‘sick lit’, as Tanith Carey dubbed the genre in her article on chronic illness in young adult fiction, is repetitive and, at times, empty. While it could be argued that this is the point of writing mundanely about illness, in James’s case this often has more to do with the gauche and clunky rhymes that he employs in much of his ‘illness’ poetry, rather than metaphorically describing the experience of chronic sickness, itself.

The book is also a very public mea culpa dedicated to his wife of forty-five years, for his eight-year affair with Leanne Edelston (Geoffrey’s first wife). Indeed, James has been living in exile, after the affair was made public and his wife asked him to leave their family home. His poems chronicling his enduring love for his wife read awkwardly and there is the sense that he knows that it is all too little, too late.

Perhaps the most irritating feature of James’s poetry is the predictable, often abab, rhyme scheme. There is also a halting quality to the lines of poetry based on the capitalisation of the first letter of every word that begins a line. Indeed, every line of poetry in the book begins with a capital letter, as was the trend prior to the twentieth century. While this may work for the likes of Andrew Marvell and John Donne, in a contemporary context it is more the mark of a poet disconnected from poetry; the lines simply don’t flow. For example, in the reflective ‘Landfall’, the abab rhyme coupled with the use of capitalisation is distracting. It is as if the line has been constructed solely around the end line rhyme and this, coupled with the clichés of ‘clutching hearts’ and ‘dreams (coming) true’, make for a disappointing reflection of James’s book signings and celebrity events in his heyday:

The self-abasing quality of many of the poems is, at times, wearing for the reader. James ‘was born weak and always ha(s) been weak’, he is ‘a cot-case’. Other poems reference this ‘weakness’, ‘feebleness’, ‘frailness’ and lines such as, ‘If I seem close to tears/It’s for my sins, not sickness’; ‘soon only sad scraps will remain’; ‘my death is something I must live with now’; ‘a stricken beast’; ‘now I see the shell of what I was’ are more theatrical than moving in their composition. The repetition of similar statements desensitises the reader to the multifarious references to death and dying. Sentenced to Life is James’s final poetic performance.

In the eponymous poem, and the first in the collection, James outlines his illness in tandem with his faithlessness. There are some memorable images, such as the ‘Ice-bound sleep’ (although this same image is repeated in other poems in the collection), but the end line rhymes are amateur in their composition and, once again, the capitalisation of the beginning of each line interferes, overriding the enjambments:

Several of James’s poems refer to this idea of confessing and repenting in order to receive absolution. His sins, which he has discussed in the press, are more than just ‘faithless(ness)’. They include selfishness, conceitedness and blind ambition. He is keen to ‘expatiate self-blame’ but finds that: ‘I repent and yet find no relief’.

‘Driftwood Houses’ begins with the same cold and coughing as ‘Sentenced to Life’, but reads as James’s final love letter to his wife:

This vision of her from an earlier time provokes the pronouncement that he is ‘most blessed of men’. If he is aiming to ‘enumerate (his) wrongs’, it’s too easy and insubstantial from his deathbed. However, it is his poem, ‘Japanese Maple’, that is the one brilliant moment in this book. First published in The New Yorker in September 2014, the poem went viral. No doubt this is partly due to it being a poignant, heartfelt and beautifully crafted poem, but also partly about the macabre interest that can be had in reading someone’s final words:

The second person address is arresting and affective, but it is the humble tone of this piece, the understanding that the maple will continue growing and spreading its branches long after his death that is incredibly moving. While the rhyme scheme is quite rigid, it works as a lullaby in this poem rather than a vice.

This entry was posted in BOOK REVIEWS and tagged Cassandra Atherton, Clive James. Bookmark the permalink.
Cassandra Atherton was a Harvard Visiting Scholar in English in 2016. She has written seven books of prose poetry and is the current poetry editor of Westerly and is co-writing Prose Poetry: An Introduction for Princeton University Press.