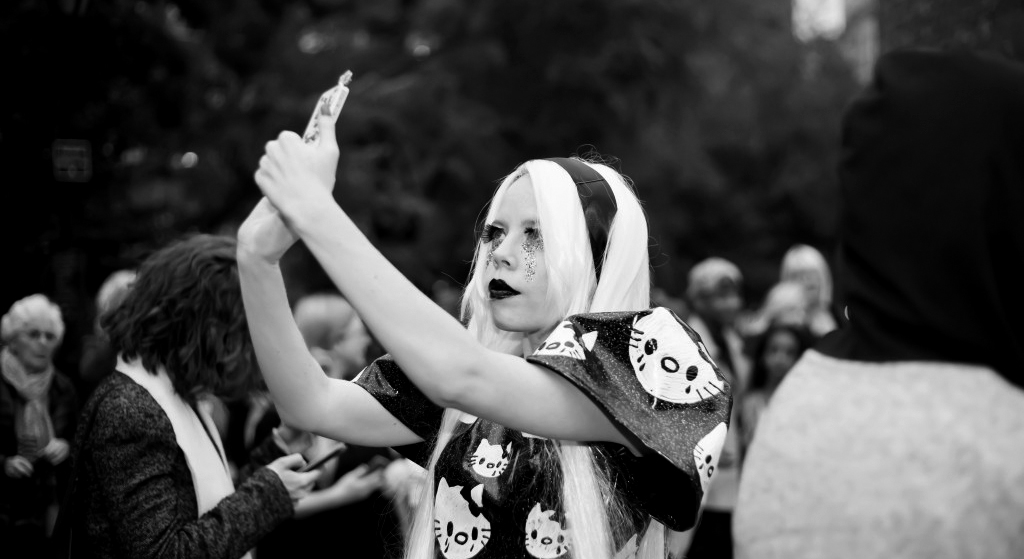 Kate Durbin is an LA-based poet, performance artist and teacher. Her work often explores performances of gender, femininity, celebrity and labour. She has written books of poems, including her most recent, E! Entertainment, and her recent exhibitions include Body Anxiety, a collective and online show, as well as Cloud 9, for New Hive, in which she asked women what they did for money while recreating a live ‘sex cam’ performance of their responses. She is the writer-in-residency for the Queensland Poetry Festival in late August 2015. I’ve been interested in her work for a number of years now, and found her overall poetics a quite rigorous intellectual project that was also amusing, open and honest. I managed to catch Kate between her busy schedule to ask her a few questions about recent and upcoming work, faceless Birkin bags and The Hills.

Elena Gomez: When you are thinking about bodies, work, women, money, at the beginning, what makes something turn out to be a poem, and what makes it turn out to be a piece of performance art? Do you know what it will be when you start? Did you know, for example, that Cloud 9 would always take up that sort of ephemeral/performative web space?

Kate Durbin: Usually the form comes after thinking through some problem or topic. I have to think about something for a long time, years usually, and research and obsess. Then as the form comes it is an integral part of the concept. For example, with Cloud 9 it was important to be performing both on New Hive’s platform and on the cam girl site simultaneously, as the relationship between the art world and sex-camming was one I wanted to explore. But it took me over a year to figure that out. With most of my work there is a textual score involved, so in a way Cloud 9 is not worlds different from, say, E! Entertainment because there is a text involved that is channeled in a way and embodied. I don’t really think of poetry as anything other than text, any kind of text-based art is poetry to me. But how those texts will be embodied or performed shifts depending on what mediums will best express or disrupt the text in generative ways.

EG: in E! Entertainment I really enjoyed The Hills section, probably because it’s the one show in there I actually had watched with some regularity, years ago. That section was a sort of ‘straight’ or straight-seeming description of those particular scenes, but I wondered what sort of decisions you had to make in composing it. Whether you had to rewrite a lot of descriptions or whether you expected it to become the kind of text that it did when you started?

KD: It took me three years to make ‘The Hills’ just right. I transcribed everything minutely from the screen and then crafted and shaped it. I didn’t necessarily re-write things, since it’s all true to screen, but did watch and re-watch scenes and put certain things in and take certain things out. As I worked on it over time it started to have certain rules and a rhythm of its own, and I did make conscious choices about, for example, whether to use the word ‘viewable’ vs. ‘seen’ (I decided we do not ‘see’ or ‘witness’ what’s on tv, we ‘view’ it passively and blindly). It was a process sort of like sculpting, I’d imagine, out of marble – I didn’t know what the final shape under the marble would be, only that it was there as I felt my way through. I didn’t expect it to be so strange and sad when I began, but these are art works I like the most – where the artist follows an impulse and sees where that impulse leads.

EG: I know I’m going on about it now, but I felt like I really got the Hills bit for some reason. It brought back memories of some of those scenes for me but mostly of how ashamed and quiet I was about the fact I watched it. You’ve spoken about that before, I think, i.e. challenging perceptions of our celebrity consumption habits. Do you think there has been a recent shift in certain art/aesthetics scenes to take seriously those subjects others have deemed ‘frivolous’, or do you see this as an extension/development of certain postwar art practices?

KD: I think they are taken seriously in works of art now but often in art the popular mediums and their players are still very judged and there is a moralising that happens to keep people feeling safe and superior. Especially with the women on reality tv shows. They are seen as bimbos, idiots, fame-mongers, and victims. I think my book E! captures the sense of almost total entrapment these women experience, but also the book refrains from judging them, and, I hope, reveals that we are all trapped by our society. Nikki Darling compared the women of E! to ‘gladiators’ who had succeeded under a capitalist system by turning themselves into ‘object zombies’.

EG: Can you expand a little on the idea of the ‘object zombie’? I love it. And the gladiators concept.

KD: An object zombie is what results when you try to ‘win’ at capitalism. The women on these shows are like gladiators because they are so good at what they do, they are so good at winning at this rigged game, and we are all watching like spectators at the roman coliseum.

EG: Who are you reading or watching/experience at the moment?

KD: I think all of the female net-based artists in Body Anxiety, the online exhibition I was recently a part of, are amazing. The exhibit was curated by Jennifer Chan and Leah Schrager.

EG: Kept Women was somewhat similar to E! Entertainment in that both sort of play with transcription, descriptions, in the former’s case, the rooms in the Playboy Mansion, and for the latter, reality television shows. Even in Cloud 9, there was a sort of multi-voiced transcript that you assembled as part of the performance. What drew you to this particular mode of writing? What did you find it useful for? Were there any frustrating aspects of thinking about text and language in a sense of recording device?

KD: I am more interested in the collective reality that we are creating together than in any individual experience. And so I write through many voices and I also like to place things side by side to look at the accumulation. It is probably a result of our late capitalist garbage heap that I work like this, overpopulation and all of that. But it’s not all negative, after all that is so much energy we are all putting in – what might happen if we shifted that energy? What could we create?

EG: Who is your favourite Disney princess and why?

KD: I feel there is one princess, with many faces. That was the idea I wanted to get across with the fake Birkin bag I had made with faceless Disney princesses bejewelled on it. The purse was originally inspired by a dress Peggy Noland made for me with faceless Disney characters on it. As a girl I liked the blonde princesses, Aurora and Cinderella, because I am blonde. I believed like they did that a man was going to save me. Who is a princess without her prince? Without her wealth and bloodline? Without her doting public? I want to know, and I want to know why we still want those things, what is underneath those desires.

Pages: 1 2
This entry was posted in INTERVIEWS and tagged Elena Gomez, Kate Durbin. Bookmark the permalink.
Elena Gomez is a poet and book editor living in Melbourne. She is the author of Body of Work (Cordite, 2018), Admit the Joyous Passion of Revolt (2020) and several chapbooks and pamphlets. She is currently reviews editor for Cordite and a PhD candidate at the University of Melbourne.