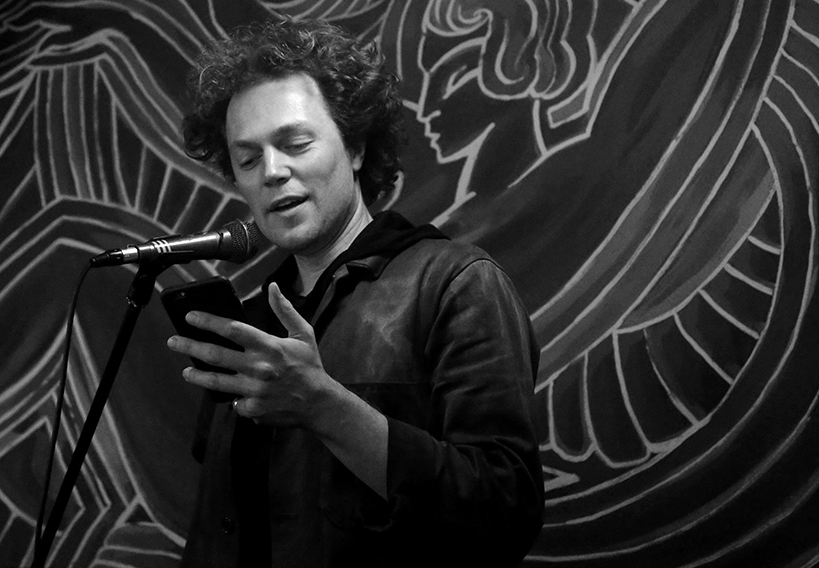 Toby Fitch is a poet who has not only published a number of books, most recently Where the Sky had Hung Before (Vagabond, 2019), but also worked across many different roles in the literary community. Aside from writing award-winning poetry – his book Rawshock (Puncher & Wattmann) won the 2012 Grace Leven Prize for poetry – he also teaches creative writing, runs workshops and events, including the monthly poetry reading night at Sappho Books Café & Wine Bar, a Sydney institution, and is poetry editor at Overland magazine. I was lucky enough to catch Toby in person during a brief Sydney visit, and we met at his local pub, Newtown’s Carlisle Castle, to talk about poetry games, the limits of precarity for poets and Robert Klippel.

Elena Gomez: What, if anything, do you think poetry is for?

Toby Fitch: I think it’s for lots of things. For me it’s to make meaning of my world and the world around me – to make sense and critique. Even though a lot of my poems don’t seem to mean all that much sometimes, or, you know, are complicated in their meanings or conflicted – so much of life is complicated, meaningless, random – it’s a way of processing and making something out of that … as in poiesis, to make, to bring something into existence that wasn’t there before. I wouldn’t really know what to do if I weren’t doing poetry or art of some kind. Sometimes I feel like it’s something that keeps me going. What did Gertrude Stein say about repetition – there’s no such thing, only insistence?

EG: You wrote songs and played in bands when you were younger, but then later started writing mainly poetry. How did that shift occur?

TF: Well, I did write some poetry at school, just never with much intent. I loved it, secretly, but didn’t realise it was a thing that could mean or say so much, probably because my late high school English teacher was disparaging – she gave me a backhanded compliment once that I’d probably make a good children’s author, like that was a bad thing. Playing in a band, experimenting with rock‘n’roll, metal, punk and alternative stuff, and feeling vaguely anti-authoritarian because of that, was more easily appealing than poetry back then, before I learned to despise the commercial structures of the music industry. But I still love the deceptively simple, malleable structures of pop songs, and how flexible chord progressions can be in giving basic lyrics some weight. Anyway, I’d been in bands and then I was at uni, and I didn’t know specifically what I wanted to do (besides make art) so I did a communications degree, and was eyeing off all the writing and cultural studies electives. When I moved across to those courses it immediately felt right, to be reading and writing and thinking more intently. I was mostly writing short stories but then at the start of the official fiction class they handed a piece of paper around to get us to put down our emails so we could all start workshopping, and I made one up on the spot, which was ‘freddyfitchisnotapoet’ at yahoo dot com (it doesn’t exist any more). It was a weird, contrary thing to do – I’m often contrary. And so I proceeded to write poetry, of course, seriously. My parents were almost going to call me Freddy – it was either Freddy or Toby – and I also had an imaginary childhood friend I called Charlie, so there was something in that moment of writing down that email, that act, which kind of acknowledged the ongoing construction of self via language; there’s always been a sense of another (or multiple) possible me(s), and I guess that’s central to my writing, even though there are also poems I write that are nominally from the perspective of other characters/collectives/machines.

EG: There’s an unsettling of the ‘self’ in all your work. You slip between different modes and personas and voices, especially in your latest collection, Where Only the Sky had Hung Before. Those slippages often occur in playful and experimental ways. I’m interested in those techniques you use, and your approach to them. What draws you to word play and collage and black out?

TF: They’re games but also methods of critique, of seeking out form to suit the vast content we all have to contend with. One of the only new year’s resolutions I’ve ever made is to get better at cryptic crosswords, or at least do them more, because I like doing them and it’s a similar kind of game for me with a poem ¬– the cryptic, making sense of it, not purposefully being cryptic but getting into that flexible head space with language. So that’s a starting point, like any starting point – word play, collage, black out – each being methods that lead somewhere surprising. I’ve never tried to adhere to any particular tradition of writing poetry, although there are lineages and traditions and avant-gardes I prefer, such as the French of Rimbaud and Baudelaire, the ruptures of Dada and the Situationists, the aimed synthesis of the unconscious and the political in the Surrealists and how that was partly taken on in the poetry of the New York School. The history of writing is so convoluted, though, especially now with the very real wastelands of the internet, and so I feel like I’m sometimes sifting through lots of different poets and their work, and other writers’ work, seeking out my own glinting fragments like some kind of rubbish collector or grifter, and then sculpting something out of that resonant trash. I mean, maybe I just want my poems to be Gaudi structures.

EG: You write through these other writers you’ve alluded to, as well as others, and in many different modes and genres, plus the internet and memes. What’s the relationship between these and the point you made earlier about making meaning of the world? Are those related?

TF: Absolutely. I probably spend more of my reading time on the internet these days than in books, or even in the materials I have to read so as to teach, say, modernism to creative writing students, and so there are always those different literatures or types of texts at play, clashing in my head and unconscious, and so in the small amount of time that I do have in amongst working precariously to feed a family it’s become essential to set myself games to be able to write – to keep writing. My poems are often simply accretions, built from notes and lists and jottings and found text (stuff I read in my feeds, whether news, theory, politics, sports commentary, social media polemic, whatever). Sometimes I have lists of ideas for poems and I’ll go back and have a look at those and I might try one out one night after dinner (or at work when I shouldn’t) and gather the relevant textual materials together and just play, make Lego of them, see where it goes.

Pages: 1 2 3 4
This entry was posted in INTERVIEWS and tagged Elena Gomez, Robert Klippel, Toby Fitch. Bookmark the permalink.
Elena Gomez is a poet and book editor living in Melbourne. She is the author of Body of Work (Cordite, 2018), Admit the Joyous Passion of Revolt (2020) and several chapbooks and pamphlets. She is currently reviews editor for Cordite and a PhD candidate at the University of Melbourne.


More by Elena Gomez on Cordite Poetry Review →
Toby Fitch is the current poetry editor of Overland and a casualised academic in creative writing at the University of Sydney. His collections of poems include Where Only the Sky had Hung Before (Vagabond 2019) and Sydney Spleen (forthcoming with Giramondo in July 2021). He lives on unceded Gadigal Land.

One Response to ‘The amorphousness of meaning-making’: Elena Gomez Interviews Toby Fitch