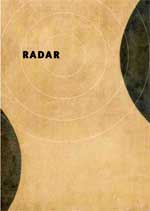 Radar. Green blips on a black screen. A large and vulnerable craft navigating a changeable world. A technological attempt to locate an invisible danger, or to give shape to darkness. All these associations emerge out of the poetry of Kevin Brophy and Nathan Curnow in their joint collection Radar, albeit in an intimate mode: these poets observe the ways in which we navigate through our lives in the contemporary world and improvise meaning. It is difficult, though, to talk about ‘the book’ because these two poets differ strikingly in their approaches.

Nathan Curnow’s poems trace the outlines of family, religion, pop culture and community from the inside. They are deeply personal, in the sense that there appears to be much at stake in the writing, and they are autobiographical, but they are delivered with great confidence and composure. Curnow’s voice is an intriguing collision of the laconic and the insistent: arguably archetypally Australian, and very much of the contemporary moment.

The collection begins with memory and mystery, a childhood of religion and the absence of miracles, the father a church minister sent to various towns. Curnow evokes the child’s view – the child’s incomprehension – of this claustrophobic milieu, with the wit and knowingness of an adult looking back. There are some piercing and stark lines here, phrases of anger and compassion.

The struggle to understand, to regain some kind of authority over the past, turns most powerfully on experiences of the natural world, the vivid realisation of the absence of control. In ‘Blessing’, faith and its restrictions are not mentioned explicitly, but hover over the poem. A baby bird has fallen from the nest and is being consumed by ants. The ‘cruel injustice’ of the scene reveals that such conceptions of judgement are purely human, and that what is purely human is part of nature: ‘I tried to bury the blessing of existence there / but sometimes it rushes back’.

As these poems move away from memory into the present, there is an interesting and subtle shift in poetic language – from a tensile lyricism towards a more spacious and labile voice. While these poems are still melancholy and unresolved, they also seem more able to hold onto contradiction and to follow tangents, and more at home in the world. The references to pop culture – the Simpsons, McDonalds, Google Earth, Kanye West – are there not as meta-commentary or ironic pastiche, but because they are a part of the world Curnow inhabits. They arrive, perhaps not surprisingly, with the children. This section is, to my mind, the most original and fluid of Curnow’s contribution to Radar. These poems are funny, vigorous, intelligent, poignant and casual – they evoke an absurdity, busyness and loss familiar to all parents.

There are moments where an extended metaphor feels strained, as in ‘The Piano Lesson’, which contains some brilliant and resonant phrases, but comes across as overly deliberate in its accumulation of musical references, overshadowing the genuine pathos of the poem’s final scene. But these moments are rare. Curnow is consistently adept at fusing disturbing suggestion with an almost offhand conversational tone, with metaphorical barbs tucked tightly into the lines. This is demonstrated memorably in ‘Meltdown’, which takes many risks but is one of the highlights of the book, along with ‘Reply’, an account of an everyday ‘awkward’ encounter which lifts at the end into an almost transcendent instance of the reader-writer relationship. There are poems here, too, that gesture towards a more postmodern sensibility (‘Love Song #5’), to concrete poetry (‘Telepathy Poem’) and to sheer play and homage (‘NYE sms’). It even contains, in a moment that for me brought the 1990s vividly back, a ‘bonus track’.

Andy Jackson is a poet and creative writing teacher, and was awarded the inaugural Writing the Future of Health Fellowship. He has been shortlisted for the Kenneth Slessor Prize for Poetry, the John Bray Poetry Award and the Victorian Premier's Prize for Poetry. Andy has co-edited disability-themed issues of Southerly and Australian Poetry Journal, and his latest poetry collection is Human Looking, which won the 2022 ALS Gold Medal.