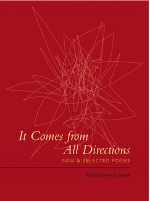 For more than 40 years, Rae Desmond Jones has remained one of Australia’s most challenging and rewarding poets, and in my opinion a major one, who has pursued an often hilarious, always astonishing and sometimes grimly confronting campaign against dullness, comfortable formulas and poetic complacency; and Grand Parade is to be applauded for drawing together some of his best work here.

Jones has put a secure thumbprint on Australian poetry, beginning with his first book, Orpheus with a Tuba, published 1973. Another seven volumes have appeared since then, all well represented here. In addition, we have 29 new poems, which show that the poet’s ability to raise a smile – and the hackles of some – has continued unabated. The collection begins with Jones’s most recent work; followed by poems selected from the 1980s; then from the 1970s. There is something of a break in the 1990s, when Jones became a novelist, and then a political activist and counsellor from 1992 – 1996, followed by a stint in 2005 as mayor of the inner Sydney shire of Ashfield. Jones hung up his mayoral chains in 2007, publishing four of his eight books of poems since that time, suggesting a new infusion of creative energy. And just a few pages in, there is a wonderful love poem, ‘At 71’, which celebrates the poet turning 71, but with no loss of vitality:

The newest poems crackle with RDJ’s characteristic energy, often illuminated by his ‘gutter and stars’ view of life, as in ‘Hot summer on the flat top’:

There is a fascinating recurrence in Jones’s poetic world of images that ‘stare back’ at the poet, a series of often mysteriously empty reflections: ‘… two moons reflected on the surface / of our empty heavens, empty of desire, / staring at their perfect twin …’ (‘The death of Christ’); and, in a more downbeat example: ‘… TJ drops his customised Harley in the street / At just the right angle so the moon / Stares unblinking at her own reflection / In the silver black enamel of the tank …’ (‘Heat’).

For Jones, the thing that ultimately reflects upon experience, usually unblinkingly, is the poem itself. This is fully evident in his handling of the confessional mode, which in much 20th century poetry is marked by a foregrounding of intimate, highly personal – or even shameful or taboo – biographical subject matter. Well, there is plenty of that here, as Jones’ worldview was shaped by his origins in the battler heartland of Broken Hill’s mining and industrial area, and by its unsentimental and sometimes brutal culture. Early on, Jones had a string of soul-destroying, dead-end jobs, and a journey racked by breakdowns and difficulties, along the way mixing with marginal and knock-about types of every description. But Jones’s sometimes hard-nosed view of his subjects and subject matter is negotiated through a sensibility imbued with great sympathetic understanding, and an especially keen empathy for the suffering and difficulties of others:

There are a number of poems about old age, and the ironically titled ‘Answered prayers’ anticipates a time when, ‘I stand in the centre of an echoing stage / with my lines forgotten & there is nobody there.’ The poem, ‘Westfield water music’ is a wonderfully corrosive essay in the banal, set in a suburban palace of desire, full of glittering and seductive baubles of consumerism; yet the most interesting sight is the somewhat abject ‘guy in yellow overalls wearing a mobile in a holster’ who ‘stabs a mars bar / wrapper / With a spike before it slides on to the escalators …’, and whose concentration finally reduces to a vision of escape, as he sees ‘a plastic bag rise, a drifting bloom of opaque light. // He jumps & pokes but the bag swims on through the watery air.’

In Jones’s most worrying poem, ‘The deadshits’, an account of a rape is mediated through the speaking voice of one of the rapists: a highly risky gambit. The poem voices the complaints of a group of stereotypical ‘white-trash yobbos’ who, fuelled by alcohol, dope and class envy, crash a party held by their betters – middle class kids with rich and indulgent parents, they own cars, can afford a university education and casually display markers of ‘high’ culture (such as classical music, fashionable clothes). But one of the well-to-do-kids, perhaps in a misinterpreted friendly gesture, ‘bludged 15 of graeme’s ciggys / (and) where we come from you don’t do that / & not come across …’ so they determine to gang rape her. She fights back gamely, kneeing the chief yobbo in ‘the bollocks’, and so they eventually back off, impressed by the intended victim’s ‘guts’. The yobbos then conclude, with huge irony, that education ‘must do things for you’, considering the girl has shown such fighting spirit, the only value they respect in the whole confrontation.

Jones here gets under the skin of the protagonists, while his actual point of view is objective, outside the poem and its narrative voice, as he examines with a sort of despairing precision the seething forces of envy and anger at play, the stereotyping of both victim and perpetrator, the taking and the denial of power. Here, as elsewhere, Jones is able to enter the emotional voids of profoundly damaged people who mangle their own humanity as they revolve around their own little stars of ignorance and emptiness, and blithely abuse the rights and humanity of others. The yobbos of ‘The deadshits’ are just extreme examples of a human spectrum that Jones sees as typical.

Jones, in his own life, has had to pull himself up by his bootstraps, and university was the path. Around 1970 he began teaching in secondary schools and you can sense his frustration, in ‘Decline and fall’, when he struggles in the classroom to impress some young people with the importance of ideas, and an understanding of the past: ‘… do you know why the roman empire fell? I ask / who cares? A boy giggles. / that is the reason, I say.’

John Jenkins is best known as a poet. He also writes short fiction, non-fiction and occasionally for radio and live performance. He has worked as a journalist and book editor and taught in universities. He lives near Victoria’s Yarra Valley, and is widely travelled. His most recent poetry book is Growing up with Mr Menzies (John Leonard Press, 2008).

View all posts by John Jenkins on Cordite →