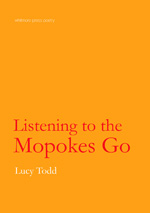 Listening to the Mopokes Go by Lucy Todd
Whitmore Press, 2013

‘Mopoke’ is the onomatopoeic nickname of the Southern Boobook or Tasmanian Spotted Owl, known in New Zealand (where I come from) as a ‘morepork’. This bit of idiom in the title of Lucy Todd’s debut chapbook prepares the reader for a collection attuned to its locality. ‘Listening’ also suggests the poet’s patient attention to sensory detail.

What the title and cheerful egg-yolk yellow cover don’t prepare one for is the unflinchingly observed darkness that modulates the light, the tender and the lyrical. This collection, without any melodrama, conveys the everyday uncanny and visceral elements of growing up, leaving home, returning home, and continuously remembering (recreating) the family stories that make us who we are.

The title poem closes the collection with a delicate parting narrative, both crystalline and cryptic as a fairy tale:

The lines are so firm and well broken that there is no need for punctuation. Rhythmic half-rhyme and simple syntax let the cautionary tale unfold with sinuous clarity. ‘Murray cod’, ‘red gums’, and, indeed, the ‘mopokes’, flesh out the bones of the poem with delicious specificity. Throughout the collection, familiar stories are made particular to Todd with keen observations and original imagery.

From the collection’s first poem, ‘The Violet Bed’, the reader is introduced to Todd’s imagistic, subtly metaphorical style. A filmic shot of an insulin pen in a violet bed (‘the orange plastic and petals flattened blue’) lets the objects become touchstones, activating unsaid memories and an implied relationship. William Carlos Williams’ ‘no ideas but in things’, from Paterson (another elegiac tribute to a poet’s home), comes to mind here.

The following poem, ‘Fragments’ declares how imagery will be used in the collection: perhaps suggesting that the reader let the scenes and objects be – to not arrange them into a narrative. But, that is inevitable. After only two brief lyrics, the reader is already learning about Todd’s family, and, more importantly about Todd’s acute eye for detail: ‘My mother sharpening her knife in front of the news/ locking her tongue into molar holes’ (2).

As the collection progresses Todd modulates the poems’ perspectives, zooming in on a relationship in ‘When he rushes it’, and creating the effect of simultaneous intimacy and anonymity.

Another paradox follows; in ‘I don’t know why’, it is as if there is Vaseline on the lens – a deliberate, clear doubt in place of traditional certainty:

Conveying a memory convincingly often means relinquishing a degree of certainty and logic, allowing details to be fragmentary, chronologies upset, emotions ambiguous. Todd ensure that, while the content may be necessarily nebulous, the poem itself is clear and graspable, by letting objects stand in for abstractions. Instead of praying, a woman is holding beads. Instead of devotion, there is the odour of orchids.

These objects become motifs, creating smooth segues between poems – the reader is taken from a church, to rosary beads counted during a ferry-crossing, to swimming, to flooding.

As we reach ‘Black waters’ the absence of punctuation is particularly apt, the syntax indicated by idiosyncratic line gaps. There are richly sensory and original descriptions of light and dark here. Todd is ‘drawing circles with the sun and my tea-stained skin’ until there is simply:

The voice of the poem appears to be subsumed into the described objects. While there is metaphor at work here, it doesn’t rob the poem of its tactility.

‘Flooding’ is another smooth example of metaphorical and literal imagery working in tandem, at neither image’s expense. As is ‘Milk’, in which a precise description of separating milk turns into an ideal vehicle for relaying the memory of a visceral, personal experience.

Later, the poems themselves turn into objects. The quilt metaphor in ‘Grandma’s Garden’ is deftly crafted. In ‘Thirst’, the poem isn’t just made tangible but animated: ‘the poem bends its neck to the blue lake/ with a thirsty white throat’ (16). There is a playful confidence that is continued in ‘Variations on a poem by Donald Justice’, many lines of which are, I think, an improvement on Justice’s. For instance, Todd replaces: ‘And the sun will be bright then on the dark glasses of strangers/ And in the eyes of a few friends from my childhood’ with ‘and the moon will pool at the foot of a strange crowd/ and fill the letterboxes of childhood neighbours’ (18). The moony repetition of the ‘oo’ and the uncanny image of a glowing letterbox might trump Justice’s ‘dark glasses of strangers’.

Listening to the Mopokes Go is an impressive, pleasurable debut, full of scenes that both trigger and linger as memories. I will be listening for Todd’s voice in the future.

This entry was posted in BOOK REVIEWS and tagged Amy Brown, Lucy Todd. Bookmark the permalink.
Amy Brown teaches creative writing at the University of Melbourne. Her first poetry collection, The Propaganda Poster Girl, was shortlisted for Best First Book at the 2009 New Zealand Book Awards. The Odour of Sanctity, a contemporary epic poem that formed the creative half of her doctoral thesis, will be released in July 2013