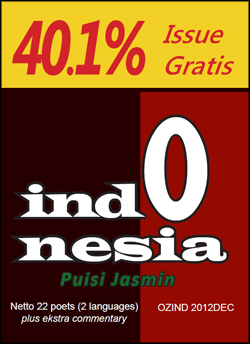 When I approached major Indonesian poet Sapardi Djoko Damono – godfather of that sprawling nation’s contemporary poetics and a renowned translator of English-language works into Bahasa Indonesia – about working with me on a kind of ‘translation exchange’ to then publish online and promote in our countries, he e-replied enthusiastically that ‘we must’!

But it was with a slight twinge – the kind of cogent relish fork that skewers your mood (just enough, but none too deep) when you learn your most recent great idea is not as original as its first eureka promised you – that I read further into Damono’s email to learn that he’d done exactly this back in 1991 (sans the online angle). Mendorong Jack Kuntikunti: Sepilihan Sajak Dari Australia collects one to two poems from 41 Australian poets; together, the works form an anthology with Indonesian translations published side-by-side with the English originals. Co-editor for the project was Canberra-based poet R F Brissenden. Damono sent me a well-loved copy of the book immediately (I imagine it’s well out of print).

None of the book’s frontmatter, cover blurbs, editors’ statements or the introduction, written by David Brooks, has an English translation/original included … so I am not sure what angle or MO Damono and Brissenden took or exactly why they chose the poets they did.

Just who was included in that group of 41? Here they are in the order they appear in the book:

Quite the line-up and, generally, they are safe choices (including at least two couples and a few well-established odd-couples). It would have been 1989–1990, roughly, when this collection was being developed.

In my preliminary discussions with Damono, he proffered that he’d distinctly be interested in translating established ‘younger’ poets, possibly each with only a full-length book or three out, whose writing careers were clearly very much on the uptick and who would be writing poetry for decades to come. And he’d donate his time in so doing. It occurred to me then, triggered by his generosity, that Mendorong Jack Kuntikunti was only one-way: English words from Australian poets translated into Indonesian and no reciprocity. That aforementioned twinge stopped immediately and my excitement grew.

The number of poets from each country for this special issue was initially set at 20. I put together a list of 25 writers (knowing there would be decliners or non-repliers) whose work features strong lyricism to best serve the translation process and not unduly tax the gentlemen’s agreement this project had been up to that point: Damano the translator, we the editors, Cordite the publisher. We wanted a mix of gender, geographic region and style from each country. Indeed, I got exactly 20 enthusiastic replies.

Unfortunately, a fair few of the Australian poets I approached – writers who initially agreed to be a part of the translation exchange – were unable or perhaps, in the end, unwilling to meet our deadline for the translations to commence. Yes, I did ask for new work. Yes, all poems were graciously donated by the authors. That we were down to 11 poets instead of 20 was fine. The result is that the diversity of Australian poets I had intended to include fell a bit short, but the quality that remained did not. The spirit of the project was very much intact.

By the contribution deadline, I had invited John McGlynn, director of The Lontar Foundation in Jakarta – and at his recommendation, academic and translator Deborah Cole and bilingual Indonesian poet and translator Dorothea Rosa Herliany – to join the project to help ensure its full realisation in translation and cementing the details Damono and I first agreed on. They have done amazing work to help make this special issue happen. I would be keenly interested in a volume II of this type of exchange with Indonesian poets, focusing more on experimental works (which would require a far larger translation crew and a larger budget, read: any amount > 0$).

So why Indonesia? How did I come to get in touch with Sapardi Djoko Damono in the first place, let alone McGlynn, Cole and Herliany?

During the time I was learning the rigging of ropes and jibs that intertwine and billow to form Cordite Poetry Review from David Prater, grand Oz behind the curtain of this website for so many years, I was concurrently in the thick of editing a collection of memoir essays from overseas-born writers now living in and writing from Australia. (Not to mention keeping a pragmatic day job as well. And being a new father. And being a husband. And commuting on Yarra Trams.) Researching for this nonfiction anthology is how I came to commission an essay from Lily Yulianti Farid, a superb short-story writer now living in Brunswick, Victoria. As it turned out, she is also director of the Makassar International Writers Festival on the north-central Indonesian island of Celebes. Farid had invited Damono out to the festival in 2011 and soon extended an invitation to me in 2012. There, I met McGlynn and the author and actor Luna Vidya, whose photos I used for this issue.

Farid, as it also turned out, knew some handy contacts at the US Embassy in Jakarta, a possible funding source for me (as I am both a US citizen and an irreversible permanent Australian resident). It was. They did. And so I travelled to Indonesia as a guest of the American Embassy (after much scrutiny of my career). The indefatigable Esti Durahsanti, a public-relations officer at the embassy, met me in Makassar and doubled as my translator and minder at some events outside the festival at Hasanuddin University. It turned out Durahsanti’s father is a very close friend of none other than Sapardi Djoko Damono, whom we talked about at great length – which indirectly sparked the redoubling of my effort to make this special issue happen.

So it’s been a circuitous calligraphy of good fortune, ‘turned outs’ and prescient timing that sees this special issue happening at all. But that, too, is how it occasionally bends. I hope you enjoy the poems.