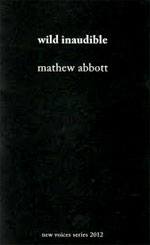 The organisational body Australian Poetry Ltd, formerly the Australian Poetry Centre, has reintroduced its ‘New Poets Series’ as a ‘new voices series’ via first books of poetry by Mathew Abbott and Eileen Chong., Both books are around 30-40 pages, and repeat the same production errors of the 2010 and 2009 series. This review focuses on the poetry of Mathew Abbott’s wild inaudible.

In the latter stages of the writing of wild inaudible, Mathew Abbott’s mentor, the poet and critic Peter Minter, encouraged Abbott to ‘explode’ his stanzas, to explore the possibility of moving off the left margin. In the published poems we find clusters of stanzas, most often couplets and triads, that twist down the page, giving the feeling that there is no left margin or, at least, that it’s a constantly shifting point of origin. In this, there is a hint of William Carlos Williams’s spread-out triads, but Abbott’s form is more aligned with Wallace Stevens’s poetic conceptions around imagination and reality, i.e. that we exist in tension ‘between the phenomena the world puts before us, and the ideas of order that our imagination imposes upon the world’ (‘Wallace Stevens’, New World Encyclopedia, 2008). Or, as Abbott’s poem ‘california’ puts it:

Of course, the influence of Charles Olson and Robert Creeley (and even of their predecessor Walt Whitman and his ‘I Sing the Body Electric’) is evident in terms of the opening of the field, of form and content –the line moving with the breath, the poem opening to whatever might take it in a new direction. As Charles Olson wrote in his essay ‘Projective Verse’, quoting Robert Creeley, ‘Form is never more than an extension of content’. But Abbott opens the field with a more contracted or focused use of breath (maybe ‘refocused’ is the word) – writing with a resistance to the overblown by harnessing an internal electricity, i.e. the body’s rhythms. In this sense, there’s a kind of ecopoetics at play, too, and it can be seen in phrases like: ‘wind argued / with the sea’, or ‘a plastic bag / flipping in the twigs / of the meatworld’, or ‘i was trying / to take it further // when i was set upon / by brambles’, but these lines are taken out of context. Rather, his condensed, mini stanzas and taut rhythms are sinewy and muscular, turning on a dime, seemingly effortless like athletes showing no sweat. Yet, being made of language, Abbott’s lines are also a kind of manmade technology, the energy-saving kind – like a watch, self-perpetuating on centripetal and centrifugal force: ‘when not yourself you / glitch around the house // a rattle copied / in discretely / hepped up signals’ (20). It’s like there’s a ticking rhythm behind the words. Or maybe it’s a bass-player’s rhythm, driving the direction of a band, underscoring or rupturing the emotion of a song through accents and right-angled shifts in direction. Abbott moonlights as a bass-player in a punk band, and his lines have that punk force – a wildness, or animal instinct, an undercurrent of danger. There’s even a poem called ‘attenborough’, with a rhythmic pulse that emulates, as Abbott puts it: ‘the wonky natural 2 / -step of the animal / human heart’ (20).

These centripetal/centrifugal rhythms that dart in unpredictable zigzags from taut stanza to taut stanza represent Abbott’s form, his philosophically informed mode – experimental, but not in any way maximal like his predecessors I’ve mentioned. His mode is minimal, thin, vortex-like, and has a touch of Paul Celan in its brevity and intensity (‘each mouth agog / at its own situation’).

In the opening poem, ‘good morning’, there’s an unfolding of all the major themes in the book: darkness, dreams, sleep, waking, light, sensation, consciousness, environment, witnessing, language, nerves, the body – in that order.

As we move through the book, there’s ‘california’ (‘birds are out in it’), there’s ‘hell to be got out of’ in ‘nevada’, and then Australia, the ‘settled hard / luck country’. There’s a ‘layabout’ girl (maybe a girlfriend?) – ‘the night is teeming / as she glints / her skin just frizzes’. And then there’s ‘old blue eyes’ – ‘how to dress and sex / there’s something in the eye’. There’s ‘the lungs themselves’ and ‘the desire to abandon the city’.

‘[T]here are these distances’.

Toby Fitch is the current poetry editor of Overland and a casualised academic in creative writing at the University of Sydney. His collections of poems include Where Only the Sky had Hung Before (Vagabond 2019) and Sydney Spleen (forthcoming with Giramondo in July 2021). He lives on unceded Gadigal Land.

View all posts by Toby Fitch on Cordite →