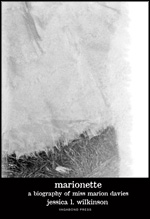 Historical Actuality and the Realpoetik

In an intriguing vispo ‘Free Music,’ published here in Cordite in 2011, Jessica L. Wilkinson hangs a score. Hung, literally: for what is it about the musical score that gets hung up on text? What was the final sentence? No: hang the score, hang it, Wilkinson writes! Wilkinson’s visible labor is at work in the lower half of the piece, where letters are strung along lines: alphabetic versus diastemmatic (or neumic) notation. Notes like the limbs of puppets on strings. To furnish the object with a description: strings are not lines. Strings are weighed down; strings hold things, and in the case of puppets, strings direct them. If social forms or even ideology (à la Althusser) dictate the lives of individuals, we are all on strings. We can take a pun: like music, we are not free. These may be vocal, Superego strings, or poetry’s hangman pulling the strings on music. Nonetheless, we’re hanging on them, and we move accordingly.

Wilkinson’s latest book, marionette: a biography of miss marion davies, (Vagabond Press, 2012) is the culmination of research at the UCLA Film and Television Archives that led also to the publication of an earlier chapbook, marionette: notes towards the life and times of miss marion davies (Vagabond, 2012). Its temporal notation is a film reel. As Wilkinson puts it in ‘Notes,’ to start at the end as it were:

Importantly, marionette is presented in nine sections or ‘reels,’ as were the films of Marion’s that I held, touched and viewed in the archive. Each page is self-contained and separated from the next, as if, strung out, they were single frames in a long line of images (film strip). [. . .] marionette is an attempt to enact – through and beyond words – Marion’s ‘voice’ and ‘spirit.’ I acknowledge the gaps and blanks in my poetic biography, intended as a gesture towards forgotten spaces in the historical imaginary. Though the unravelled threads of these stories are here to be gathered, I leave it to the reader to take up the strings of this ‘marionette’ and assign to it a voice – dynamic, shifting and multiple.1

An important word here: enact. Marion Davies is hanging on the poet’s strings, being enacted. Wilkinson is doing the enacting through Marion Davies. Crucially also present is that this enactment is both through and beyond words. There is a missing element here that escapes language. If the letter is violent, its violence is to obscure rather than to reveal Marion’s spirit. The voice, or in Lacanese the object of the invocatory drive, is precisely a remainder of the historical Symbolic. That is, the voice is not Marion’s voice or the poet’s voice. Rather, voice is multiple, like an empty shifter awaiting signification, ‘assigned’ by the writerly strings of the marionette. Voice, like free music, must be hung (echoes of castration). It is the object that the reader is left with as a remainder of the historical work of the poet and her subject. The poetic voice both emerges out of history and escapes history.

In 2012, Wilkinson co-authored ‘The Realpoetik Manifesto’ with Ali Alizadeh, published here in Cordite Poetry Review. These are some of its points:

If the science of historical inquiry takes poetry to task on its bibliographic rigor and the punctiliousness of its technique in using, processing and interpreting archival sources, the sense is that poetry must move with the times.3 Consequently, marionette could also be called Realpoetik precisely because its attitude to history is one of advocating ‘rigorous research as poetic process.’ marionette is about the hold the poet, Wilkinson, has on history, as much as it is about the hold history has on her, the poet. The actuality of history in marionette is both an enactment that is retroactive – an antipatriarchal re-enactment (Wilkinson occupying the subject-position, playing the actress Marion Davies contra the Susan Alexander of Orson Welles’s Citizen Kane, 1941) – and an unlocking of the deep archive, the actuality of history itself (the Impossible of the historical Real, of Davies-in-herself).4 The ethico-political implications of activating the actuality of history in poetry are vast. Could this be the power of the immersive quality of cinépoetry or ‘feminist documentary poetics’ (to use Ann Vickery’s description of marionette) to unlock the reality of history’s stark actuality via the interventional, interpretive act?

Undoubtedly, another clear influence on Wilkinson is one of the world’s greatest living poets Susan Howe, supreme technician of historical poetry and a subject in Wilkinson’s PhD thesis. Kate Lilley writes of Susan Howe’s Blackwork:

Howe turns the conundrum of aesthetic production – how to produce something new when so much already exists – in the direction of a profound and various intertextuality in which writing represents neither a simple negation of individuality nor a naive assertion of it, but a self-conscious negotiation of the problematic of identity and genealogy. Just as a child literally derives from its parents but cannot fail to differ from them, in a sense the distinctiveness of Howe’s writing just is, but it also comes from her self-conscious deployment of techniques of creative appropriation and combination and her openness to history, especially the endlessly ramifying material histories of books, authors and readers.5

To create something truly new, in aesthetic production, the poet finds herself faced once again with the historical-intertextual conundrum: ‘so much already exists,’ so what now? For Howe, one remedy or response to this is to immerse oneself in material history, the infinity of the book, in the archive and the lives and traces of its authors and readers. A paradox then surfaces: the poet must know she cannot invent something entirely new (material is always recycled), and yet this striving to be immersed in and to break from the material past is the very thing that is required for poetic novelty and power. This would have a psychotheoretical corollary as well: all humans know they are derived literally – through language – from their parents. And yet the very basis of becoming a subject, psychoanalytically speaking, is the difficult but affirmative task of distinguishing yourself effectively from your parents, to have a handle – so to speak – on your genealogy (or even to retroactively recreate it).

a j carruthers is a poet, performer, critic. Recent works are Axis Book 2, the recorded sound-poem Consonata, and visual works all published in Canada: MS Word Variations 1-11, EPSON L4168 consonant studies (Banff: no press) and The Blazar Axes (Calgary: Spacecraft). Is working as Assoc. Prof. at Nanjing University, in China.