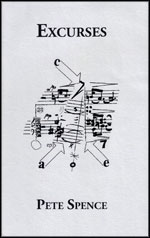 Pete Spence’s chapbook, Excurses, follows closely on the heels of his excellent book-length collection Perrier Fever (Grand Parade Poets, 2011). Long known as an exponent of visual poetry and mail art, Spence’s more ‘conventional’ poetry has, somewhat surprisingly given his long publishing history going back to the 1970s, slipped under the radar to some degree. One hopes these recent books will go some way to rectifying this oversight, for Spence’s work strikes a particularly distinctive note among contemporary Australian poetry.

Stylistically, Spence’s poetry owes much to the first- and second-generation New York School poets – in particular Frank O’Hara, Kenneth Koch and Ted Berrigan – and to a lesser extent, the aesthetic strategies of L=A=N=G=U=A=G=E poetry. And yet, despite these influences, the poetry does not feel imitative or derivative, but instead gives the impression that Spence has taken on board certain principles from the aforementioned poets and shaped them to his own liking. His is a poetry that operates on the presumption that poetry should be ‘entertaining’; as Laurie Duggan notes in one of the book’s blurbs, the ‘battle against boring poetry is never ending … Spence has been around long enough to know this.’ Which isn’t to suggest that the poems lack their share of intellectual rigour, or, as in the collection’s final poem ‘A Little Row of Tones’, a note of seriousness, but rather the poet appears to take delight in undermining any pretensions of ‘insight’ and ‘depth’ that might be associated with capital ‘P’ poetry. As the poem ‘Untitled’ puts it: ‘I don’t know/whether I’m in the mood/for Delius or an apricot/with a little yoghurt on it.’

Like Perrier Fever, the poems in Excurses are highly energetic, leaping from one thought to another in an eccentrically disjunctive fashion, so that in ‘Wittgenstein could have given his brother a hand’ we read: ‘what is/all that muck/on the piano?//all your thoughts need ironing!’ Excurses revolves around the motif of music, lending the chapbook a sense of cohesion, although the individual poems often veer off wildly in whatever direction the apparently spontaneous compositional method leads them:

There is plenty of O’Hara’s ‘just go on your nerve’ approach in work like this and, like O’Hara, Spence makes writing poetry look deceptively simple, although achieving such ‘ease’ is a rather difficult task. It takes a particular sensibility and dexterous craftsmanship to write that ‘a radio is playing/the swansong’:

It is also a poetry that, as mentioned above, invites comparisons of style and allegiance, of influence and, in what might seem a strange thing to suggest in such iconoclastic work, a sense of tradition. In ‘Detours’ we read:

If there’s not an echo of Laurie Duggan’s poetry here, and through him an echo of the poets that he, Spence and other poets working in a similar mode are descended from – let’s call it a kind of irreverent late-modernist aesthetic – then I’m not reading this work correctly. There is a broadly shared conception of poetics informing such work, not a ‘sameness’ certainly, but a desire to challenge what poetry is, what it should ‘do’, what it might incorporate now and what it might suggest for younger poets.

For those unfamiliar with Spence’s work, Excurses offers a fine introduction to his wonderfully eccentric poetry; for those already acquainted with his poems, Excurses is a welcome addition to the oeuvre of an innovative, and I should say important, voice in contemporary Australian poetry.

This entry was posted in BOOK REVIEWS and tagged Cameron Lowe, Pete Spence. Bookmark the permalink.
Cameron Lowe lives in Geelong. Circle Work, his third collection of poetry, was published by Puncher & Wattmann in late-2013.