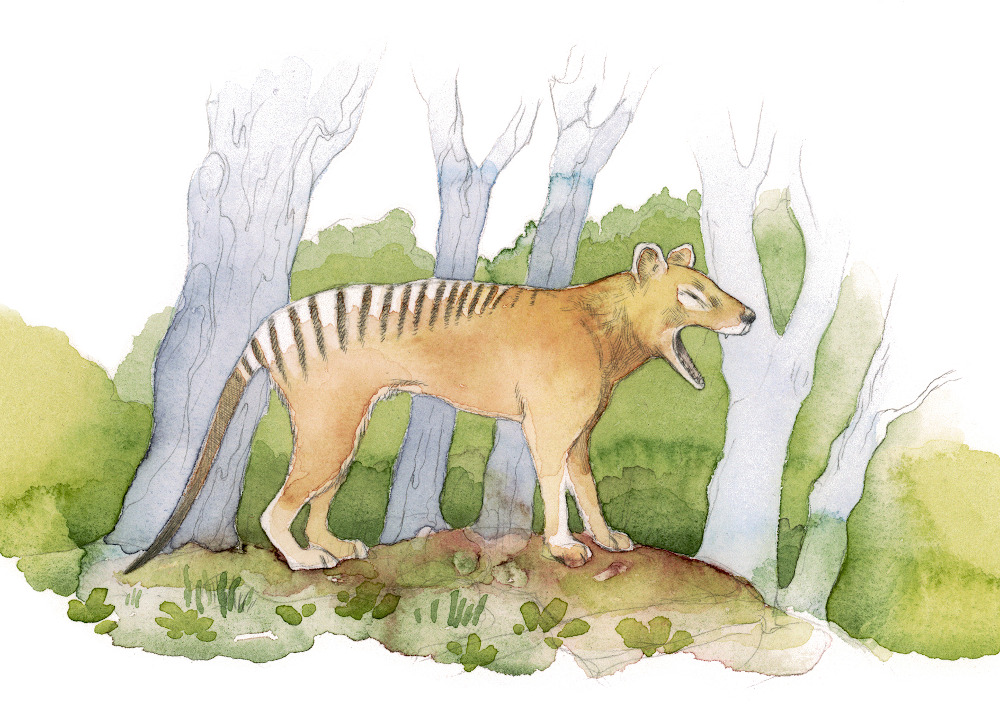 Thylacines were semi-nocturnal ambush predators, preying on birds and small mammals between 5-17 kgs.

The thylacine was one of Australia’s apex predators on the mainland until the introduction of the dingo 5000 years ago. The dingo (Canis lupus dingo) population spread throughout the continent within 100 years.

Due to a combination of Indigenous hunting with domesticated dingo and wild dingo competing for similar food sources, the thylacine became extinct on the mainland 3500 years ago.

Indigenous people throughout Australia have recorded rock art and oral histories of the thylacine. There are rock engravings at Murujuga on the Burrup Peninsula, Western Australia and rock paintings in Arnhem Land, Northern Territories
In South Australia, Adnyamathanha people from the Ikara Flinders Ranges have rock art of the thylacine, which they call Marru Kurli.

Nearby, Kaurna people from Tarntanya (Adelaide) use a very similar name for a dingo: Warru Kadli.

It is thought that Kaurna people such as Adnyamathanha had used the term Warru Kadli for thylacine and, after it became extinct, transferred the name to the newly arrived dingo.

In Iutruwita (Tasmania) the larger species of thylacine is called kaparunina by Pakana people in palawa kani language. Pakana people have recorded stories of the kaparunina.

The British colonisation of lutruwita led to its complete extinction.

The Van Diemen’s Land Company introduced bounties on the thylacine from the 1830s, based on the unfounded belief that it preyed on the colonist’s domestic sheep.

Between 1888-1908 the Tasmanian Government offered a bounty of one pound for an adult and ten shillings for a pup. By 1909 a total of 2,184 bounties had been paid to farmers and hunters.

The last wild thylacine was killed in 1930 and the last thylacine held in captivity died at Hobart Zoo in 1936.