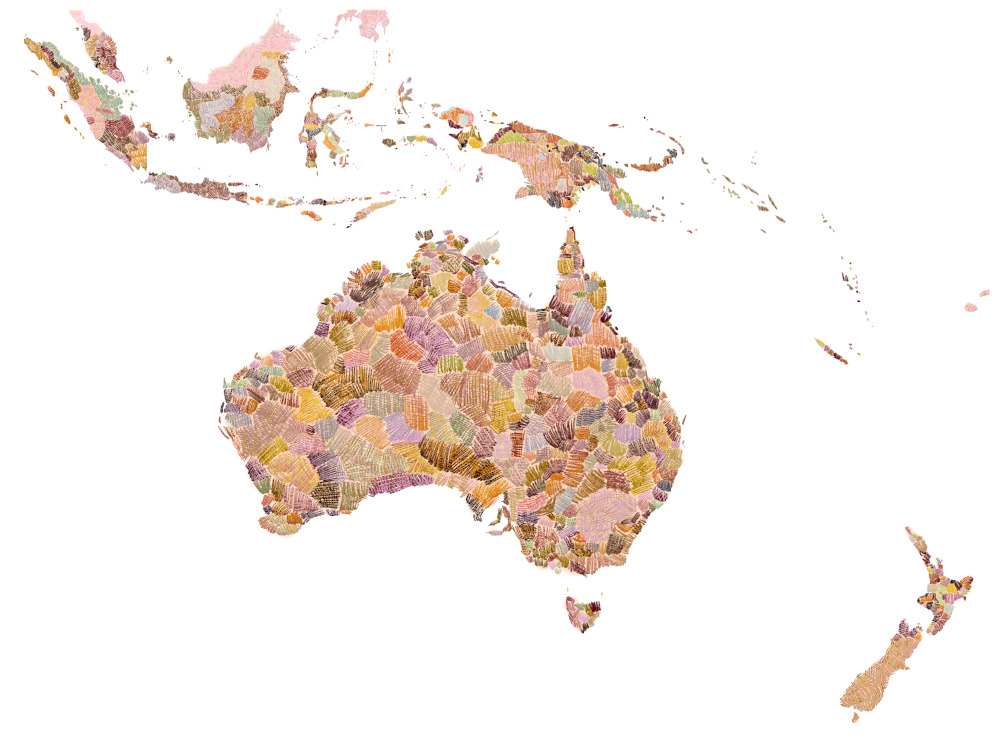 There are 250 Aboriginal nations across Australia and each nation is defined by its own unique territory, language and culture.

Aboriginal languages have connections with languages in Asia and the Pacific. Languages in the Kimberley and Arnhem Land region have been influenced by trading with Makassan seafarers from South East Asia. Aboriginal people on the Northern tip of Cape York have had cultural relationships with Torres Strait Islanders, Papuan in the Pacific for thousands of years. Since European colonisation Indigenous languages have continued to be influenced by intercultural relationships with English, Afghan and Chinese people. This map shows the Indigenous language nations of Australia, South East Asia and the Pacific region prior to European colonisation that began in the 16th century.

Since British colonisation in 1788, many Aboriginal people were displaced from their traditional lands and were removed to Christian missions where Indigenous languages and cultures were forbidden to be practiced. The direct impact is that while 250-300 languages were spoken in 1788, only 120 languages are still actively spoken today and 90% are considered endangered.

Aboriginal nations have their own distinct territories with geographical boundary lines, such as mountain ridges, coastlines or river ways. A good example of the geographical territory borders are the South Australian language groups, the Ngarrindjeri Nation on the lake system of the lower Murray River, Peramangk in the Adelaide Hills, Kaurna on the Adelaide Plains, Ngadjuri in the Barossa Valley and Narungga on the York Peninsula.

Prior to British colonisation, Aboriginal nations were very stable with minor conflict with neighbouring nations. The stability was from good systems of communication. Aboriginal people spoke multiple neighbouring languages and they had several society structures called kinship, moiety and totem systems that help to create intercultural relationships with neighbouring families binding them together to avoid conflict. One of these practices we continue to perform today is the Acknowledgement and Welcome to Country when traveling on someone else’s land.

Aboriginal nations had different forms of government and custodial land ownership. German missionary Christian Teichelmann in 1841 described the Kaurna Nation on the Adelaide Plains in South Australia as a republican tribe and it had a land ownership called Pangkarra where land was passed from father to son. The Kaurna paternal Pangkarra system differs from the majority of Aboriginal nations in Australia, where maternal land ownership is passed down from mother to daughter.
When the British colonised Australia in 1788, they claimed the land was Terra nullius (No man’s land).