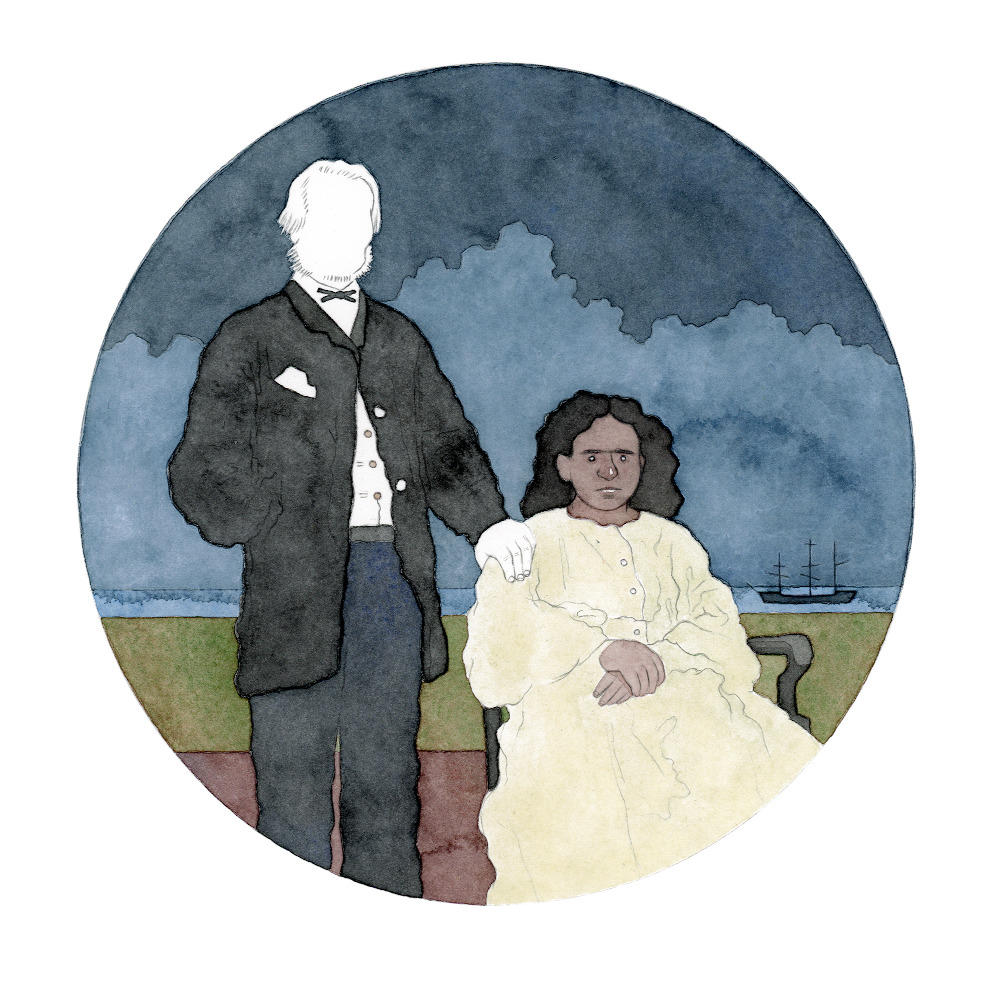 They then took her to Kangaroo Island where she lived for some time. They named her Sarah. Living with the whaler and sealers on Kangaroo Island was harsh and she witnessed violence and sexual assault on the Aboriginal women and violence to Aboriginal men. Kalungku recalled these brutal events:

They cut them with broad sealer’s knives, they cut a piece of flesh off a woman’s buttock, and cut off a boy’s ear, The boy died in consequence of his wounds.

In 1829, sealers William Johnson and Harry Wally tied Kalungku up and forced her on board the schooner Henry owned by John Griffith. She was taken to the Islands in the Bass Strait where Johnson sold her to William Dutton, who was a crew member on the Henry. In July 1829, Kalungku was taken to Portland Bay where Dutton set up a whaling station. During her time at Portland, William Dutton physically and sexually assaulted her and in 1830 Kalungku had a daughter with Dutton at Portland called Sophia. In 1831, Dutton abandoned Kalungku in Portland and went to Tasmania where he met Renaninghe Kotaternner, a Tasmanian Aboriginal woman. In 1834, William Dutton returned to Portland with the Henty Brothers and Renaninghe to set up a whaling station.

In 1832, on Julia Percy Island near Portland, Kaungku had a second child Johnny Franklin whose father was an Aboriginal sealer from Sydney. Later, Kalungku was taken to Woody Island (now named Anderson Island) off Flinders Island, Tasmania, where she lived with Abyssinia Jack, presumably an African American sealer, two European whalers, three mainland Aboriginal women and five of their children until 1837. In 1836, William Dutton with Abyssinia Jack visited Woody Island and he took Kalungku’s child Sophia to live with John Griffith’s family in Launceston, Tasmania.

In June 1837, Kalungku left the sealers and took refuge at Wybalenna Aboriginal Mission on Flinders Island. The Wybalenna Christian mission was established by George Augustus Robinson in 1834 during the Tasmanian Wars to remove Tasmanian Aboriginal people off Tasmania. Kalungku was employed as a domestic servant for George Robinson and he changed her name from Sarah to Charlotte. During this time she became good friends with Truganini. In January 1838, Charles Robinson (the son of George Robinson) recorded her biography and 80 words in Kaurna language.

In February 1839, George Robinson took 13 Tasmanian Aboriginal people as well as Kalungku and her son to Port Phillip Bay, Melbourne to be language interpreters between Robinson and Victorian Aboriginal people. By November, George Robinson realised that they spoke different languages and he requested to the Government that he be relieved of them. He fostered Kalungku’s 7-year-old son Johnny Franklin to a colonial family in Melbourne.

In June 1840, Kalungku and Truganini escaped from George Robinson. His son, Charles Robinson, went searching for them and found them living with European shepherds at Point Nepean. Charles Robinson tried to take them back to his father’s property but they escaped again. In August, he searched again for the two women but only found Truganini.

In September 1841, five Tasmanian Aboriginal people led an eight-week campaign of armed raids against the Victorian colonisers around the Dandenong to Western Port. In the raids they injured four men and two whalers were killed near Western Port. In November the military and Native police captured and arrested them. The two men Tunnerminnerwait and Maulboyheenner were hanged in Melbourne and the three women Truganini, Planobeena and Pyterruner were sent back to Tasmania. It is unclear if Kalungku was with the raiding party as her whereabouts were unknown at the time. It is possible that she participated in the raid and evaded capture.

In 1842, Kalungku was reported to be still in Melbourne to stay close to her son. Kalungku returned to working as a domestic servant for George Augustus Robinson and after he left for England she went to live with his daughter Maria Allen (Robinson) on Clarke Island in the Bass Strait until 14 July 1849. She left for River Forth in Tasmania to be united after 13 years with her daughter Sophia Frances Lee (Dutton). The Lees moved to Launceston in 1852 and Kalungku died on 17 May 1854 and was buried as Charlotte Robinson.